Several cases of kidnapping, violence and other acts against women indicate that Lebanon still has a long way to go in ensuring gender equality. 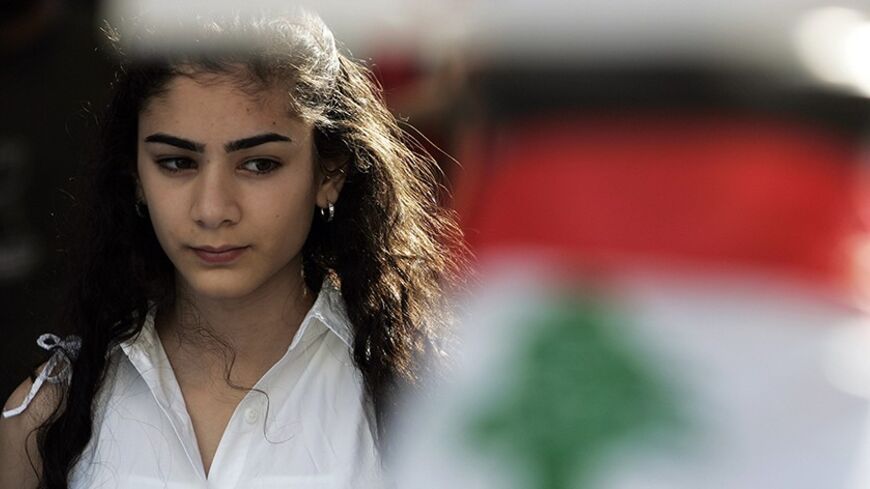 A Lebanese girl is seen behind a national flag in Beirut, May 18, 2008. - REUTERS/Damir Sagolj

Examples of discrimination and worse against Lebanese women are pouring in at an accelerating pace. The examples range from controlling individual behavior to deadly violence. It occurs within the scope of family life — which in Lebanon is governed by varying mindsets of sectarianism, religious fanaticism and outdated ideas —and within the realm of public and personal life. There have even been attempts to impose foreign values and norms on women beyond the country’s laws and regulations and with which Lebanon has had no experience.

A brief inventory of the most recent such incidents will suffice. In October, a teenage girl named Eva was kidnapped and forced to marry, after which it appeared that such acts had become normal, especially involving Syrian refugee girls. Lebanese media and women's rights organizations often publish reports and investigations about the — often miserable — conditions of displaced Syrian girls, women and even children. Some nongovernmental organizations have reported the spread of prostitution among Syrian refugees. There have also been reports of “set prices” for marriages and the selling of Syrian girls. As this phenomenon has spread, so has the number of security incidents, especially in some remote, rural and agricultural areas of Lebanon such as Akkar, in the far north.

On Jan. 24 in Akkar, another Lebanese girl, age 12, was kidnapped for marriage. Despite the uproar that women’s organizations tried to raise against the kidnapper, who had clearly committed a crime, the case ended with the girl marrying her kidnapper — with her family’s consent and with the blessing of the so-called religious courts in Lebanon. In this case, the sect in question was Sunni Islam, which, according to some interpretations, allows the marriage of girls as soon as they reach the age of menstruation, typically between 9 and 13.

The motivations of parents to allow their young daughters to be married range from financial need to hiding the “scandal” in case the girl returns to her parents’ home. In addition, there is a mentality influenced by a religious view that accepts and justifies such actions. Some Islamic sects in Lebanon not only permit marrying minors but also allow polygamy, whereby a man can have up to four wives at the same time.

Because such violations of the law often end up with no one being punished, they get repeated, whether in Akkar or elsewhere in the same type of religious environment. For example, on Feb. 4, it was learned that someone had kidnapped a 14-year-old to pressure her parents into allowing them to marry. The girl's parents rejected the kidnapper's demand, so the case went to the state authorities, who proceeded to raid the kidnapper’s house and free the child. It is unclear whether the kidnapper was referred to the judiciary for processing. Lebanese law provides for one to three years in jail for kidnapping a minor with the intent of marriage.

After the sense of relief felt at the news that the 14-year-old had been freed, the Lebanese awoke the next day to a truly tragic story. A man had beaten his wife to death. This time, it was in Beirut, not Akkar. The details of the crime, revealed later, were shocking. The attack took place in front of the family of the victim, who were unable to help her. Worse, people near the victim’s home did not respond to her cries of distress nor to those of her family. Why?

The reasons may be many, but without doubt, one of them is the entrenched cultural attitude regarding the “sanctity of the home,” where the man is considered the king of the house and lord over all its contents, including the lives of the people who live there, especially females.

In addition to the kidnapping and violence, Lebanon experienced another form of discrimination against women, this time in sports. What happened broke neither Lebanese law nor Olympic regulations.

On Feb. 10, social media circulated pictures of the Lebanese skier Jackie Chamoun doing a photo shoot for a foreign company. Chamoun fleetingly appears topless during quick, transient moments in the shooting of a tourist calendar. The shoot took place more than three years ago, but the pictures were released as the skier was participating at the Sochi Winter Olympics, representing Lebanon.

Suddenly, government and sports officials proclaimed that what Chamoun had done was a violation deserving of punishment. Minister of Youth and Sports Faisal Karami declared the images harmful to Lebanon’s image abroad. Then came a shocking statement by the Lebanese Olympic Committee, which, after an extraordinary meeting, requested that the government consider the matter grounds for a lawsuit and condemned what had happened. The committee also announced its intention to suspend Chamoun from participating in international sport competition after returning from Sochi.

The decision of the Lebanese Olympic Committee was contrary to the provisions of the Olympic Charter as well as a decision by the International Olympic Committee, which looked into Chamoun’s case and deemed it a personal matter, especially since it did not take place during an Olympic Games.