"Uneven" and underage marriage in Iraq, a long-standing tradition among rural communities, is now spreading to the cities and is accepted by many. 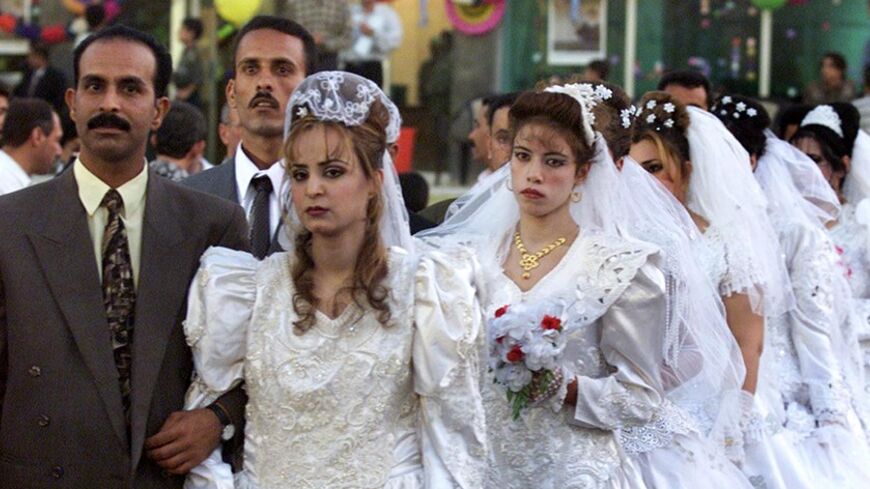 Rumors circulated that a man in his 90s who had married a girl 70 years his junior had died recently in Salahuddin province, north of Baghdad. This shocking news is only one part of the “uneven marriages” that have become endemic among Iraqis where social traditions and habits are reinforced by tribal authorities and applicable laws. Meanwhile, civil society and human rights organizations stand idly by, failing to intervene to stem the prevalence of such marriages, especially the forced marriage of underage girls.

Alia Kadi, a social researcher, told Al-Monitor, “These marriages are 'spawned' by rural areas and poor neighborhoods, where customs and traditions are rife. The people in these areas are conservative and do not accept new concepts. They do not easily replace their cultural and social legacies, and they warn against openness to contemporary civilization.”

Kadi continued, “Even big cities are affected by the culture of these areas, not the other way around, because of the intransigence and intolerance that characterize the local, close-minded culture. This mindset has spread in the cities, following the collapse of its vulnerable, recently developed modern social structure in the face of the rural culture, which derives its strength from tribal laws and misinterpretations of religion.”

One of the reasons for early marriage can be seen in the following real-life example. A Babil man named Marza Hamdan, also known as Abu Ali, supports his five daughters on a pension of less than 300,000 dinars (less than $300) a month. He therefore had to marry off his 16-year-old daughter to an upper-class man in his 60s.

In an interview, Abu Ali shared with Al-Monitor, “Poverty was an important reason that led me to agree to this marriage.” In addition, he fears that his daughters will remain unmarried and deviate from the morally acceptable behaviors of Iraqi society, which according to him, has begun to lose a great deal of its ethics and values. He further revealed, “The mother of my daughters died years ago, and they had to drop out of school, because of the education fees. Then they started working for a daily wage.”

The economic situation indeed plays a role in “legitimizing” underage marriages. Sheikhs and other men in general link their sexual desire to their need for children, who will carry out agricultural production. Thus, increasing the number of offspring becomes a pretext for agreeing to uneven marriages, which eventually collapse because of the moral and social differences inherent in the age differences.

The negative health effects on girls from this type of marriage seem to be of secondary or no concern to many people due to their ignorance or illiteracy. Dr. Zainab Fadel confirmed to Al-Monitor, “The marriage of a minor entails health risks for her. For instance, pregnancy becomes a high risk in her life, because of the possibility of miscarriage and severe bleeding.” She called for “enacting laws to promote marriage at a safe age.”

According to the Iraqi Ministry of Planning, of the total number of married women in 2013, 11% were in underage marriages. Experts stress the need to raise awareness of the dangers of this phenomenon by supporting civil society organizations addressing social issues, in particular women’s issues, and through media platforms and outlets.

Ali al-Atabi, a sheikh from Najaf, told Al-Monitor, “The use of religious platforms in this quest would be very helpful, as many are affected and influenced by religious circles in society.” He also pointed out, however, “Islamic law does not allow raising the legal age for marriage [considering that] ordinances to do so have nothing to do with religion.”

Regarding efforts to stanch this phenomenon, Ismail Hassan, a lawyer, said to Al-Monitor, “There is a need to find the roots of this phenomenon and treat it on a legal level, as the Iraqi Personal Status Law allows the marriage of girls as of the age of 15.”