Iraqi Turkmen are getting pressure from the Turkish government to work more closely with the Kurdistan Regional Government (KRG) of Iraq. 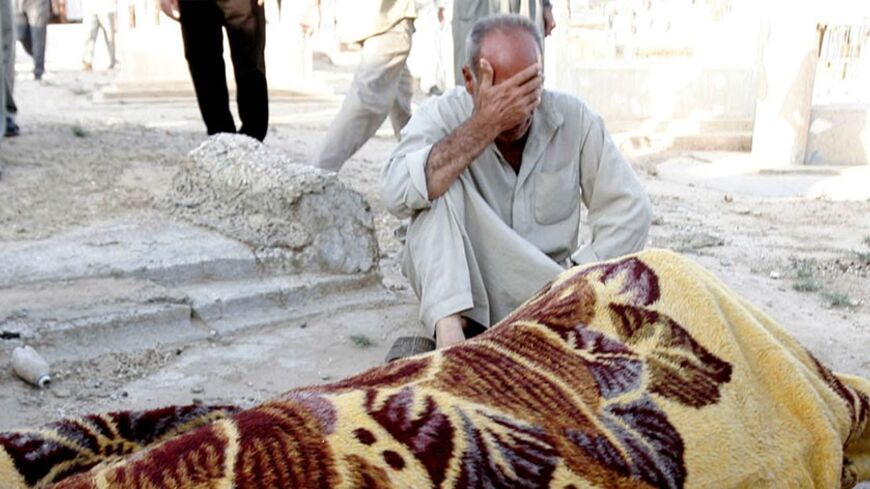 A man mourns near the body of his brother, wrapped in a blanket, who was among those killed in a suicide bomb attack at a popular coffee shop in the town of Tuz Khormato in Iraq, July 17, 2006. - REUTERS/Slahaldeen Rasheed

While Iraq’s April 30 general elections approach, the bets are slowly coming up for grabs. The polls matter not only for the Iraqis. The vote, the first since the end of the US occupation, is as crucial for regional actors Turkey and Iran as it is for the United States’ so-called “democracy project.”

Turkey counts on a scenario where Maliki is sidelined by Shiite rivals of his State of Law Coalition, including Ibrahim al-Jaafari’s National Reform, Ammar al-Hakim’s Islamic Supreme Council of Iraq and the Sadr movement. Yet, predictions are difficult to make in a political landscape where 270 parties and 70 coalitions contest the polls, and Maliki still has room to maneuver.

Moreover, the Iraqis I talked to point out that Shiite perceptions of Turkey have soured after the Justice and development Party (AKP) government granted asylum to Iraq’s former Vice President Tariq al-Hashimi. Thus, even a Shiite-led government without Maliki does not guarantee a new chapter with Baghdad for Ankara.

There are other serious obstacles, too. Both Shiites and Sunnis have come increasingly to believe that Ankara’s strategic ties with Erbil are a major factor emboldening the Kurdistan Regional Government to drift away from Baghdad. Turkish officials, on the other hand, say privately that too much foot-dragging by Baghdad over a pipeline to carry Basra’s oil to Turkey compelled Ankara to “force certain things” and opt for an oil deal with Kurdistan, braving Maliki’s ire.

What is even more intriguing, Turkey — while courting Erbil to get what it lost in Baghdad — is also about to waste its Turkmen card, which it has already misused for years. Both Turkmen representatives and diplomatic sources say that Turkey, due to its pro-Sunni leaning, has already alienated the Shiite Turkmen.

A Turkmen academic in Baghdad told Al-Monitor, “Turkey’s sectarian policy has pushed the Shiite Turkmen under Iran’s influence.” According to the academic, “Sunni Turkmen are present in the ranks of al-Qaeda, which has been attacking Shiite Turkmen in recent years. Some al-Qaeda-linked people have used buildings of the Turkey-backed Iraqi Turkmen Front (ITF). As a result, the Shiite Turkmen’s attitude toward Turkey has changed.”

Fevzi Ekrem, a former Shiite Turkmen parliament member from the Sadr movement, dismissed allegations that the ITF made its buildings available for al-Qaeda’s use. Yet, he, too, criticized Turkey for acting as if all Turkmen were Sunni. “The Shiite Turkmen feel they are treated as a stepchild,” he told Al-Monitor.

Ekrem, who identifies himself as “a patriot and nationalist above sects,” said the Turkmen had lost ground not only because of the Kurds, al-Qaeda and the Maliki government but also regional players such as Iran, Turkey and Saudi Arabia. Born to a Sunni-Shiite couple, Ekrem described the gloom in Tuz Khormato to illustrate the Turkmen resentment: “Over the past two years, we have lost 1,000 people in bomb attacks in Tuz Khormato. Another 4,000 have been wounded. Another 165 people have been kidnapped on their way home or to school, and remain unaccounted for. The attacks target the Turkmen neighborhoods in particular. Turkmen who fled the town have formed two whole neighborhoods in Karbala and Najaf. Some have fled to Baghdad as well. Christian Turkmen — the so-called 'fortress infidels' — have also fled the town. The truth is that no one really helped the Turkmen — neither neighboring countries nor the Sunni and Shiite political groups in Iraq. … The neighboring countries are playing a grave game; they want to make Iraq a second Syria. The Turkmen are the big losers, be they Sunni or Shiite. I’ll try to expose this tragedy at an exhibition I’m planning to open soon on al-Mutenebbi Avenue.”

Certainly, not all Turkmen are as pessimistic as Ekrem. A Turkmen employee at a construction company in Baghdad argued that all Iraqi communities were hit by violence and suffered. He underscored that the Turkmen were represented by seven lawmakers and three ministers, and that the government was taking steps for broadcasts and education in the Turkmen language. He was optimistic the community’s conditions would further improve.

For years, Turkey used the Turkmen card both against the central Iraqi government and the Kurds. Now the nature of the card appears to be changing. “Turkey is now advising us to get closer to the Kurdistan administration. This has sparked serious reactions among the Turkmen,” a Turkmen official said.

A small Turkmen faction, including the Iraqi Turkmen Fraternity Party, favors cooperation with the Kurds. Yet, their favorable stance stems from skepticism toward both Iran, which uses the Shiite card, and Turkey, which counts on the Sunni card.

However, neither the ITF, which Turkey has not only backed but used as a tool, nor Shiite Turkmen groups such as the Iraqi Turkmen Islamic Union that aligns with Shiite Arab parties promoting Iraq’s integrity, are likely to engage with Kurdistan.

Even Turkmen currently in touch with the Kurdish region become agitated when it comes to Kurdish claims over the oil-rich city of Kirkuk, the much-coveted “Kurdish Jerusalem.”

Ekrem was equally resentful: “We are being advised to take advantage of the Turkey-Kurdistan rapprochement, but the Kurdish administration has never reached out to us. They have had an eye on our lands, and nothing has changed since 2003. This is not an easy problem to solve. We’ve been through a lot. Those who usurped our lands are out there. The Turkmen population in Erbil has melted away. [Iraqi President] Jalal Talabani does not have a single Turkmen [on his team]. How are we supposed to engage in dialogue under these circumstances?”

While Turkey’s Kurdish and Turkmen cards are failing to yield the desired results, Iran’s maneuvering ability stands out on the Iraqi scene. Despite Turkey’s regional ambitions, it is Iran that has stepped in to settle the in-house rift at the Patriotic Union of Kurdistan (PUK) when it plunged into a leadership crisis after Talabani bowed out. When it comes to efforts to end the political impasse in Kurdistan — without a government for six months — it is again Iran out on the field. The most influential of the Turkmen card is similarly in Iran’s hands.

Having taken the Turkmen for granted, Turkey has only recently realized why they have entered the Iranian sphere of influence. According to a Turkish diplomat, lessons have been learned from past mistakes and a new approach is under way vis-a-vis the Shiite Turkmen. Yet, it seems hard for Ankara to make up, given the perceptions its regional policies have created in Iraq. Gestures like visits to religious shrines appear to just not be enough.