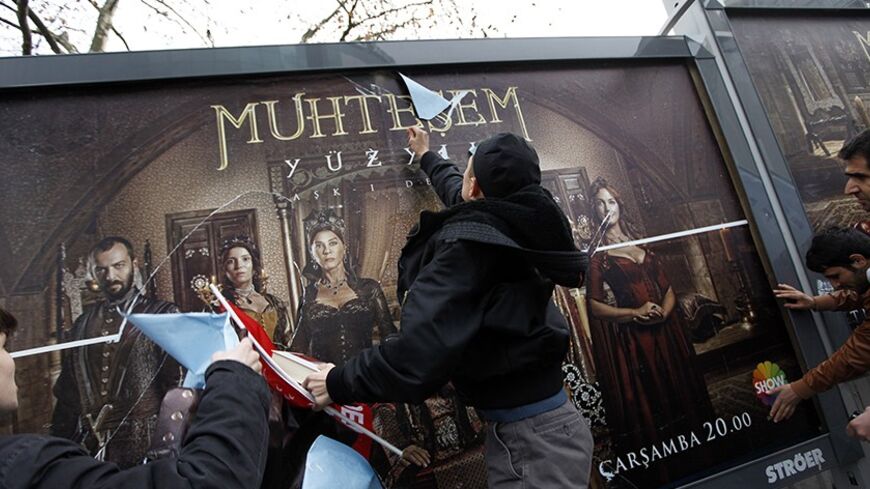 Demonstrators throw eggs and attack billboards advertising the TV series "The Magnificent Century" during a protest near the show TV headquarters in Istanbul, Jan. 9, 2011. - REUTERS/Murad Sezer

Ever since it came to power, the government of Turkish Prime Minister Recep Tayyip Erdogan has been publicly invoking the country’s Ottoman heritage, with an understanding that the epoch represents the best of times of this nation, particularly when compared with the Republican era. No wonder Hasan Koz, 47, a Turkish citizen living in Bursa, took the popular television series “Magnificent Century” so seriously. The show is about the life and times of the 10th Ottoman sultan, Suleiman the Magnificent, also known as Kanuni (the Lawmaker).

In its last episode last week, this television series showed the killing of Mustafa, the sultan’s eldest son, upon his father’s order due to an intense suspicion that he was preparing to rebel against his father to take over the throne.

Koz filed a complaint Feb. 15 at the Bursa courthouse — more than 460 years after Mustafa’s murder — saying that Sultan Suleiman, his wife Hurrem Sultan (Mustafa’s stepmother) and Rustem Pasha, grand vizier to the sultan, were responsible for “provoking people to hatred and revenge” and “instigating the strangling” that brought about the demise of the sultan’s eldest son.

While no court will decide to hear such a case, this is yet another great example of how people often learn about history through movies or television series, and consider such works of drama as historical documentaries. No one today can actually know exactly what took place during Mustafa’s killing, but it is a fact that he was killed on his father’s orders. Yet, people’s reawakening to their common historic heritage deeply hurts them. Erdogan reacted on Feb. 16, saying, “We are not the grandsons of the Kanuni who is portrayed on the television screens. We are the grandsons of the real Kanuni.”

Akin Unver, assistant professor of international relations at Kadir Has University in Istanbul, told Al-Monitor, “A country’s history and the collective memory of that history are two different things. While history is a scholarly endeavor, popular interpretations of that history are better referred to as a narrative. While history is a solid domain with documents and artifacts establishing a society’s connection to its past, narrative is fluid and functions within the present tense — the latter interprets the former.” He added, “What has been happening in Turkey in the last decade isn’t a rediscovery of history, but a transition between two competing narratives of it; one interpreting the past in terms of its more cosmopolitan, heterogeneous components and the other focusing on the aspects of the past that feed Turkey’s current cultural centralization. To that end, popular outlets such as soap operas and movies act as strong primers for a society that is trying to rearticulate its narrative.”

Unver also said, “That is why, for example, an interpretation of 'Muhtesem Yuzyil' [Magnificent Century] can run into a major conflict with these communities’ narratives of the past. It doesn’t matter whether [that] narrative fits into historical reality or not; the narrative lives in the present tense. That is also why Prime Minister Erdogan doesn’t say, 'Such things never happened in history,' but he instead says, 'We never knew such a history' — indicating that his power base focuses less on actual history but more on a glorified narrative of it.”

It indeed is all about the glorification of the Ottoman era while putting down the accomplishments of the Republican years until the Erdogan government came to power. Take Turkish Foreign Minister Ahmet Davutoglu’s remarks from March 2013. He claimed that Turkey for the first time had finally returned to the lands lost during the Ottoman times. “The last century was only a parenthesis for us. We will close that parenthesis. We will do so without going to war, or calling anyone an enemy, without being disrespectful to any border; we will again link Sarajevo to Damascus, Benghazi to Erzurum to Batumi. This is the core of our power,” he said. “These may look like all different countries to you, but Yemen and Skopje were part of the same country 110 years ago, or Erzurum and Benghazi. When we say this, they call it 'new Ottomanism.' The ones who united the whole of Europe don’t become new Romans, but the ones who unite the Middle East's geography are called new Ottomanists.”

While it is all said well, the Erdogan-Davutoglu team unfortunately fails to correctly grasp the lessons of the past, as if falling into a denial of living in the present, and therefore continuing to measure the country’s influence over the former Ottoman lands out of context — and detached from reality. Koz, this ordinary citizen from Bursa, is a reflection of the Erdogan government’s approach to the past, and he — just like them — tragically considers that his complaint is relevant for a present-day Turkish court to handle.

This is, however, not the first time this soap opera received Erdogan’s ire. In December 2012, Erdogan reacted strongly to the scenes that showed Sultan Suleiman with his wife Hurrem, who was portrayed by Meryem Uzerli, an exceptionally beautiful actress, in their somehow intimate moments without showing flesh. “We don’t have such ancestors. We did not know of such a Kanuni: 30 years of his life [his reign] was spent on the horseback. He did not spend time at the harem as is being presented [on 'Magnificient Century']. I condemn the producers of this television series before the eyes of our nation,” Erdogan said. The following episode immediately revealed the impact of the prime minister’s criticism, and Hurrem appeared for the first time with a full head cover, praying for the health and well-being of the sultan.

In conclusion, such television series need only be praised for providing people a glimpse of history. It is, however, the people’s responsibility also to be fully aware that this is historical fiction; if they are really interested, they need to do some studying. To see a record number of Turks visiting Mustafa’s tomb in Bursa, where he was laid to rest next to his mother, Mahidevran, is a good thing in that it shows people are sincerely touched by this page of Turkish history. As much as that era is difficult to understand with today’s logic, one can only hope that the country’s Islamist base — which seems to be having a powerful struggle with the Republican era — will show some tolerance and understanding and choose to live in the present, rather than preferring to continuously glorify a past that is long gone. Also, what does get glorified is likely either exaggerated or illusionary.

That is the only way this nation can actually overcome its identity crisis — by leaving the past in the past with all the good and bad parts of it, and accepting that time only flows forward. If people insist glorifying the past, though, the obvious question is this: How could one feel so proud of an ancestor who literally ordered the killing of his own flesh and blood for the sake of staying in power? Can any father explain that in today’s mindset?