Is Turkey's 'Magnificent Century' A Threat or Asset?

How Turkey's "Magnificent Century" soap opera, depicting the life and times of an Ottoman sultan, has managed to draw both fans and critics from the country's neighbors. 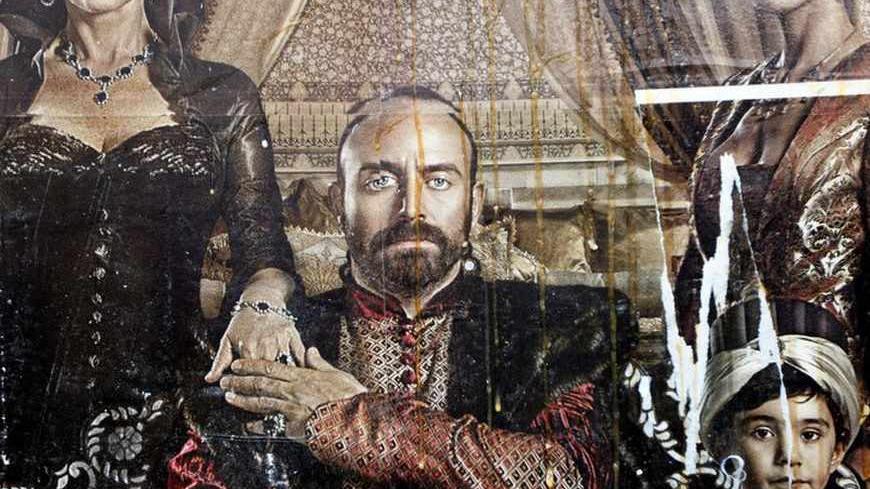 A billboard advertising the Turkish TV series "Magnificent Century" is seen after being damaged by eggs thrown by pro-Islamist protesters in Istanbul, Jan. 9, 2011. A steamy television period drama about a 16th century sultan has angered conservative Muslims in Turkey and sparked a debate over the portrayal of the past in a country rediscovering its Ottoman heritage. - REUTERS/Murad Sezer

If you know anything about Turkey, you’ve surely heard of the country’s famous soap opera, "Magnificent Century,"  which portrays the life and times of Ottoman Sultan Suleiman the Magnificent (1494-1566). The show, despite its controversial nature, is so popular that even the Chinese have set their eyes on it. It was confirmed in June 2013 that “Magnificent Century” will soon be broadcast on China’s CCTV, Italy’s Babel and Lithuania’s LNK. These new outlets mean the show’s audience will span across 48 territories, reaching more than 200 million viewers.

The soap opera is based on the life of Suleiman the Magnificent, the longest-reigning sultan of the Ottoman Empire. During his reign, between 1520 and 1566, the empire reached the height of its power. Yet, the problems with the show, labeled by The New York Times, as “a sort of Ottoman-era ‘Sex and the City,’” arose from the focus on Suleiman’s joie de vivre and harem heartaches, instead of emphasizing his battlefield successes.

Turkish Prime Minister Recep Tayyip Erdogan has criticized the show’s representations of Suleiman as more of a sensualist than a lawmaker who “spent 30 years on horseback, not in the palace, not what you see in that series.” The New York Times depicted this criticism as being set amidst “a growing culture war between the governing party, which has Islamic roots, and the country’s more secular purveyors of culture in film and television.” Though this statement is not untrue, it seems prudent to relativize the blame on Erdogan’s Islamic roots here, and acknowledge that historical representations on screen have caused cultural wars in many non-Muslim countries as well. Hollywood, in particular, has been the Mecca of spurring this sort of feisty debate.

Despite these issues, the show has found mass audiences among Turkey's neighbors — even as many question its historical accuracy. In Croatia, Serbia and Bosnia and Herzegovina, the show has been broadcast since last year. As summarized in Klara Volarić’s July 2013 article in Toplumsal Tarih, “Reactions to 'Magnificent Century,'” the show’s producers have found a magic formula. Even the strongest of nationalisms, such as those in the Balkans, could do nothing to crush the commercial success of the hit series. Love it or hate it, audiences are hooked on the story.

Volarić writes that Serbian audiences have reacted angrily to "Magnificent Century." Even though the show is incredibly popular, a public debate has revolved around what is perceived to be the show’s dramatic manipulation of Serbian history — the Serbian state was even accused of permitting the spread of “Turkish propaganda.” One such example of a perceived skewed history is the occupation of Kalemegdan fortress and Serbian capital. "Magnificent Century" depicts the historic event in a scene with Suleiman’s call for “death to infidels.” By the next scene, he has already conquered the Serbian capital even though in reality, it took Turks four months of heavy battles before the final conquest of Belgrade in 1521.

Even more interesting were the reactions to "Magnificent Century" in Bosnia and Herzegovina, my country, where, as Volarić explains, historical representations were protested for different reasons. The show has reportedly neglected to pay enough attention to the fact that some of the most important figures at the time were Bosniak, including Suleiman’s mother Aishe Hafsa Sultan (whom Serbian sources on the other hand cite as a Christian, named Katarina at birth) and Ibrahim Pasha (portrayed in the show as a Greek Muslim convert).

Between 1544 and 1612, there were dozens of Bosniaks who had obtained the highest state and military rankings. Bosnian was even one of the four official languages in the Sultan’s palace. In spite of the show’s oversights, ultimately, as elsewhere in the Balkans, the locally named "Magnificent Suleiman" received ratings unparalleled to any other soap operas.

As popular reception in the Balkans has shown, it might be worthy to recall the delicate act of playing with history for commercial purposes. Many Hollywood films have prompted negative reactions about their (mis)representations of historical events. For example, a New Yorker critic claimed that the emphasis of director Steven Spielberg’s film Lincoln on the president’s actions diminished the efforts of those who contributed to slavery’s end. Russians were bothered by director Quentin Tarantino’s Inglourious Basterds and the film's perceived lack of recognition for scale of their losses in WWII. And then came his Django Unchained, which triggered a wave of discontent and discussions on racial issues — parallel with great profits at the box office.

The power of Hollywood to create cultural products in the market is undeniable, so is its responsibility for the values it sets through its products. In the same way, with the widely documented success and popularity of Turkish soap operas, these soaps’ impact on Turkish society and abroad is unquestionable. So, while Prime Minister Erdogan could be rightly criticized for particular strategic mistakes he’s made in the past, it seems a bit unfair to be blind to political stakes in what gets visually portrayed as history.

While Erdogan is blamed for not wanting a particular kind of Suleiman to be portrayed, the US government is, as noted by Salon, “operating quietly, invisibly and ubiquitously” in order to influence “entertainment products that do not seem political in nature,” just as it did with the film Zero Dark Thirty.

Oktay Saral, a ruling Justice and Development Party (AKP) Istanbul deputy, called for a law that would control filmmakers’ conduct “in compliance with Turkish family structure and moral values without humiliating Turkish youth and children.” Of course, such a decision would be wrong, for Turkey must embrace different identities, and avoid a sole dictate of values.

While the bill went nowhere, Saral’s proposal found support among members of opposition parties, mainly the Nationalist Movement Party and the secular Republican People's Party. (Hence, another reality check in distinguishing between Islam and Turkish conservatism and nationalism, as the characteristics of a culture along different party lines.)

Note that in the US entertainment business, as incredible as it might seem, the US military edits scripts of some films “so that the final product is as ideologically pro-military and supportive of existing military policy as possible,” also according to Salon.

So, "Magnificent Century" was not banned, and certainly should not be banned, even if Erdogan dislikes it. Still, the show’s producers might want to seriously consider the environment in which they operate. This is an opportunity to engage large audiences in reconciliatory ways, rather than agitating entire populations’ cultural sensitivities.

Besides all that, once the show broadcasts in China, one can expect a larger influx of Chinese tourists to Turkey. As a fond lover of economic opportunities, I am certain Erdogan would not mind that side effect of the show.