Eighty-four influential Americans, including former senior US government officials, have written to US President Barack Obama, urging him to speak out against Turkish Prime Minister Recep Tayyip Erdogan’s anti-democratic practices. 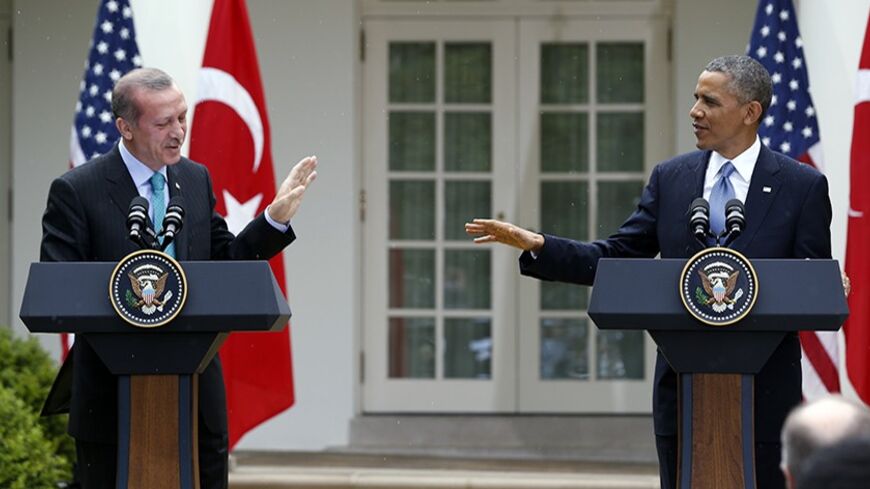 Those paying close attention to Turkey in Washington must be confounded. What are they to understand from a White House statement and a letter written by 84 people, some of them world-renowned, to President Barack Obama about Recep Tayyip Erdogan and Turkey?

Those reading these two texts on the same topic may have problems about how are they to read and interpret them. Not only those living in Washington, but those who are interested in the United States and Turkey and read the two texts via the Internet will also have problems reaching conclusions.

Obama spoke by telephone with Turkish Prime Minister Recep Tayyip Erdogan late Wednesday. Normally, that would be considered routine, because the Turkish prime minister long enjoyed the reputation of being the foremost leader that Obama spent time with on the telephone. That was, until the Istanbul Gezi Park events erupted in the summer of 2013. Only two weeks before the Gezi events, Erdogan was received with the highest protocol in Washington. However, after Gezi all that became history. A chilly encounter followed at the G-20 meeting in St. Petersburg on Sept. 5-6, 2013, and a brief phone conversation, once.

The significance of the last event was that it was the first time since the graft scandal erupted. Reuters reported that they discussed regional issues but also stressed the importance of Turkey’s democratic stability.

A White House statement said the following: “[Obama] noted the importance of sound policies rooted in the rule of law to reassure the financial markets, nurture a predictable investment environment, strengthen bilateral ties and benefit the future of Turkey.”

On Thursday, before the pundits had time yet to analyze and digest the content of the White House statement on the Obama-Erdogan telephone conversation, a bipartisan letter signed by 84 prominent and former US lawmakers, government officials and national security experts as well as Turkey specialists was delivered to Obama urging him “to make it clear, privately and publicly, that Prime Minister Erdogan’s autocratic actions and demagoguery are subverting Turkey’s political institutions and values and endangering the US-Turkey relationship.”

In a news exclusive, The Daily Beast’s Josh Rogin said of the letter: “According to the experts and former officials, Obama has been turning a blind eye to Erdogan’s descent into autocracy. In their opinion, this alarming trend in Turkey has accelerated since last summer, when Turkish authorities used a heavy hand to disperse street protests and Erdogan denounced the protesters as 'looters' while blaming foreign conspirators for the unrest.”

Addressed to “The Honorable Barack Obama,” the letter starts with “Dear Mr. President,” and the following introductory paragraph sums up the rest of the three paragraphs:

“Prime Minister Recep Tayyip Erdogan is increasingly undermining a central pillar of the decades-long, strategic US-Turkish partnership: Turkey’s growing democracy. We are writing because of our deep dismay at this development and to urge you to make clear to the Turkish public America’s concern about Turkey’s current path. Silence will only encourage Prime Minister Erdogan to diminish the rule of law in the country even further.”

Eighty-four signatures under the letter are important. Among them are well-known names in Washington’s media and intellectual circles, such as famous neocons Elliott Abrams, William Kristol, Reuel Marc Gerecht, John Bolton, Mort Zuckerman, Martin Peretz, Leon Wieseltier; also, Tom Dine, Joshua Muravchik, John Podhoretz and Danielle Pletka, as well as influential names such as Dennis Ross, Dov Zakheim, Paul Bremer, Anne-Marie Slaughter, Paula Dobriansky, Dan Senor, former Minnesota Governor Tim Pawlenty and, most importantly, former Sen. Joseph Lieberman — who all have served in the US government. Add to them two former US ambassadors to Turkey, Morton Abramowitz and Eric Edelman, and people whose democratic credentials cannot be disputed, such as Carl Gershman, who runs the National Endowment for Democracy; David Kramer, who leads the Freedom House; and, Turkey expert Michael Werz of the Center for American Progress, which is identified as Obama’s think tank.

While these “inside the Beltway” personalities ask Obama to take a stand against Erdogan’s “drifting to autocracy,” the White House in response to the critical tone of the signatories can say that Obama in his conversation with Erdogan had emphasized “the importance of sound policies rooted in the rule of law.”

One can easily claim that the words “importance of sound policies rooted in the rule of law to reassure the financial markets, nurture a predictable investment environment” were selected very meticulously, and if read from the end, Obama was not conveying a wish but sending a veiled threat to Erdogan.

What I understand from the surprise phone conversation is that such letters as the one signed by 84 prominent Americans don’t have much influence on the White House. The mood about Turkey in Washington is already negative and dialogue is at a minimum. Nevertheless, decision-makers in Washington, no matter how upset they may be with Turkey, still have to work with it, given its weight in the region. Erdogan’s associates will comfortably refer to the last telephone conversation as “relations with Washington are normal. Business is as usual.”

But as a veteran observer of Turkish-US relations I must underline that the above-mentioned letter is of an unprecedented nature between two allies and in bilateral relations. The last time “Washington circles” resorted to such a move was about Iraq and targeting Saddam Hussein.

That is why the Obama-Erdogan phone conversation and the letter delivered to Obama the next day must be recorded as a major step in US-Turkey relations — because it is unprecedented.

Surely, on the day the White House announced the receipt of the letter to Obama, they must have read the following title in The Wall Street Journal that in a way confirmed the contents of the letter: “Turkey Moves to Broaden Agency Powers.” The first sentence of the news report was: “Turkey’s government submitted a draft law designed to give sweeping additional powers to its intelligence services, its latest move to expand executive control over key institutions ahead of pivotal elections.”

The move’s repercussions in Turkey itself may irritate Obama or anyone in Washington who might insist in turning a blind eye toward Erdogan’s drift to authoritarianism in Turkey. Erdogan’s critics in Turkey interpreted the move in quasi-consensus as a step forward in “establishing a mukhabarat state in Turkey reminiscent of the Baath regime of Bashar al-Assad” next door in Syria.

Whether this is an aberration or not, it is not clear yet. What is quite clear is that Erdogan is becoming a liability more and more for Obama to have on board as a strong and reliable friend and ally.