Obama, Erdogan speak for the first time since graft probe

US President Barack Obama and Turkish Prime Minister Recep Tayyip Erdogan spoke on Feb. 19 for the first time since the corruption scandal emerged, with Obama stressing the importance of "a strong, mutually respectful bilateral relationship" with Turkey. 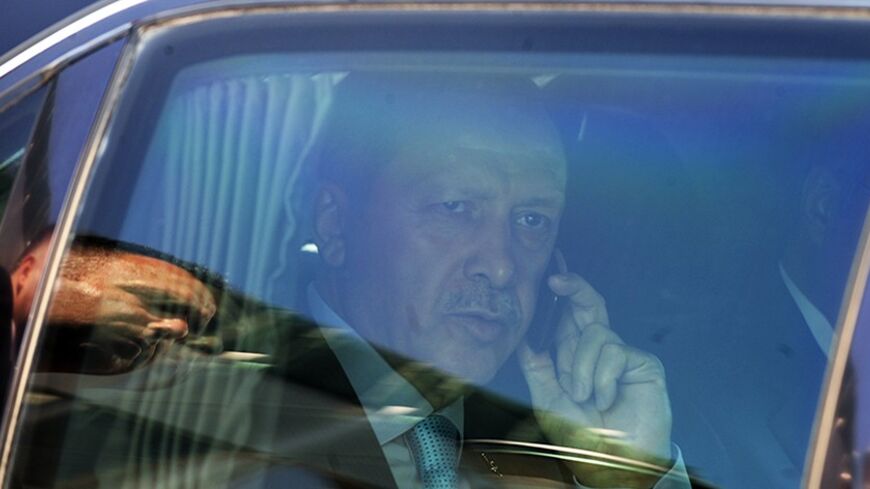 Recep Tayyip Erdogan speaks on the phone in his car, Sept. 29, 2011. - REUTERS/Ognen Teofilovski

On Feb. 19, US President Barack Obama had his first conversation with Turkish Prime Minister Recep Tayyip Erdogan since the latter's government came under a corruption and bribery investigation two months ago. While Erdogan framed this graft probe as an “attempted coup” by the US-based Sunni religious leader Fethullah Gulen, he also covertly blamed the United States to be the mastermind of this plot against his government. He even raised the possibility of expelling Francis Ricciardone, the US ambassador to Turkey, soon after the scandal broke out.

A lot has happened since Obama listed Erdogan in 2012 as one of his top five close friends among world leaders. The White House readout of the Obama-Erdogan telephone conversation sounded as if the Obama administration was listing its disappointment with Erdogan one sentence after another. “The President affirmed the value he places on a strong, mutually respectful bilateral relationship with the Republic of Turkey and expressed his view that Turkey can demonstrate leadership in the world through positive engagement,” it read, allowing analysts to speculate as to why there was any need to openly spell out “positive engagement.”

Umit Ozdag, the head of 21st Century Turkey, an Ankara based think tank, told Al-Monitor, “At its core, the Justice and Development Party (AKP) has a very different ideological essence from the Western system. They gather in protest in front of the US Embassy, they provoke the civil war in Egypt or support the Salafi groups in Syria. It is to say, the Turkey-US relationship can be derailed anytime, despite whatever concession Erdogan may give to the US [for staying in power].”

The way the US-Turkey relationship is consumed in local politics, however, is far from positive. On Feb. 18, for example, Erdogan talked about the recently leaked audio recording of Gulen and an unknown individual who basically asked permission for framing the United States to be behind the illegally placed listening device found at the prime minister’s office, similar to the tapping into German Chancellor Angela Merkel’s communications by the United States. Like it or not, many in Ankara’s beltway see it as only fair that Erdogan questions whether the United States is behind the graft probe, as long as Gulen continues to stay in the United States when nothing legally or physically prevents him from returning to Turkey.

Moreover, Erdogan may find some odd support from even the opposition that questions the sincerity of the Gulenists. After all, Erdogan is right that Gulenists — initially with his help — have boosted their presence in key state institutions such as the judiciary and the security establishment. But for what exactly? The end goal remains mysterious as ever.

That aside, just like in their telephone conversation in August 2013, Obama and Erdogan talked about the issue of the danger of foreign extremists in Syria. “The President and Prime Minister agreed on the importance of close cooperation between our two countries to address the growing terrorist presence in Syria and on the shared interest in continuing efforts to advance a political solution to the Syria conflict,” the White House statement read. The AKP insiders speaking to Al-Monitor also express a deep belief that the United States must be behind the incident, where a secret mission of the Turkish intelligence service failed when a convoy of trucks was seized on Jan.1 near the border carrying weapons and ammunition to Syria — they claim that the prosecutor who ordered the search of these trucks must be a Gulenist.

The Feb. 19 White House statement continues: “The President and Prime Minister discussed the importance of encouraging Baghdad and Erbil to find common ground on energy issues and supporting the agreement they achieve. The President thanked the Prime Minister for his constructive role in the effort on Cyprus to renew negotiations for a settlement.” It added: “The President and Prime Minister spoke about the importance of quickly concluding the normalization agreement with Israel. The leaders also discussed the need for strong, sustainable, and balanced growth in the global economy, and the President noted the importance of sound policies rooted in the rule of law to reassure the financial markets, nurture a predictable investment environment, strengthen bilateral ties, and benefit the future of Turkey.”

On Cyprus, there may be some optimism for a permanent resolution of this conflict. However, signing the ultimate deal on this long-lasting issue is not as easy as those hopeful words sound. The political opposition already expresses doubts as to whether providing concessions on Cyprus is the price that Erdogan will be paying for staying in power, and the thought of such approach makes it unlikely that there really will be any deal on this issue. It may be, however, easier to mend the ties with Israel, but the political landscape also makes it only illusionary to expect any “quick” normalization.

It's good to remain hopeful and say positive things about cooperation and alignment between the United States and Turkey. But actions speak louder than words.