Obama Gets Erdogan On Board To 'Destination Geneva II'

In his Washington visit, Turkish Prime Minister Recep Tayyip Erdogan was given no choice but to ride US President Barack Obama’s bandwagon to Syria. 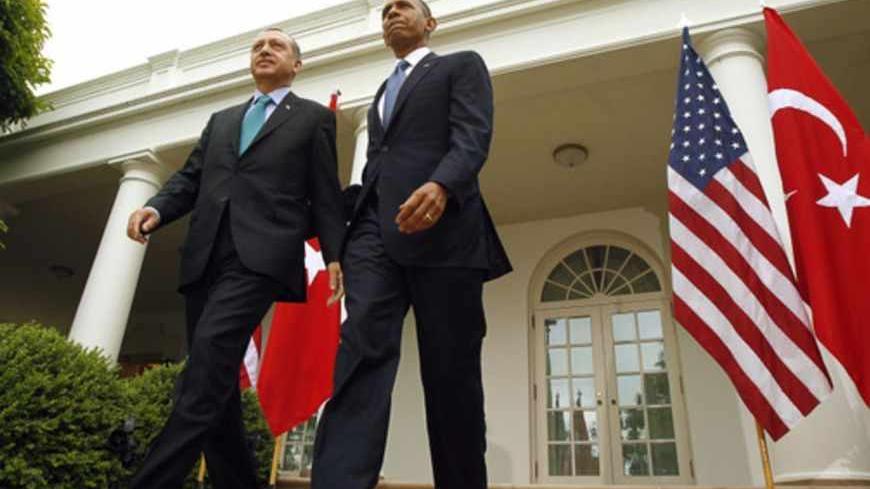 The media army, handpicked by Prime Minister Recep Tayyip Erdogan and taken to Washington, did its job well. Millions of TV viewers and newspaper readers in Turkey came under a massive image bombardment starting with the Obama-Erdogan meeting at the White House on May 16.

In fact, the assault had started before Erdogan reached Washington. For days, we read embellished reports about Blair House, right opposite the White House and reserved for the highest-level guests, to show how Erdogan was getting special attention.

Erdogan’s visit was long awaited. The two car bombs that went off at Reyhanli on May 11 had given the impression that violence in Syria had now been exported to Turkey and assured Syria the top slot on the Obama-Erdogan meeting agenda.

That Turkey and Erdogan had grievances against the United States for not doing all it could to support the Syrian opposition was well known, hence the expectation for Erdogan to press Obama for a more proactive Syria policy. Changing US policy gained new urgency after the Reyhanli bombs because the prolongation of Assad’s tenure is beginning to be a serious risk to Turkey’s stability.

Supported by image bombardment of an accommodating Turkish media targeting Turkish public opinion, the most important subject of Erdogan’s Washington visit was downplayed. Nobody could understand what Erdogan got from Obama in their White House meeting.

The joint news conference of the two leaders in the Rose Garden in the rain told us that it wasn’t Obama’s Syria policy that was changing, but Obama had indeed managed to get Erdogan get on board the train marked “Destination Geneva II” operated jointly by the United States and Russia.

The Turkish media accompanying Erdogan covered the Rose Garden press conference by headlining Obama’s words “sooner the better for Assad to leave” as if he had moved closer to Erdogan’s position. The emphasis was on the Obama-Erdogan accord on Syria but they couldn’t conceal the reality that it was Erdogan who had changed his position.

For Obama, the priority was Geneva II. Erdogan and his foreign minister, Ahmet Davutoglu, who correctly diagnosed the conference as a Russian maneuver to gain time for Assad had no other option but to reluctantly purchase tickets for the “Destination Geneva II” train.

The Americans pampered Erdogan enough to twist his arm without hurting and enabled him to showcase his Washington visit to the Turkish public as a victorious diplomatic fanfare. The meeting of delegations at the White House was unprecedentedly crowded with 1+13, that is in addition to Erdogan and Obama, there were 13 others on both sides. Americans accommodated the Turkish whim for this ludicrous number clearly with prospects of possible profits.

The White House meeting was followed by a lunch where Vice President Joe Biden and Secretary of State John Kerry took over as master of ceremonies for Erdogan by extolling him to the high heavens. The real working dinner was at the White House. It was on 1+2 format. In addition to Erdogan, there were the Foreign Minister Ahmet Davutoglu and Erdogan’s confidant, Hakan Fidan, the head of Turkey’s National Intelligence Organization, MIT. Obama’s team included Kerry and National Security Council Adviser Tom Donilon. Whatever was decided on Syria, it was at that dinner.

A political observer friend, commenting on the most lavish welcome ever given to a Turkish leader visiting Washington, said: “If the Americans are going so much out of their way to please Erdogan, there must be something behind it all. They must have received something important without giving anything in return.”

That was a correct diagnosis. Erdogan, with a stark reversal of his Syrian stance, boarded the train, jointly operated by the US and Russia and marked “’Destination Geneva II."

At the end of his Washington visit Erdogan continued to spin the Turkish public through Turkish media. He held a private briefing with some managing editors he had taken with him and answered their questions. To the question “Were there any concrete developments on Syria?” he replied:

“The most concrete was ‘Syria without Assad.’ If there is going to be a step after Geneva, it will be a process without Assad. There is no problem in reinforcing Syrian opposition.Up to now, Syria has fired 238 missiles against its people. These were spot firings. They have no strength on the ground. They display their power by tank, artillery and missile fire. There are indications of their use of chemical weapons called sarin. All these will be conveyed to international public opinion and isolate Assad. If Russia is saying it is not an attorney for Assad, then we have to see how long more it will stand by him. We will see. After this trip I am planning trips to Russia, Saudi Arabia and the region.”

It is obvious Erdogan was trying to have the Turkish public opinion support the validity of arguments he raised at the White House but couldn’t get accepted. That he felt a need to visit Russia and Saudi Arabia after Washington shows that he will continue to maintain his image of “high flier" about Syria.

We understand that he has no effective leverage on Russia. Russia’s unchanged position on Syria and its support for Assad has continued since the Putin-Erdogan meeting in Istanbul on Dec. 3. When Erdogan was in Washington, The New York Times printed a scoop titled “Russia Sends More Advanced Missiles to Aid Assad in Syria." The report by Michael Gordon and Eric Schmitt on May 16 said: “Unlike Scud and other longer-range surface-to-surface missiles that the Assad government has used against opposition forces, the Yakhonts antiship missile system provides the Syrian military a formidable weapon to counter any effort by international forces to reinforce Syrian opposition fighters by imposing a naval embargo, establishing a no-fly zone or carrying out limited airstrikes."

And Prime Minister Erdogan who went on his Washington visit giving the impression of being the United States' most important regional ally ended up not consolidating the United States-Turkey coordination against the Russia-Syrian duo but by being overtaken by a joint US-Russian initiative, a redux of the Cold War, and was left with no choice but to reconcile himself to being pampered by the US administration and riding Obama’s bandwagon to Syria.

That is a diminished status for a country and its leader aspiring to be treated as the uncontested regional power of the Middle East.