The legacy of racism toward Mizrahi Jews

The publication of the protocols of the riots in Wadi Salib, disclosing the racism of Israel’s founding generation toward the Mizrahi Jewish population, could have initiated a genuine debate. 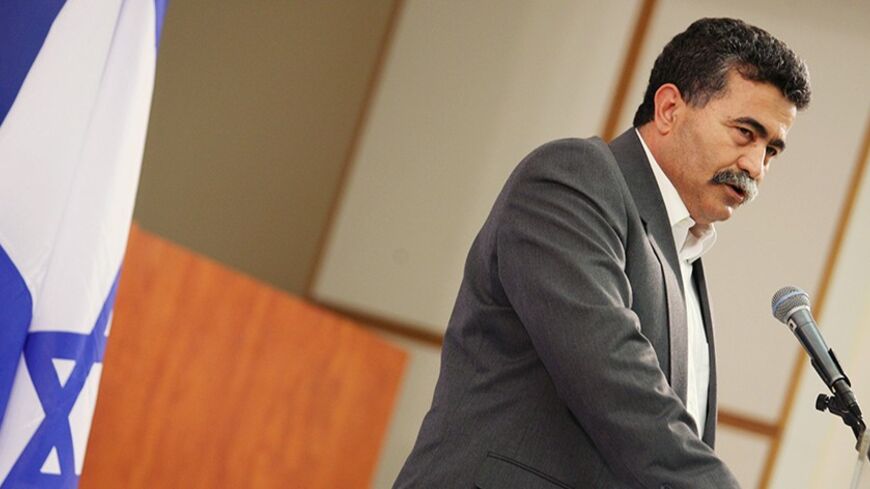 Israel's then-Defense Minister Amir Peretz delivers a speech during a ceremony at the Ministry of Defense in Tel Aviv, May 24, 2007. - REUTERS/Alon Ron

In November 2005, Shimon Peres lost the Labor chairmanship to Amir Peretz. A short time after his victory, Peretz triumphantly announced that ethnic tension in Israeli society had come to an end.

"This is the moment we bury the ethnic demon in Israel," Peretz proclaimed in his victory speech. However, the Moroccan-born Peretz discovered soon enough that numerous communities that had supported the Labor Party in the past as far back as its Mapai days (the Mapai was the dominant force in Israeli politics until its merger into the Israeli Labor Party in 1968) — from the big cities as well as the kibbutzim — abandoned Labor together with Peres to support Kadima.

Internal polls ordered by Peretz’s headquarters before the 2006 Knesset elections showed that about six mandates associated with what is commonly called the "white tribe" had stopped supporting the Labor Party. In their eyes, Peretz was a sectarian Mizrahi (Oriental) leader. Labor under Peretz garnered 19 mandates in the elections only because he succeeded in recruiting an alternate electorate from the cities in the periphery.

Later on, Peretz discovered that the same ethnic demon he had supposedly buried on the night of his victory at the primaries threatened to bury him under a landslide of racist stereotypes that reached their height during the Second Lebanon War when he served as defense minister. And when he did speak, afterward, about his disillusionment during those days and his disappointment at his lack of success in serving as a national leader, he did so briefly and quietly. Peretz justifiably did not want to become the latest Mizrahi crybaby of Israeli politics.

When claims of discrimination and social gaps come from a Mizrahi politician, they are usually met with suspicion and dismissed as whining. The consensus today in political circles is that the summer 2011 protests succeeded in attracting hundreds of thousands of Israelis because the young people leading the protests extracted the social justice struggle from the Mizrahi niche and turned it into a national nonpartisan one.

For this reason, I ascribe great importance to the Feb. 14 disclosure of the protocol of the Wadi Salib commission of inquiry in Haaretz. This protocol is of tremendous importance in understanding the high price paid by Mizrahi politicians for carrying the social justice banner — one they still pay today.

Fifty-five years after the eruption of riots in the Haifa neighborhood of Wadi Salib led by local leaders of Mizrahi origin, the protocols reveal how elite members of the state’s senior leadership at the time, mainly of European origin, viewed the events. Instead of the legitimate social justice struggle of a weak, downtrodden population, they saw in it the ethnic, sectarian and whining confrontation of an inferior, ungrateful population.

According to the protocol, Golda Meir, then a government minister, refused to be convinced that the motive for the riots was socioeconomic distress.

“What happened here was not on a social welfare background. You can kill me and I won’t accept that this was on a social welfare background,” she said. Then-Israeli President Yitzhak Ben Zvi said, “First came from Morocco the socially disadvantaged cases. The educated ones didn’t make aliya [immigration to Israel]; they moved to France or other countries.” Similar expressions were quoted by other ministers, statements that were also tinged with racism in the most basic meaning of the term. They illuminate the committee’s preposterous conclusions: that no institutional discrimination against Mizrahi Jews exists in Israel.

In a rare moment of transparency, the protocols clearly reveal the outlines of the governmental worldview toward the immigrants from Arab countries that saw the existential struggle of the immigrants as a rebellion of drunkards, illiterates and law-breakers that must be forcefully suppressed. These protocols provide a glimpse into a formative moment in the early years of the state in which the Mizrahi protests were translated by the Ashkenazi (Eastern European) leadership as an illegitimate, sectarian event. In this were effectively laid the foundations for the worldview that accompanies us to this very day.

This is the same worldview that led former Deputy Defense Minister Uri Orr in 1998 to say the following in an interview with Moroccan-born journalist Daniel Ben Simon, “The Moroccans are the biggest and most problematic of the ethnic groups. I’m saddened because these groups don’t have the curiosity to know what’s happening around them.” In this way, Orr, a Labor member, instantaneously destroyed his short political career, but the stereotype of a Mizrahi social justice leader as a "crybaby" is still alive and kicking.

Many decades have passed since the events of Wadi Salib, but the racist views held by Israel’s founding generation toward the Mizrahi population still turn the wheels of Israel’s political and social apparatuses. Mizrahi politicians tend to avoid talking about the problem because this will only entangle them in the "crybaby" trap, and they will emerge as losers. Thus the importance of these protocols cannot be overstated even if the disclosure did not, unfortunately, arouse the substantial public debate that was due. Such a debate could have initiated a courageous, genuine process of confronting the ethnic demon head-on.