The Ethnicity Card and Elections In Israel

The ultra-Orthodox Shas Party is stirring up the ethnic issue again in the Israeli election campaign, writes Mazal Mualem. 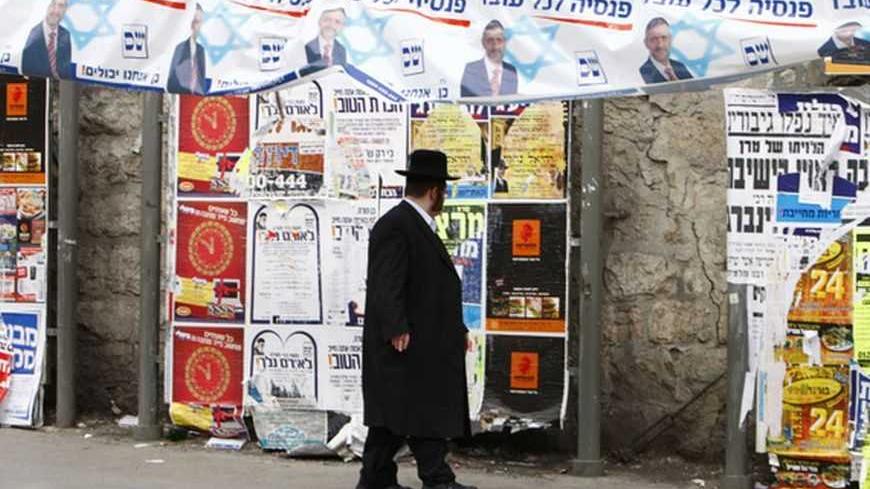 It's already become a permanent fixture in elections: The ethnic card is being played yet again. It appears to be unavoidable — at some point, there will always be someone who will pull that card from the deck and reawaken all of the gaps and rifts between Mizrahim (Jews of north-African and Middle-Eastern origin) and Ashkenazim (Jews of East European origin) to get voters to the polls and vote the right way.

The technique for creating an ethnic campaign is simple: First, choose a short and catchy slogan such as "recapturing the glory of the past." Then, try to evoke a little of the pain of discrimination felt by the Mizrahim, while tapping into the fury against the elite social groups, and finally, strengthen how closely they identify with those very feelings of discrimination down the generations. At the end of this process, they go cast their ballots.

The man who elevated the technique of the ethnic campaign to an art form was, of course, Menachem Begin, the former leader of the Likud who was elected prime minister of Israel in 1977. Although he was Polish by ancestry and in his mannerisms, Begin was the first to recognize the tremendous electoral potential of the sense of alienation felt by the Mizrahim. As he was also a gifted speaker — some would say a "gifted demagogue" — Begin’s speeches in development towns and town squares, the best-known of which was the so-called chach-chach (derogatory word for Mizrahim) speech against the “Ashkenazi” Labor Party, captivated masses of Mizrahim, who found a home with the Likud, a party that had its roots in Eastern European revisionism, as did most of its leaders.

A few years later, in the 1980s, the Shas (Sephardi Torah Guardians) party was formed. It was founded to counter the Haredi (ultra-Orthodox) Ashkenazi parties, which until that time were the only representation of Haredim in politics. The great success of Shas is its stability. The Mizrahi-Haredi party has been part of this political landscape for decades, with a hard core of Haredi and traditionalist Mizrahi voters.

It is, therefore, no wonder, that it was Shas that launched the ethnic campaign for the 2013 elections. The "brain" behind it is the party's No. 2 man, Aryeh Deri. Shas has recently found itself stuck in the polls, which forecast 11-12 seats, much like Shas has in the outgoing Knesset. Deri is convinced that if he can dust off and play the ethnic card, he will be able to move between two to four Mizrahi seats from the Likud to Shas.

Deri, we should add, already has one successful ethnic campaign under his belt. In the 1999 elections, when he was at the helm of Shas, the party scored its greatest victory: 17 seats, making it the third-largest party. Now he's seeking a similar win.

Returning to Shas after a lengthy hiatus of over a decade, during which he served a prison term for corruption, Deri is driven by tremendous motivation to be the magician once again — the man who knows how to hit the rawest nerves of the Mizrahim and make them believe that Shas is their home. He wants to leverage this electorate to retake the key position of influence he held on the political scene in the mid-1990s, and particularly in the second Rabin government, when he was known to have a close relationship with the late prime minister.

Deri has a creative mind and is daring. He immediately recognized that the union declared about two months ago between Avigdor Liberman's Yisrael Beiteinu (representing immigrants from the FSU) and the Likud could bring him the support of a large number of Mizrahi voters who would fear that Likud-Beiteinu was no longer their home.

And so it came to pass that last weekend, three weeks before the elections, Shas played the infamous ethnic card, and this time with the slogan: “Sepharadim [Mizrahim] arise.” It was accompanied by a range of provocative statements by the heads of Shas with Deri, as is his wont, astounding with his copywriting skills that brand and differentiate: "Likud-Beiteinu has become an arrogant and haughty party that represents Russians and whites. Shas is the true home for those who identify with the Likud," he said.

Even in set in the context of an aggressive election campaign, this statement was the ultimate in poor taste and primarily, racism. At Shas headquarters, Deri was sharply criticized and forced to apologize. However, at the same time, Shas continued to incite in the name of ethnic discrimination. As ordered by Deri, in recent days data has been collected showing underrepresentation of Mizrahim in the judicial system and politics, and the objective is to use the data as propaganda in the ethnic campaign.

Deri, who has a sense of humor, doesn't miss an opportunity to roll the Ashkenazi names of the heads of the political parties off the tip of his tongue: Benjamin Netanyahu, Avigdor Liberman, Shelly Yachimovich, Tzipi Livni, Yair Lapid and Naftali Bennett. It sounds funnier with a Mizrahi accent.

That said, the most recent polls do not predict, at least not now, great success for the party's ethnic campaign, and it is not breaking the 12-seats in the good polls.

However, it would be incorrect to assume that the power of ethnic voting in Israel is on the decline. In many ways, this type of voting is still one of the strong drivers in Israeli politics, but the discourse surrounding it is evasive and for the most part denied. Why? Because along with future campaigns of sectoral parties such as Shas, which plays the ethnic card openly, Mizrahi candidates from mainstream parties refrain from addressing the matter directly and openly. The main reason is that they are afraid to be seen as leveraging ethnic sentiments for their own benefit.

Why are they afraid? Because, it is important to realize that there are two sides to the ethnic campaign: it can bring you Mizrahi voters, but at the same time can alienate Ashkenazim.

The most common expression for this is the "white tribe." This phrase pops up frequently in coverage of Israeli politics, when referring to the electorate leaning to the left-center, most of whom are Ashkenazim, generally with mid to high socioeconomic status. This public consistently shies away from supporting Mizrahi candidates, even if they head the political party to which they belong.

Knesset Members Amir Peretz and Shaul Mofaz are good examples. The former was elected head of the Labor Party at the end of 2005. At that time, Labor was traditionally considered the "white tribe's party." Aside from Knesset member Binyamin Ben-Eliezer, all party heads until that time were of Ashkenazi descent. Peretz made history by defeating Shimon Peres, currently President of Israel. Within two months, Peres left the Labor Party and joined Ariel Sharon's Kadima. Seven seats from the "white tribe" left the Labor Party along with him. Peretz compensated for this by bringing in seven other seats from peripheral areas, most Mizrahi.

Note that Peretz never played the ethnic card the way Deri does, but his people did it for him very successfully. That was how he got Mizrahi votes without being perceived as a cry baby.

The second example is Shaul Mofaz. While Peretz, who emigrated from Morocco, bears some of the stereotypical characteristics of Mizrahim — his name, appearance (the moustache) and the traces of a Mizrahi accent that can still be heard — Mofaz would appear to lack those very hallmarks.

He was educated at the agricultural school in Nahalal (a moshav or village renowned for its notable residents, mostly from the “white tribe") and rose to the rank of chief of the general staff. His childhood, as a son to a family of immigrants from Iran that suffered financial hardships and found it difficult to acclimate to Israel, was not revealed until his appearance on the political scene. The consultants and strategists explained that in politics, his story was a real asset: You could be the first Mizrahi prime minister, you could be the Israeli Obama, they told him.

But Mofaz, who like Peretz refused to engage in a clear Mizrahi campaign, evidently won't be the "Israeli Obama." His collapse in the polls was due to serious political missteps, but also because he was abandoned by “white tribe” voters, who refused to view him as their representative, and fled to Tzipi Livni (The Movement) and Shelly Yachimovich (Labor).

In the case of Mofaz, he lost twice. In Israel at the beginning of 2013, there have already been Mizrahi chiefs of general staff, defense ministers and foreign ministers, but we're still waiting for the first Mizrahi prime minister.