Libyan civilians killed or injured during the NATO bombing campaign were excluded from government support for "martyrs" of the revolution that overthrew Moammar Gadhafi. 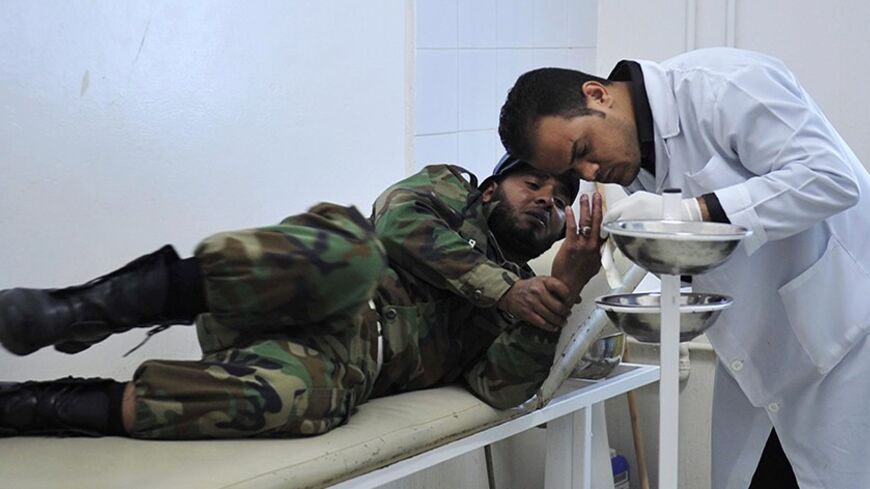 A medic treats a rebel wounded in a NATO airstrike at a hospital in Ajdabiyah, April 7, 2011. -

In a few days, Libya will commemorate the third anniversary of the uprising, supported by NATO airstrikes, that eventually toppled the regime of longtime leader Moammar Gadhafi.

Yet in Libya today, there are many people who will not be celebrating and will always feel the pain of loss when the anniversary comes by.

On March 17, 2011, the UN Security Council passed Resolution 1973, imposing a no-fly zone over Libya to protect “civilians” rising up against the Gadhafi regime. The resolution authorized all United Nations member states to use all means to implement it, effectively declaring war on Libya.

Two days later, NATO warplanes took to the skies over Libya to enforce the no-fly zone, which meant first neutralizing Libya’s air defenses through a series of air raids across the country. In total, NATO launched nearly 10,000 raids, dropping more than 7,000 laser-guided precision bombs, targeting what it called “legitimate” military targets. However, many of its raids and advanced weaponry went astray, killing dozens of civilians in at least five Libyan cities, particularly in western Libya.

In Sirte, 450 kilometers (280 miles) east of Tripoli, another NATO air raid killed a 15-month-old infant, three women and another three children. The family was at home on Sept. 25, 2011, when their house was struck.

In my hometown, Bani Walid, five members of the Jfara family were killed in their sleep when NATO fighter jets bombed two adjacent houses at dawn on Aug. 30, 2011. Among the dead were the mother and two young children.

In Surman, 70 kilometers (43 miles) west of Tripoli, 13 civilians were killed while celebrating a child's birthday at Maj. Gen. el-Khweldi el-Hamedi’s house, and more civilian victims were killed in Tripoli, Al-Gurdabiya, Zlitan and Brega east of Tripoli.

According to Human Rights Watch, Amnesty International and other rights organizations, NATO raids killed more than 70 civilians across Libya, although locals and witnesses claim the number is higher.

Journalists, UN experts and human rights groups who investigated the deaths at the sites confirmed not only the civilian deaths in all bombed locations but also lack of any possible military targets near the destroyed civilian buildings. In its March 2012 report, “Libya: The Forgotten Victims of NATO Airstrikes,” Amnesty International gave a graphic description of civilian causalities and destruction of residential buildings.

In May 2012, Human Rights Watch published another long report detailing “collateral damage,” as civilian causalities are known in military jargon, calling upon NATO to explain why those people had been killed and what the intended targets were. According to HRW’s report, it confronted NATO operational leaders in Naples, Italy, seeking explanations and evidence that the bombed sites were actually “legitimate” military targets. Of course, NATO never submitted any such evidences to substantiate its claims. It also never admitted responsibility under international humanitarian law, which requires that when civilians are killed during war, they must be not only recognized but financially compensated.

Victims' families seeking justice were not only confronted by NATO’s denial; even worse, their own government has not yet recognized the killing of their loved ones and the destruction of their homes. This, of course. could only make their quest for justice harder and far more complicated. All victims’ families would like to know why their homes were targeted and their loved ones were killed. Libya’s successive governments since October 2011 never publicly admitted the mere existence of civilian death as result of NATO airstrikes. Although encouraged by various rights groups, they never took up the matter with other states who took part in the war in Libya to find out why noncombatant civilians were killed.

To add insult to injury, the issue is a big taboo in the new Libya since NATO intervened in support of the rebels. Raising the subject in Libya today at any level could land you in trouble. The moment you do you are labeled as pro-Gadhafi, meaning you are against the “February revolution.” Such label is a very serious accusation for which you could pay dearly.

At the nongovernmental level victims’ families are not any luckier in their search for the truth. Although Libya today has hundreds of NGOs, enjoying generous support from  the government, not a single one of them that deals with the tragedy of NATO victims has been allowed to operate openly. The only voices seeking justice for NATO’s victims are their families and almost all coordination among them is done in complete secrecy and mostly handled by individuals outside Libya, for fear of reprisals from the various militias known as “Thwar,” who are only grateful to NATO.

The public has long since completely forgotten the matter thanks to Libya’s newfound free media, which hardly raise the matter, completely ignoring NATO’s role and the civilian casualties it caused. The General National Conference, or GNC, Libya’s transitional legislature, has never discussed the matter.

Deepening the agony even further is that the new Libya has a ministry called the Ministry of Martyrs and the Missing, caring for those who fought the Gadhafi regime, offering them medical care as well as a whole range of other benefits, including financial compensation. However, NATO victims are excluded from any benefit, whether it be simple psychological support, financial compensation or subsidized housing for those who lost their homes in the raids. According to an employee in the ministry, “NATO victims for us do not exist.”

It is shameful and socially dividing in the new Libya to have such a government department entirely devoted to serving one group of Libyans, however large it is, while excluding others.

This is a naked and open discrimination by the very “revolution” that raised many simple Libyans’ aspiration and expectations.

The new religious authority in the country, represented by the mufti, does not recognize NATO victims as “martyrs,” which meant depriving them of any public sympathy they might otherwise enjoy.

Millions of Libyans on both sides of the 2011 civil war have opposed NATO’s air campaign against their country; however, this should not make them automatically supporters of the former regime. Even among former rebels, on whose side NATO intervened, there are those who opposed such intervention for fear of the consequences.

If Libya will ever be a sovereign, united country as it used to be, it must face its tragedies, including those who have been killed by NATO. Why should its government bar its citizens from seeking justice as guaranteed to them by international law?