Is Libya's revolution anniversary cause for celebration?

It seems Libyans have nothing to celebrate on the eighth anniversary of its revolution. 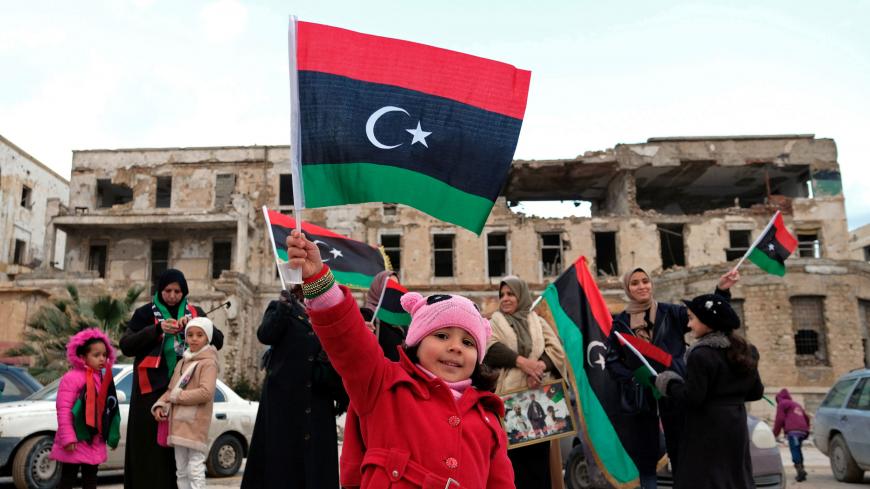 A child carries the Libyan flag during a celebration of the eighth anniversary of the revolution, Benghazi, Libya, Feb. 17, 2019. - REUTERS/Esam Omran Al-Fetori

If revolutions are judged by the progress they make and progressive changes they initiate in their societies, then the so-called Libyan revolution, named “February 17 Revolution,” has very little to show.

The revolt that started on Feb. 17, 2011, in Benghazi in eastern Libya was hailed as another episode of the Arab Spring that had already swept through Tunisia and Egypt. However, the "Libyan Spring" turned out to be a journey full of despair, bloodshed and insecurity, and peaked in civil war drawing in foreign military intervention. Alleging to protect Libyan civilians against Moammer Gadhafi’s government, NATO forces spearheaded military intervention, by bombing the country for seven months from March to October 2011, eventually toppling the regime.

Eight years on and the country is still groaning under the burden of divisions, lack of effective government, rampant militias, occasional small wars and spiraling corruption. Rebuilding anything is yet to start, and all in-progress development projects suspended in the wake of the violence in 2011 are still suspended.

To gauge the mood of fellow Libyans, I turned to Facebook with one question: What is the most important achievement of the revolution that is worth celebrating eight years on? I received over 100 comments representing all walks of life across the country and abroad. It is not a scientific survey, but it does reflect the opinions of ordinary people and gives a glimpse into their thinking and their hopes.

To date, there is no official record of casualties and economic costs caused by the revolution and the war that followed in the once rich, stable and safe North African country.

In 2011, Libya was going through a huge economic development program with ambitious plans to modernize the country, open up its economy, build thousands of subsidized housing units, curb corruption and improve the lives of its people. All that is frozen now.

After the Tunisian and Egyptian presidents gave up power in January and February 2011, respectively, “Gadhafi himself seemed un-immune,” Milad Said, a Tripoli-based university management lecturer [who declined to say which university] and a Gadhafi supporter, told Al-Monitor. “I am not celebrating because there is nothing to celebrate but everything to mourn — Feb. 17 is a disaster for all Libyans.”

He has a point. The civil war and NATO’s military intervention in support of the rebels destroyed much of the country. To date, nothing got rebuilt because the sporadic clashes and political disputes between different armed groups and lack of stability still hinders reconstruction.

Retired Gen. Khalifa Hifter’s forces launched Jan. 15 their incursion into southern Libya attempting to chase away criminal gangs, terror groups and Chadian rebels using the south as their base to fight their own government back home.

Militias in Tripoli, nominally supporting the United Nations-brokered government, still control the capital and surrounding areas. On Jan. 21, they were engaged in another round of fighting to counter another group, also claiming allegiance to the government in Tripoli, which was trying to take the capital.

Security is lacking and jihadist groups, such as the Islamic State (IS), are exploiting the situation. Between May and December 2018, IS launched three different attacks targeting three sensitive sites in Tripoli itself.

A talk show producer with a Jordan-based TV channel thinks there is one reason for celebration and that is “the revolution liberated us from the despicable Gadhafi regime. For me this is more than enough, despite the fact that we find ourself in a mess now,” she commented on my Facebook post.

Right after Gadhafi was killed by the rebels on Oct. 20, 2011, many Libyans took to the street to celebrate his death chanting “the dictator is dead.” And that very phrase became a catchphrase for pro-revolution Libyans to justify all that happened since, by saying, “It is great as long as the dictator is dead.”

Mohamed Farhat, an independent political analyst, sees one big benefit from the revolution that Libyans should be thankful for. He told Al-Monitor, “We are enjoying freedom of expression now — including yourself as an author. Under Gadhafi, it would be impossible for you to write in any critical way.”

But this not true, at least in my case. I won the Samir Kassir Award in June 2010, while living in Libya under Gadhafi, for an opinion article harshly criticizing corruption.

Ramadan Briki, former editor-in-chief of the local daily Quryna (from 2008 to 2011), told Al-Monitor, “No one was ever censored in my newspaper, even though it was a government paper. I personally defended many critical reports and analyses and published them.”

Briki refers to his late colleague, Abdulqader al-Hadairy, a famous Libyan columnist and editor-in-chief under Gadhafi who died Jan. 31. “Hadairy shot to fame because of a very critical piece he wrote against the security services as early as 1985,” he said. “He not only became famous, but kept his job for another decade at least.”

A female activist of women’s rights told Al-Monitor, “For women, the revolution did nothing. In fact we used to have lots of rights, but the revolution took away everything.”

Indeed, under Gadhafi, women were free to wear what they wanted, own a business and work in any kind of job including the army, police and the judiciary. Even Gadhafi’s personal security detail included several women. Now Libyan women lost all that and more.

At the time, Gadhafi kept Muslim clerks at bay with little say about what women could and couldn't do in Libya as long as it did not openly contradict Islamic teachings. Polygamy, for example, was banned unless under strict circumstances and, still, the first wife must consent to it in writing.

After Gadhafi was toppled, polygamy was reinstated and men can now marry four wives without any real restrictions. Women are encouraged to wear the hijab and sometimes the niqab. It is not legally enforced, but almost all religious sheikhs on the government payroll encourage it through prayer sermons and media outlets, including on radio and TV.

Many Libyans also think the revolution transformed Libya into an almost failed state without real sovereignty and unable to defend itself. Regional countries such as Egypt, the United Arab Emirates, Qatar and Turkey are supporting opposite sides in Libya, prolonging the conflict and increasingly making it a proxy war. At the same time, international powers such as France and Italy are competing over influence and interests in Libya.

Hussein Bengharsa, who runs a charity called Safe House in Bani Walid, southwest of Tripoli, helping illegal migrants, told Al-Monitor, “Since there is no real effective central government in charge, the country is unable to control the flow of migrants, because it cannot control its borders. This means Libya does not have full sovereignty over its territory.”

Dealing with an influx of migrants on a daily basis, Bengharsa believes an effective strong government controlling the country is essential to control the flow of people. For years, Libya has been a favorite transit country, even before the 2011 revolution. But under Gadhafi, it was a manageable crisis with fewer migrants than the influx seen after 2011. A pre-2011 stable Libya absorbed thousands of economic migrants who found jobs and stayed in the country.

Out of the 100 respondents who responded to my question on Facebook, I counted less than 10 individuals who think the anniversary of the revolution should be celebrated. It is this small minority who attended the celebratory concert in Tripoli on Feb. 17.

While no official figures are available as to how many people came out to celebrate, Tripoli’s large Martyrs' Square, which fits thousands of people, was half full on the revolution’s anniversary. Notably not a single government official was present. The celebrations were informal with less well-known singers performing.

Apart from Tripoli and Benghazi, the birthplace of the revolution, no glamorous celebrations were held. Social media users, particularly those on Facebook, were critical of the celebrations, since they were accompanied by a seven-hour blackout in parts of the capital.