Foreign Minister Avigdor Liberman considers registering thousands of his supporters in the Likud Party, which will enable him to take control of it on his way to the premier's seat. 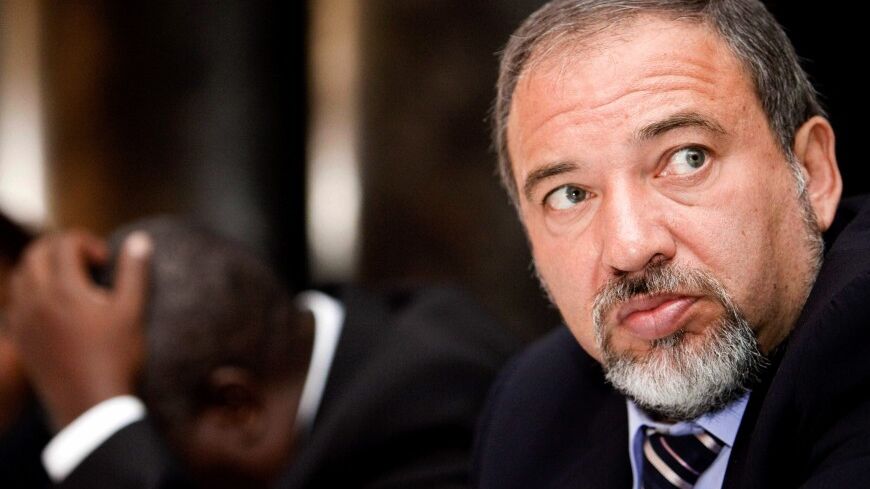 After the launch of Avigdor Liberman’s new 2014 persona, all we have left to do is find out what road the foreign minister will take to realize his dream of becoming the prime minister of Israel, to where he emigrated in 1978 from the Soviet Union at age 20. Liberman faces a simple dilemma: Either he returns to his independent Yisrael Beitenu Party to scrape up some 20 seats out of the 120-seat parliament — which is not an impossible feat — or he will dismantle his own party and join the Likud Party to seize control of the ruling party from within, thus earning a ready-made political platform.

Liberman joined the Likud ranks as soon as he arrived in Israel, serving as the party’s director-general when Prime Minister Benjamin Netanyahu took control of it in 1993. He still holds onto many important power bases in that party, among its constituents as well as in the party’s caucus. That said, Liberman faces fierce opposition inside the Likud from all those who consider his return as jeopardizing their own standing and future. Minister of the Interior Gideon Sa’ar, Defense Minister Moshe (Bogie) Ya’alon, Minister for Regional Development Silvan Shalom and maybe even Minister for Strategic Affairs Yuval Steinitz are hoping to succeed Netanyahu some day. There are also the various radical elements, chief among them Deputy Transportation Minister Tzipi Hotovely, Deputy Defense Minister Danny Danon, Coalition Chairman Yariv Levin and others who construe Liberman’s moderate political views and his surprising pragmatism to be a threat to them. The latter, combined with the settlers, who make up many of the Likud constituents, will see Liberman as a foreign element that should be prevented from making a “hostile takeover” of the party.

Before the 2013 elections and following a decision that rocked the political establishment, Netanyahu and Liberman called a news conference, announcing that the Likud and Yisrael Beitenu parties would run in a joint slate called “Likud Beitenu." Back then, Liberman predicted that the joint slate would garner as many as 45 seats (prior to the election they had 42 seats together; 27 for Likud and 15 for Liberman.) The foreign minister’s prophecy proved wrong. The joint party suffered a resounding defeat, raking in only 31 seats (thus posting a loss of 11 seats compared to what they had before.) Yet, that was the most successful abortive move in the history of Israel’s politics, since it awarded Netanyahu another term as prime minister. Had Netanyahu not joined forces with Liberman, he very well could have lost the elections. The rest is history.

For the past month and nearly under the radar, Liberman has been campaigning among his activists on the ground ahead of the decision he would be expected to make in early March. Two weeks ago, he visited the town of Katzrin in the Golan Heights, where all his activists in the north got together. At his request, he was presented with a carefully crafted and highly detailed plan as well as a list of 100 key activists. Each one of them pledged to sign up 400 Israelis to the Likud Party. The objective of this plan is to join the Likud and sign up on Liberman’s behalf an overwhelming number of 40,000 new members. This is a tall order that will tilt the balance of power within the Likud, making Liberman the strongest man in the party overnight.

Also that week, Liberman held a similar meeting with activists in the southern city of Ashdod. Two more meetings are scheduled to take place over the next few weeks, in Kiryat Motzkin in the north and Ashkelon in the south. At the end of this campaign, the party caucus will hold a special meeting on March 4, at which point Liberman will make his final decision. Most of his friends and associates believe that he should return to Yisrael Beitenu and break away from the Likud, partly because of the opposition he faces within the ruling party.

When all is said and done, the only person to make that decision will be Liberman himself. The plans that were presented to him indicate that he seriously considers storming the Likud Party. It seems that Liberman understands that the heyday of Yisrael Beitenu as a party for newly arrived Russian immigrants is gone. The massive wave of immigration from Russia has been integrated in the country. Those immigrants are more Israeli than they are Russian. They are not as inextricably linked to Liberman as they used to be. The only road to ascend to power must go through the Likud.

For his plan to storm the Likud to be successful, Liberman needs the cooperation of two figures: Netanyahu, as chairman of the Likud Party, and Transportation Minister Yisrael Katz, who serves as chairman of the party’s secretariat, which oversees the party’s logistical management. The Likud statute stipulates that you cannot elect or be elected in the movement before being a member for three years. Ostensibly, this regulation would neutralize Liberman’s assault operation. However, it does have a mitigating clause. If the chairman of the secretariat, with the consent of the movement’s chairman, agree to shorten this time frame — or in other words, if Liberman’s newly signed-up constituents as well as Liberman himself are exempted from accumulating this three-year wait period — the move will be considered kosher.

And this is where we get to the crux of the story, which is the recent political pact between Minister Yisrael Katz, one of the most forceful and important politicians in the Likud, and Liberman. The two have tied their fate together. They are seen together at many functions. It’s also important for Netanyahu to see Liberman coming back. In his current persona, Liberman backs Netanyahu in the diplomatic process and gives him a tailwind in running the party’s affairs. Netanyahu is petrified by the extremists, chief among them the people from Judea and Samaria, who have taken over the Likud. Liberman can solve the problem for him and get rid on his behalf of those radicals. It appears that the two have some sort of an understanding to the effect that Liberman will not run against Netanyahu in the next elections, which would take us to the 2021 elections. By then, anything can happen. Yisrael Katz is cementing his position as Netanyahu and Liberman’s wing man. This trio, Bibi (Netanyahu), Evet (Liberman) and Katz, will seize control of the Likud, send the radicals from Judea and Samaria back to their original size and curb the assault of the younger guard, by Gideon Sa’ar, for example.

That’s the plan. It has yet to be approved and the die has not been cast whether to proceed at full throttle. Fierce opposition is expected from other directions. It will probably get to the point where the opponents will contest the act in the movement’s court and later in the state courts. Incidentally, even if Liberman’s bid is blocked by top Likud members, he stands to win either way. He might be banished, but he will rake in the votes of those who are disappointed in the Likud, if and when. However the chips may fall, Liberman will have to make the final decision next month. Until then, he enjoys his new status.

Incidentally, those who are familiar with Liberman and follow his moves know that his “new” image isn’t new at all. What Liberman is saying now is what he also said in interviews he gave in 2003-04 and also in the book he wrote at the time, My Way. His plan for a land swap was published back in the day as well as his statements that he would be willing to evacuate his home in the settlement of Nokdim in exchange for true peace, and that the unity of the people of Israel is more important than more territories.

His warmth toward US Secretary of State John Kerry, and the artillery umbrella he has provided him with, merit another explanation. Liberman’s friends emphasize that for him almost everything is personal. Kerry treated Liberman with warmth and respect throughout his previous term, when Liberman was a pariah and a vilified foreign minister. Back then, Kerry was chairman of the Senate Foreign Relations Committee. He always welcomed Liberman with open arms and friendship. Liberman will forever remember Kerry's attitude, his associates say. He truly believes that Kerry is Israel’s friend, and that we will not a see a more honest broker or a better offer than his.