After a governmental vacuum that lasted 11 months, Lebanese parties have finally formed a government based on Sunni and Shiite groups providing a supervisory role to the other, with Christians serving as mediators. 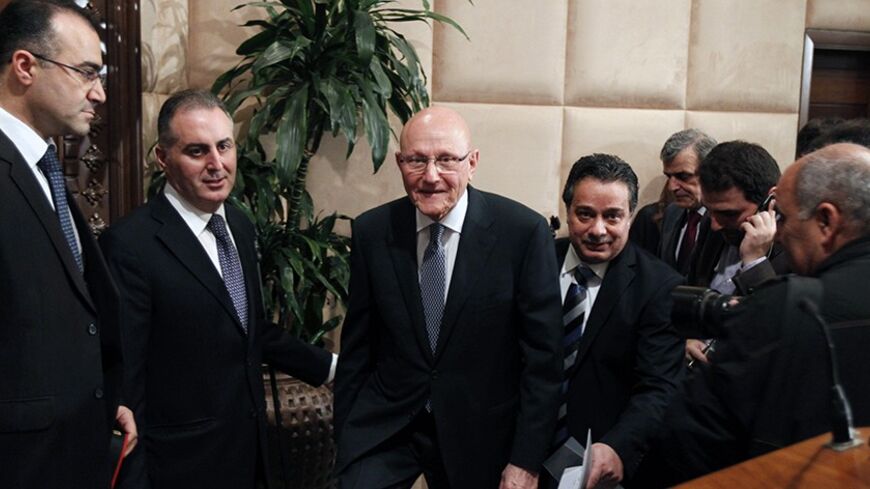 Nearly 11 months after the resignation of former Prime Minister Najib Mikati on March 22, 2013 and the ensuing leadership vacuum, the new Lebanese government was finally formed on Feb. 15. The cabinet is headed by Beirut member of parliament Tammam Salam, who belongs to the coalition of former Prime Minister Saad Hariri, and comprises 24 ministers carefully chosen to ensure balance between religions, sects, parties and ministerial portfolios in an extremely complicated formula specific to the Lebanese situation.

There are two important aspects about this government. First, it seems as though roles have been reversed for the three most prominent political and religious powers in the country. Second, there is a state of anticipation as this government heads into its first challenge: agreeing on a new ministerial statement from among three proposed choices and with a constitutional deadline of 30 days to win the trust of the Lebanese parliament, or the government will be considered resigned.

When it comes to the first matter — the reversal of the roles of political and religious powers — it is ironic to note that the government gave the largest Sunni group, headed by Saad Hariri, the Ministries of Interior and Defense. As two figures belonging to this group assumed the ministries, it is safe to say that the judiciary and security systems in Lebanon are now in the custody of the Sunni Hariri camp.

In parallel, the Shiites assumed the financial decision-making roles, as a minister affiliated with parliament speaker Nabih Berri was assigned minister of finance. This position wields an executive authority that equals in importance that of prominent institutions in the country. Therefore, the minister of finance has veto power over the Lebanese government’s work. Also, he supervises the work of all ministries, each separately, since all their detailed financial expenditures are subject to the approval of the Finance Ministry and the signature of the relevant minister.

To a large extent, Christians monopolized the gates of Lebanon to the outside world. The Ministries of Foreign Affairs and Energy were granted to two men who belong to Christian leader Michel Aoun’s coalition, knowing that it is the first time since April 2003 that a Christian has assumed the Ministry of Foreign Affairs. The Ministry of Energy has become one of the most important channels of foreign relations in Lebanon after the discovery of gas and oil in the eastern basin of the Mediterranean. It seems that the major powers of the industrialized world are highly interested in this wealth and are following up on the developments with and through the Lebanese Ministry of Energy.

Thus the exchange of roles between the three sects was made. Sunnis, especially within the Hariri camp, had grown accustomed over more than 20 years to governing the financial, developmental and investment affairs in the successive Lebanese governments. They enjoyed a proportional weight at the level of finance and investments in the country, be it directly or through the pro-Hariri Gulf investments.

The Shiites, however, particularly Hezbollah, were in charge of the security and judiciary situation in light of the party’s confrontation with Israel on its borders and its fight against spying inside the country. Christians were left outside the equation of power distribution. As such, it seems that the three prominent sects chose not so much to exchange roles as to supervise on the ministerial level the societal activity of the other. Each sect has chosen to be the governmental “counterauthority” to the other’s practical and actual authority. The Sunni Hariri camp is now supervising the work of Shiites in terms of security and judiciary and is creating a balance of authority through the Ministries of Interior and Justice. All the while, the Shiite camp is supervising the work of the Sunni group in terms of finance, budgets and investment, creating a shadow authority over the Sunnis through the Ministry of Finance. Both Sunnis and Shiites agreed on choosing the Christians as a third party to communicate with the outside world and the international community as an impartial mediator between them.

The second prominent issue that remains is whether the government will succeed in agreeing on a ministerial statement. How will the contradictory components of this government agree on points of contention, namely Hezbollah’s weapons, the Syrian crisis and the Special Tribunal for Lebanon? How will the government ensure winning the parliament's trust through its ministerial statement, so as not to be considered resigned within the period of 30 days? These questions deserve a detailed study.