A proliferation of political posters, especially of Iraqi Prime Minister Nouri al-Maliki, as Iraq gears up for elections, brings back memories from Saddam Hussein's era. 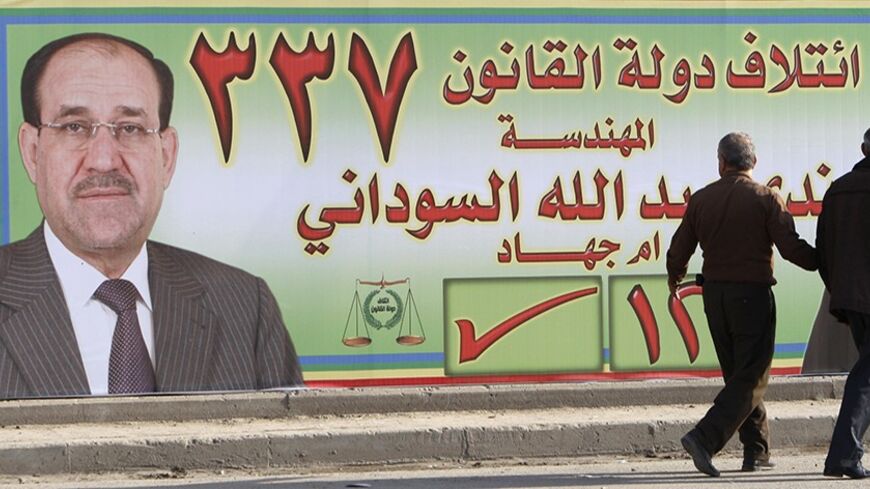 Prominent Dawa Party leader Hassan Sinead opined that the spread of posters depicting Iraqi Prime Minister Nouri al-Maliki in streets, at checkpoints as well as in official and military institutions was “damaging to him [Maliki],” further noting that the culture of plastering photographs was “passe.”

Sinead's statement to the official Iraqi Media Network on Feb. 4 was vague and ambiguous, as it tried to evade identifying the phenomenon by name. By law, it is illegal to affix pictures of the prime minister inside official institutions, and plastering photos of political leaders is a bygone culture with "dictatorial roots" — an allusion that this leader, who possesses both a cultural and literary background, tried to avoid making.

It was fortunate that Sinead also avoided blaming the government for the phenomenon of spreading its leader’s photographs almost everywhere for the past few years. Moreover, he did not blame “fans” and “supporters,” who enjoy spreading large posters of Maliki in squares, government and military offices, checkpoints or even their own bedrooms.

Iraqis remember well that during his reign, former Iraqi President Saddam Hussein — in the rare instances when he talked with the foreign press about the spread of his likeness in pictures and statues — used to say that he was not responsible for them, and that the loving people were responsible for their dissemination.

The main issue is that Maliki is not the only one whose photographs adorn Iraqi streets and squares. Religious leaders have also not truly addressed the issue of removing their own posters, which have spread everywhere for more than 10 years, despite some of them stating that they stood against the dissemination of such posters.

In conjunction with the ongoing battles in Anbar and the looming elections, Maliki’s supporters have disseminated a plethora of new large format posters of himself leading groups of people supposed to represent the various segments of Iraqi society, along with grandiose slogans about the extermination of terrorism.

As electoral media campaigns have not officially and legally started, these actions all fall within the scope of premature electoral promotional campaigns.

One could talk about a culture that is still engrained among some in the Iraqi public as well as in political and governmental circles, who view the head of the government not as the highest ranking appointed official but as a “leader,” “hero” and sometimes “extraordinary.” Therefore, the spread of large posters and statues are a kind of consecration and manifestation of this culture on the ground.

We hear, from people close to religious leaders whose posters adorn the streets, justification revolving around the nature of “religious sanctification,” leading to this phenomenon. Yet, we refrain from commenting when we see posters plastered in Iraqi streets glorifying religious leaders who are not even Iraqi, for fear that our comment be judged a great crime, similar to the “crime” perpetrated by a Baghdad newspaper that “was implicated” on Feb. 10 of publishing a caricature portrait of Iranian Supreme Leader Ayatollah Ali Khamenei, as part of an article discussing the history of Iran’s Islamic Revolution. This led to the holding of dozens of demonstrations, a bomb attack on the newspaper’s offices and threats against the cartoonist who drew the portrait.

The question that no one dares ask is the following: “Does the Iraqi state possess the authority required to remove the large posters and photos that adorn the squares, invade the streets and are regularly renewed and maintained?”

The answer is “No.” For the state does not have the authority to remove even one single poster, lest it falls victim to the same types of attacks suffered by the Baghdad newspaper.

Paradoxically, when you ask people with close ties to the government about the insistence that prevails in spreading Maliki’s posters everywhere, they refer you to the posters depicting religious leaders and transform your question into an accusation: “Why should Maliki be prevented from putting up his posters, while the posters of clerics fill the streets?”

The main issue revolves around the fact that the government is responsible for dealing with any illegal phenomenon. The people may implicitly pardon its inability — engendered by its limited capacities — to combat the spread of social tensions resulting from the chaotic spread of posters portraying religious leaders, despite the fact that doing so is its duty. But no one can forgive the government for participating in this festival of posters; all in the name of fair competition.