As Iraq prepares for parliamentary elections at the end of this month, residents have complained about the excess of electoral posters, and some parties are accused of using government resources in their campaigns. 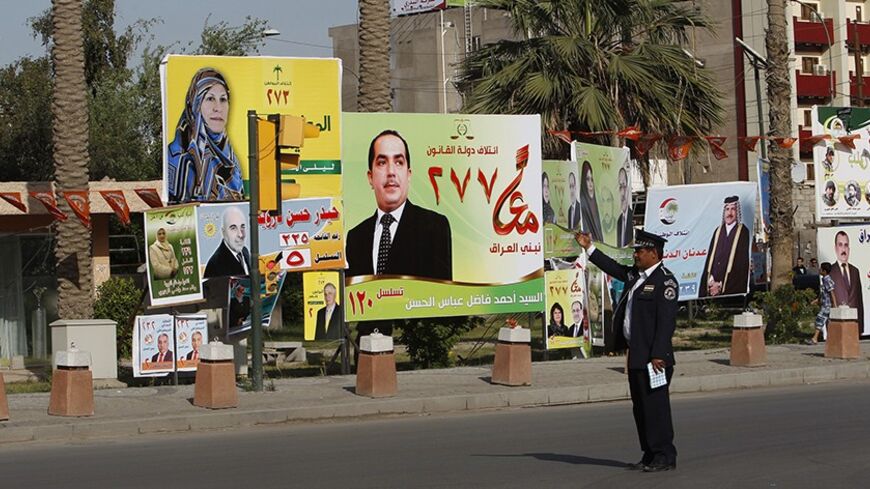 Baghdad residents recently woke up to find their neighborhoods filled with electoral ads for parliamentary candidates in the elections set to take place on April 30. Those ads, which vary in size, dominate public squares, parks, electricity poles and benches at bus stops. This has infuriated some residents who claim that the ads have defaced the Iraqi capital.

In central Baghdad’s Karada district, posters covered the square adorned with the magic lantern statue by the well-known sculptor Mohammed Ghani Hikmat. While in Liberation Square, which overlooks several ministries, the candidates not only displayed their pictures but also put up banners along the fence showing their photos and biographies.

The electoral campaigns of parliamentary candidates were launched on April 1. Some candidates put up their posters on March 31, ahead of the political blocs, to grab the visible spots.

The Independent Higher Electoral Commission bars candidates from using government and security departments, houses of worship, schools or public property to promote themselves. It also bars ads near polling stations and security checkpoints, but the candidates have not abided by these rules.

The election commission has mobile teams monitoring violations and has vowed to impose stiff penalties on violators.

Hakim Abdul Zahra, the director of media relations in Baghdad’s Secretariat, the department responsible for 14 municipalities in the capital, said, "The secretariat of Baghdad has formed committees to monitor violations and inform the Electoral Commission, whose duty is to warn and punish violators.” In an interview with Al-Monitor, he added, “Other parties affiliated with the commission work in the same context.”

Abdul Zahra indicated that the secretariat has spotted “major irregularities, especially in parks and medians in the capital. … The process of posting electoral ads has damaged plants and sprinkler systems, and [we] consider that damaging the infrastructure. … We will impose strict penalties on violators.”

Amir Lafta, a contract worker, told Al-Monitor, “The posters have tarnished Baghdad, and there are too many of them. … The officials already provide us with poor services in the capital, and they are now defacing [the city] with their posters.”

There is an undeclared war among the political blocs, as [some candidates] tear down their opponents’ posters in some areas. Moreover, there are claims that some blocs have hired youth to tear down posters and disfigure images.