One resident described Baghdad as a "sad city," where checkpoints are manned by Shiite militias and no one expects a bright future. 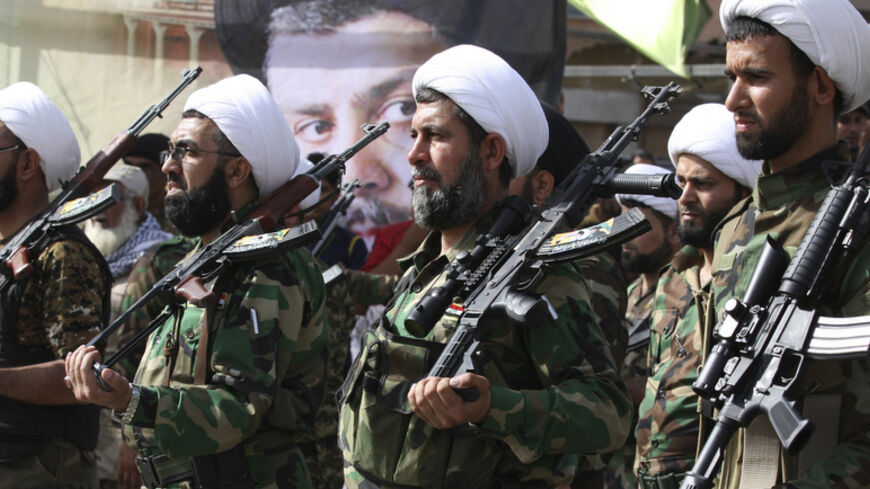 BAGHDAD — The city of Baghdad was once the Rome of the Islamic world, possessing a beauty that did not deteriorate with age. Now, policymakers are once again observing the city — which has not abandoned its reputation as one of the most dangerous in the world — in an attempt to foresee the future of the Middle East.

At the famous Baghdad airport, memories take one back to the spring of 2003. Here, the fall of Iraqi dictator Saddam Hussein began. Today at the airport, rumors are spread daily by activists opposed to Prime Minister Nouri al-Maliki's government. They say Maliki's government has fallen in a bid to convince the public that Maliki is vulnerable and about to be ousted.

Nothing signifies to the visitor that the US Army was once here. At the first checkpoint, several Iraqi soldiers, some not in uniform, stop and search passing cars as part of security measures to prevent bomb attacks. The checkpoint displays a banner reading, "Ya Hussein," or "Oh Hussein."

Hussein is the third imam of the Shiite Muslims, the sect to which Maliki belongs. It's a sign, too, that might hint to Shiite passersby that this country has been given an identity that might not be acceptable to all its people. As a Shiite Muslim myself, I felt this wasn't the right first impression for a nation to give, especially one that is in the midst of bloody sectarian strife in which thousands of innocents have been killed for their beliefs.

A decade of wars and unrest covers the Iraqi capital with sorrow. This June, sectarian violence in the form of bombings and field executions claimed the lives of 2,852 people, making the death toll of 2014 almost 8,000.

"It's a sad city," said my friend Abdallah, who drove me to my lodgings. "I want to leave, and so many others wish [to leave]. It's not a place to raise children or to think about ambitions."

Abdallah, a journalist in his mid-30s, believes that this latest crisis, which emerged after the Islamic State of Iraq and al-Sham (ISIS) invaded the city of Mosul on June 11, won't end anytime soon.

"Sunnis don't really care what the consequences are. All they want is to get back part of the power they lost after the toppling of Saddam. They feel oppressed because they can't decide anymore, and because the governments that have ruled this country since the US invasion and till this moment dealt immaturely with power," he said.

Despite security threats, several shops and cafes on our route were still open at 9 p.m. "Aren't they afraid?" I asked him. "Life has to continue. They know anything might happen, especially these days, but many don't care anymore. This new generation in Baghdad is defying reality. They want to live their life to the fullest they can because they feel the second day might not come."

Checkpoints are everywhere in Baghdad, in the evening and in the morning. Security measures are being beefed up, and as a result there are long lines of cars. Soldiers equipped with bomb detection devices stand on the sides of the streets as some cars are asked to undergo further searches.

It was 10 a.m. and I was with a taxi driver, Mohammed, a 29-year-old father of two. "I went to the army six years ago. I was a cadet. If I stayed, I would be an officer by now, but my family asked me to leave. They didn't want me to get killed," he said. "Many think of leaving, but I prefer to stay here near my family and in my neighborhood. There's no feeling as living alone in the cold weather in Europe or Canada."

Almost more prevalent than the many checkpoints are banners of tribes and families vowing to ISIS fight alongside the government. These are in response to the call by a representative of Ayatollah Ali al-Sistani, the highest-ranking Shiite cleric in Iraq, during the June 13 Friday prayers, for all capable men to fight ISIS and defend the shrines of the grandsons of the Prophet Muhammad. Large posters of fighters killed in Syria can also be seen. Some of the men are pictured in groups, others individually, along with the names of their groups and the leaders to whom they are loyal.

Al-Fardous Square, the historic site where the statue of Saddam was uprooted, has been left neglected, along with streets and markets in the heart of the city. Electricity comes and goes. "No one cares for our life. They all look for power," said Ali, a shop owner on Al-Rashid Street. "We aren't a priority — we weren't before and we aren't today. Yet, we still hope for a better Iraq."

"From the 1970s to this moment, everything is deteriorating," said Abu Yasser, who owns a library on the famous Al-Mutannabi Street. "I've been working here since 1970. I witnessed the reign of Baath, the US invasion and today's government. This country needs security and less sectarianism." Abu Yasser refused to reveal his sect, as he went through his collection of Iraqi leaders' photos since King Ghazi.

"I'm an Iraqi from Baghdad. I don't really care who's Shiite and who is Sunni. We, the indigenous Baghdadis, agreed for years that God is up in the sky, but those coming from other cities, from north and south, called God to the streets, and that's why they are fighting today."

To the northwest of the capital, the shrine of Imam Kadhim and his grandson Imam Jawad, the seventh and ninth Shiite imams, is a historic religious monument that attracts many people. Posters of Muqtada al-Sadr, his father and other members of the family surround the place. A nearby parade by members of the Mahdi Army takes place, with dozens of fighters chanting in support of their leader Muqtada.

Security forces stood by and watched the parade with the rest of the people.

One doesn't need to hear a bomb blast to know that explosions happen in Baghdad. The same goes for skirmishes in the outskirts of the capital. There's always a reason for concern here in Baghdad. Death is everywhere. It's only a matter of luck, of being in the wrong place at the wrong time, to secure one's demise.