There are indications that Iraqi Prime Minister Nouri al-Maliki will run for a third term despite criticism and opposition from various political parties. 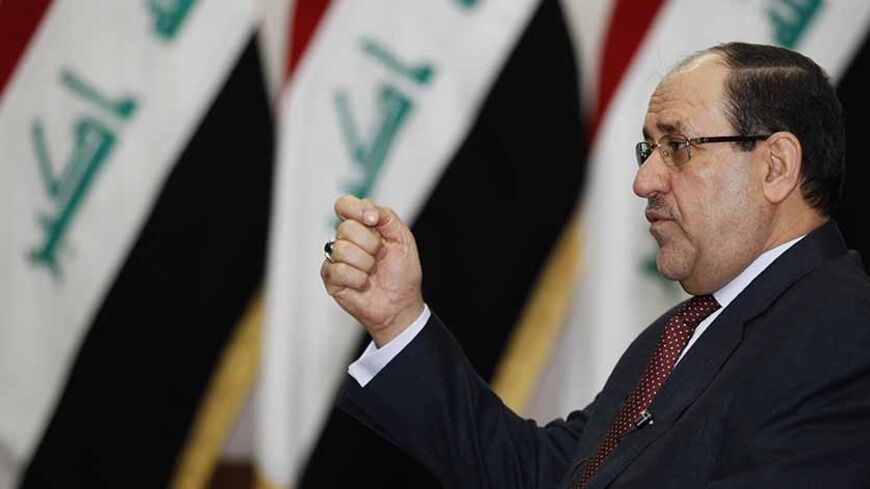 The State of Law Coalition, led by Prime Minister Nouri al-Maliki, has not put forward a new candidate for the premiership. The coalition instead hopes to see Maliki in the post for a renewed third term, but this scenario is rejected by the majority of the political coalitions planning to participate in parliamentary elections scheduled for April 30.

Members of the State of Law Coalition believe that Maliki, prime minister since 2006, has proven himself to be competent, arguing that he is the best and most-experienced candidate for the position. Maliki's rivals, however, contend that presenting him again as a candidate threatens the democratic process.

One State of Law Coalition member told Al-Monitor, “Nominating Maliki for a third term is undisputed. Maliki is gearing up to remain in office, and many members [of the coalition] are encouraging him to hold on to a third mandate.” Speaking on condition of anonymity, he reiterated, “The coalition did not discuss a replacement for Maliki. This issue was never even brought up.”

In January 2013, the parliament had voted in favor of a draft law to limit the prime minister, president and parliamentary speaker to a maximum of two terms. The Federal Supreme Court, however, overturned the law days after its passage.

Shwan Mohammad Taha, a parliamentarian for the Kurdistan Alliance, argued, “During Maliki’s two terms, and especially recently, Iraq has witnessed a setback in the democratic system.” He declared to Al-Monitor, “Maliki has tightened his grip on independent bodies in Iraq, and he is targeting all the political forces.”

Taha, who seemed dissatisfied with Iraq's governance under Maliki, prefers to leave the issue of renewing the current prime minister's mandate to the National Iraqi Alliance (NIA), which consists of the most prominent Shiite parties. He noted, “The Kurdistan Alliance is waiting for the NIA to name a candidate for the premiership following the elections, and it better choose well.”

Since Maliki began his second term in 2010, the government has faced ongoing crises, and the Ministries of Interior and Defense have been without ministers to lead them. Maliki has consistently rejected the candidates nominated by other political forces. In addition, the relationship between the federal government and the Kurdistan Regional Government continues to be contentious, and Iraqis are still being subjected to upsurges in violence.

According to Mathhar al-Janabi, a parliamentarian for the Iraqiya List, “Disputes within the NIA make it unlikely that Maliki will be named for a third term.” He added, however, “No one knows what will happen after the elections.”

Janabi pointed out to Al-Monitor, “Maliki remaining in his post for a third term is legal, after the Federal Supreme Court overturned the draft law limiting the terms of the prime minister, president and parliament speaker.” He concluded, “It is for the NIA alone to decide. Other political forces have no say whatsoever in this issue.”