Iraq’s battle against extremists spreads outside of Anbar

Although the Iraqi government launched a military operation in Anbar in December 2013 aimed at eradicating terrorism, it seems the protracted clashes have resulted in terrorist groups expanding their scope to other provinces. 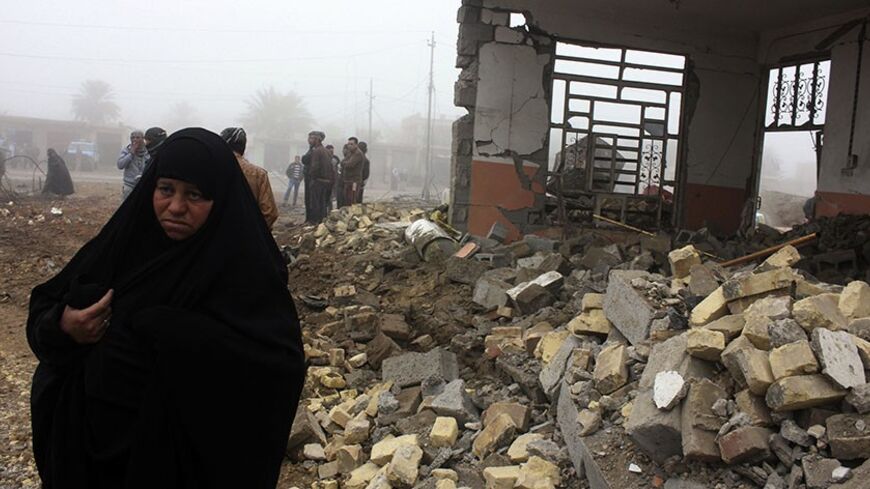 A woman walks past the site of a bomb attack in Balad Ruz, in Diyala province, Jan. 3, 2014. - REUTERS/Mohammed Adnan

The military operation that was launched by the Iraqi army against the Islamic State of Iraq and al-Sham (ISIS) in the western Anbar province in December 2013 is still ongoing, without either side making notable progress. However, ISIS’ scope of operations has widened to include other provinces such as Diyala, Salahuddin and Ninevah. This has forced the army to fight new battles in different areas.

Reports circulated that ISIS fighters have been infiltrating already troubled Sunni areas along with the displaced, which caused the scope of military operations to expand amid fears that the army will not be able to fight on all fronts.

Anbar, which lies 110 kilometers (68 miles) to the west of the capital, Baghdad, has been witnessing a massive military operation involving military equipment and attack helicopters as well as militants affiliated with tribes. The operations have extended to the border with Syria and led to the death of several soldiers and ISIS fighters.

Security forces in Diyala announced the launch of a military operation known as the “Revenge for Martyr Farouk” on Feb. 22, to track down ISIS remnants.

According to Mazhar al-Jenabi, a member of the Iraqi parliament’s Security and Defense Committee, “The army is not only fighting in Anbar — half of Iraq is rife with armed conflict now.”

“The security forces do not possess the military capabilities to wage wars on multiple fronts, as they are not well-prepared in terms of military training and arming, among other qualifications,” he added.

Moreover, Jenabi told Al-Monitor, “The emergence of terrorist groups in Anbar is further proof of the weakness of the security forces, especially Iraq’s border guards.” He also stressed, “The government has failed to manage the security issue.”

“What is happening in Anbar, which involves the bombing and killing of civilians, will pave the way for the emergence of popular fronts fighting against the governmental forces. The affected citizens will be the first to [join in on this fight],” Jenabi added.

Iraqi political blocs fear that the parliamentary elections scheduled to take place on April 30 will be postponed given the ongoing military actions. Jenabi expressed hope that “the situation would change in the coming days, so that it would be ready for the elections.”

For his part, Abbas al-Bayati, a member of parliament for the State of Law Coalition, said that “the army is not fighting on many fronts.” He told Al-Monitor that currently the only front is in “the western provinces and Fallujah.”

Bayati, who is also a member of the parliamentary Security and Defense Committee, added, “The terrorist operations in the provinces of Salahuddin, Diyala and Ninevah are nothing but a desperate attempt to alleviate the pressure on ISIS in Anbar.”

“The Iraqi army is in control of the land. The battle against terrorism will not be over with the end of the events in Fallujah, it will last longer,” he added.