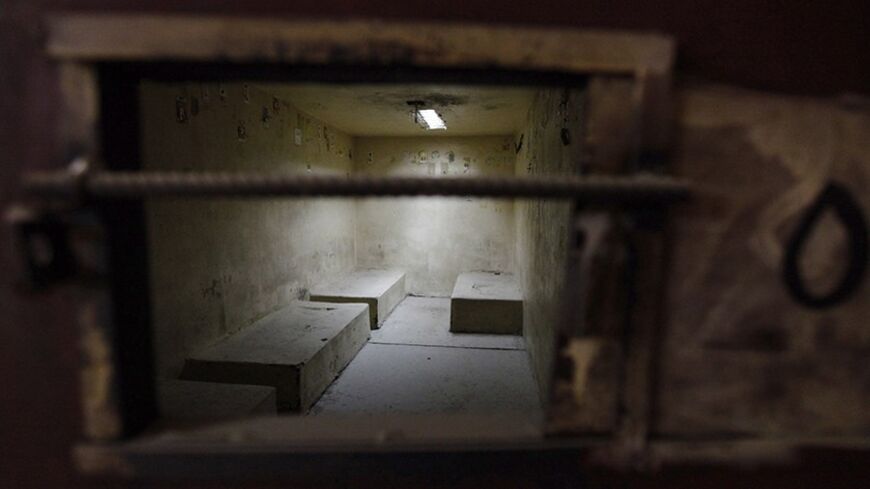 An empty cell is seen during a media tour arranged by the Iraqi authorities at a prison, known as Camp Honor, Baghdad, May 17, 2012. - REUTERS/Mohammed Ameen

Though Iraq has a human rights ministry, a special parliamentary committee for human rights and dozens of organizations that monitor the country's human rights situation, the practical results of these efforts are pitiful. Iraq still ranks very high among global human rights violators in areas such as torture in prisons, freedom of expression and journalist safety.

A separate HRW report, released Feb. 6, documented cases of abuse against Iraqi women — both Shiite and Sunni — during detention. The report revealed that thousands of Iraqi women have been arrested and detained illegally, and many have suffered torture and rape. The report concluded that corruption was rampant in the Iraqi judiciary, for a number of convictions based on confessions under duress have been recorded. Moreover, the documents demonstrate that international laws and conventions are not followed in Iraqi courts.

Surprisingly, Iraqi officials accused HRW of relying on false and biased information, even though they referred to HRW reports when Saddam Hussein was in power and they were in opposition to the regime.

In the latest developments on such matters, Iraq's Court of Publishing and Media issued two arrest warrants in early February 2014: the first against Judge Munir Haddad, who approved the death sentence of Saddam Hussein; and the second against Iraqi journalist Sarmad al-Tai, a known critic of the government’s political and economic performance.

The warrants charged them with “defaming” Iraqi Prime Minister Nouri al-Maliki. In the instance of Tai, it was the first time the defamation charge has been used since 2003. Tai was even charged based on laws issued under the former regime.

Maliki’s media adviser, Ali al-Moussawi, defended the warrants, saying, “The prime minister is an Iraqi citizen, and like anyone he may defend himself through legal and judicial means. … That would strengthen the role of law and the judiciary because everyone is subject to them.”

In another example showing the lack of serious political will to respect human rights, the formation of the Independent Commission for Human Rights in Iraq had been repeatedly delayed for many years. Law No. 53 of 2008 binded the Iraqi government to form this commission, which is not under government control. The commission was finally formed under difficult and unwelcoming circumstances.

Golo Sinjari, a staffer with the Independent Commission for Human Rights in Iraq, told Al-Monitor that the Commission has prepared its first report on human rights in Iraq and will soon submit it to parliament. The report details 12 cases of human rights violations perpetrated by the Iraqi government and other agencies.

Regarding the problems faced by the Commission in preparing its first report, Sinjari said government institutions were uncooperative and hindered the work of the Commission's representatives. As an example, he pointed to Commission’s legal right to visit prisons and detention centers without prior notice and without the need for government approval. But Iraqi Justice Minister Hassan al-Shammari refused a request made by the Commission and asked the Commission's staffers to wait for the ministry’s approval.

Regarding whether human rights violations targeted any specific sect, Sinjari said that the violations were committed against individuals of different Iraqi sects and ethnicities.

Sinjari said that Commission's findings were distressing, and that there was a great deficiency in Iraq's legislative and executive spheres, including a significant lack of laws respecting human rights and other laws that legitimized human rights violations. Though such laws are remnants of the era of the former regime, they are still in effect; no one is making an effort to reform them and there are no guarantees that government bodies enforce the laws.

Finally, despite the many human rights monitoring centers in Iraq, there is no mechanism to promote human rights on the ground, since there’s no serious will to do so on the part of the political administration or the ruling coalition. In addition, the major world powers are not interested in pressuring the Iraqi government to improve its performance in this area.