A new report by Human Rights Watch has criticized the government in Kurdistan for what it calls “serious violations” of freedom of speech, as a draft law would make it illegal for journalists to insult politicians, reports Abdel Hamid Zebari. 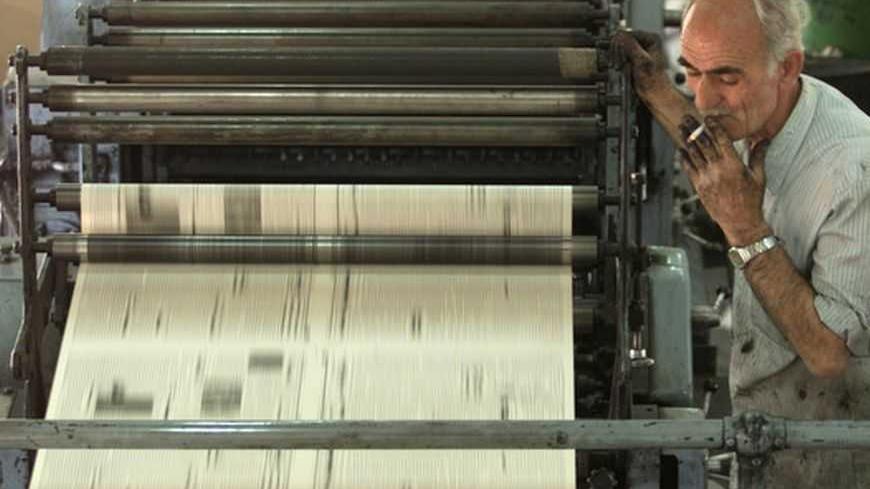 A pressman keeps watch on the print run of the first Baghdad edition of the Patriotic Union of Kurdistan's newspaper April 22, 2003. - REUTERS

In its most recent report, Human Rights Watch (HRW) demanded that the Kurdistan Regional Government (KRG) stop arbitrarily detaining journalists, activists and political opposition figures. It also called for an end to the prosecution of journalists on charges of insulting or defaming public figures, and demanded that the KRG not restrict press freedoms.

HRW issued a report this February entitled "Iraqi Kurdistan: Free Speech Under Attack," which discusses the arbitrary detention and prosecution of journalists and others for criticizing the authorities in the region.

The report also noted that officials from the ministries of justice and religious affairs in the KRG were apparently attempting a flagrant violation of the rule of law, and wanted to impose a bill that criminalizes "insulting" political and religious leaders. This is despite the fact that the Legal Committee and the Human Rights Committee within the Iraqi Kurdistan parliament have refused the application of this law until now.

The Religious Endowments and Affairs Committee within the Iraqi Kurdistan parliament submitted a draft law to the parliament leadership regarding the protection of religious sanctities in the province. If approved, the law would prevent journalists and writers from addressing religious matters.

According to HRW, if passed, the law would be a serious violation of basic free-speech standards in the Kurdistan Region. It could prevent investigative journalism and disclosures about high-level corruption in the oil-rich region.

The report also indicates that in 2012 the KRG arbitrarily arrested and detained at least 50 journalists, critics and opposition political activists, and prosecuted at least seven of them on criminal charges related to insulting or defaming public figures, according to information obtained by HRW in six visits to the Kurdistan Region.

Article 2 of the Kurdistan Press Law (No. 35 of 2007) protects journalists' right to "obtain information of importance to citizens and relevant to the public interest of diverse sources." The law also says that journalists are protected from arrest for publishing such information.

HRW said that the regional government must respect the press law and end the harassment of journalists and other critics. Parliament should enact a freedom-of-information law that guarantees the public's right to know, and ensures that journalists have access to information held by government and public institutions.

Commenting on the HRW report, Azad Hamad Amin, the head of the Kurdistan Journalists Syndicate, said that journalists also suffer from the fact that the press law is not applied in the region.

At the same time, Amin criticized the HRW report for not referencing the semi-annual reports issued by the Kurdistan Journalists Syndicate.

Every six months, the syndicate issues its semi-annual report on violations and abuses against journalists in the region. The most recent report, which was on the last six months of 2012 and issued in January 2013, documents breaches and violations.

The syndicate's report, which covered the last six months of 2012, documented three cases of abuse against 14 journalists, and eight cases of threats against 11 journalists. This is in addition to six cases in which 11 journalists were prevented from covering certain topics, two cases involving the detention of five journalists, two cases of arrest and a single case of imprisonment.

The head of the Kurdistan Journalists Syndicate told Al-Monitor: "In our report we mentioned several cases of violations and breaches that could be worse than those cited by the HRW report. However, we noticed that they cited specific sources and did not refer to our report."

While Diya Boutros, the head of the Human Rights Committee in the KRG, stressed that the regional government would pay attention to the periodic reports issued by international organizations regarding the freedoms of opinion, media and regional press.

He added, "We care about these reports and we have committees that will study and discuss their content, and we will issue an opinion regarding what has been proposed."

During his interview with Al-Monitor, Boutros went on to say, "We hope that all of these international organizations will refrain from relying on specific sources and will look at more than one source, so that their reports will be credible. They should adopt an honest approach. Relying on specific sources and neglecting others will result in a flawed report that does not reflect the truth."

In its report, HRW relied on information from local independent centers and organizations that are concerned with defending the rights of journalists and freedom of opinion, alongside activists in the field of defending human rights and journalists rights who had been subjected to abuse or harassment.