Kurdish oppposition politicians have accused the Kurdistan Regional Government of mismanagement ahead of deliberations on the 2013 federal budget, of which the region will receive an estimated $18 billion, writes Abdel Hamid Zebari. 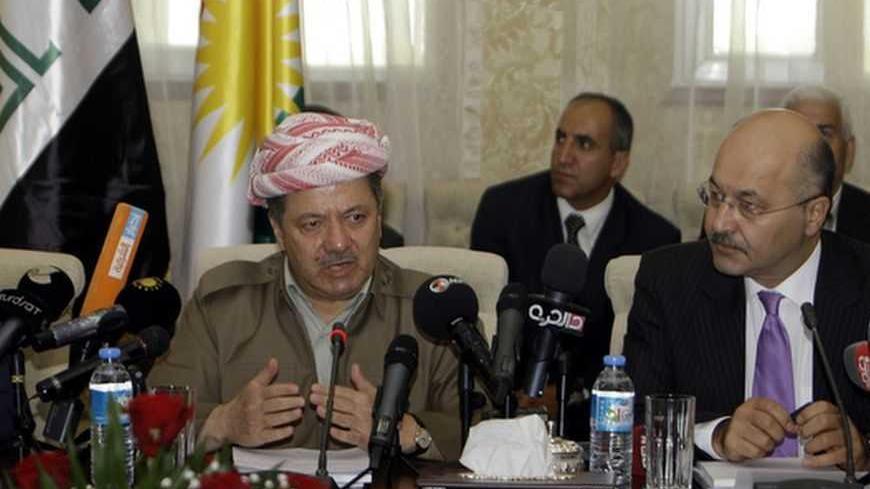 Ever since opposition forces emerged in the Iraqi Kurdistan Parliament following the 2009 elections, in which they won more than a quarter of the seats, there has been discussion regarding the region's budget law.

The region receives 17% of the total Iraqi federal budget. As this amount is expected to be about $18 billion in 2013, the opposition has intensified its accusations against the region's two ruling parties, claiming that they have wasted money and used the budget for partisan purposes. These parties are the Kurdistan Democratic Party, led by Kurdistan President Massoud Barzani, and the Patriotic Union of Kurdistan, led by Jelal Talabani, who currently holds the post of Iraqi president.

According to unofficial statistics, the Kurdistan region is home to more than five million people, concentrated in three governorates: Erbil, Sulaymaniyah and Dohuk.

The three opposition forces in the semi-autonomous Kurdish region — the Movement for Change, the Islamic Group in Kurdistan and the Kurdistan Islamic Union — have boycotted parliamentary debates on the budget, and accuse the provincial government of not setting clear rules for the distribution of the budget.

Adnan Osman, a member of the opposition Change Movement, said that heated discussions between the opposition and the ruling bloc are a normal occurrence. Speaking to Al-Monitor, Osman said that "every year, the draft budget witnesses an unjustified deficit." He added, "There is a deficit in the provincial budget, and we feel that there must be austerity measures taken in regard to the ministries' budgets. There should be a reduction in some of the expenses that we consider to be excessive."

The planned deficit for the region's 2013 budget is estimated at 1.68 trillion Iraqi dinars (about $1.5 million).

However, Barzani and Talabani's parties feel that the opposition is more concerned with fomenting anti-government sentiment among the Kurds than they are with studying the draft budget and identifying its gaps.

Omar Nuraddini, the deputy head of the government's bloc in the Kurdistan parliament and a member of Barzani's party, said, "The opposition is not concerned with filling the gaps or enriching the draft budget. Every year there are attempts by opposition parliamentary blocs to discuss the budget outside of a professional, objective and legal framework."

He asserts, "The opposition's goal is to provoke the public. Even when dealing with the facts and figures in the budget they do not talk about the existing facts; rather, they try to take a politicized position to influence the public. This is especially true given that a number of provincial and regional elections will take place this year."

It has been decided that elections for provincial councils in the Kurdistan region will be held alongside general parliamentary elections, which take place every four years.

A member of the ruling parties' bloc noted that deputies from the opposition blocs do not always participate in discussions and meetings that occur in the committees. He then added, "They focus on expressing their opinions and debates to the media, as well as within the parliament, because media outlets have shown interest in the debates going on within parliament."

Usually, parliamentary committees study the draft budget and the Finance Committee prepares a report, which is then presented at the first parliamentary session to discuss the draft.

Each year the opposition demands an increase in the salaries of state employees, or calls on the government to reconsider the salaries of retirees or to incorporate new segments of society into the social-welfare program. This happened last year when they demanded that salaries for housewives in the region be paid by the budget.

Regarding these demands, Nuraddini said, "When the opposition demands an increase in allocations for certain groups, or an increase in salaries or funds given to projects, they must specify the source for this money. They say that the government should increase salaries, but they don't talk about how the government can procure these funds."

The Iraqi parliament has yet to approve the federal budget, which is expected to reach about $113 billion.

Economic analyst Idriss Ramadan stresses that both the opposition and the Kurdistan regional authorities must deal cautiously with the draft budget, and work to address its mistakes and shortcomings. He adds: "These discussions must be transparent and clear, so that both sides can take advantage of this debate and reach a consensus that is beneficial for the authorities and the opposition. The government must pay attention to the lives of its citizens and work on improving the services it provides them."