Despite accounts of major human rights violations in Iraq, the government continues to deny and criticize reports by international human rights organizations. 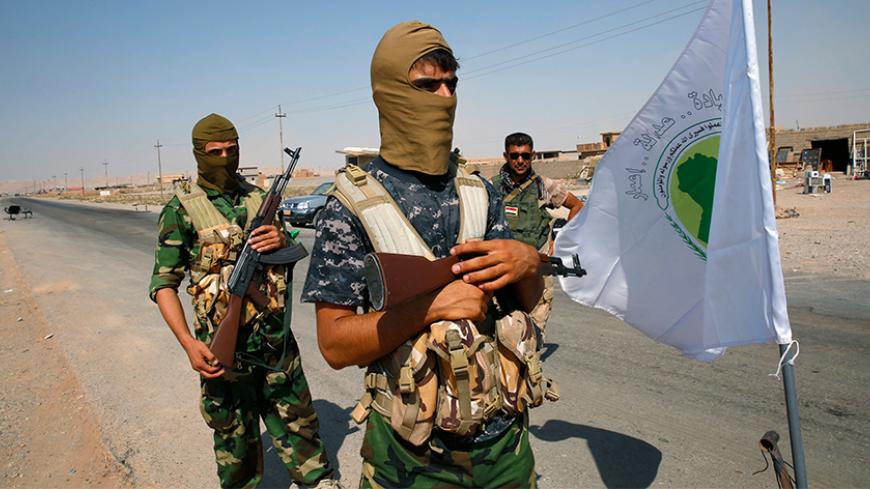 Fighters from the Shiite Badr Brigades militia stand near their flag as they guard a checkpoint along a highway recently taken from militants of the Islamic State, outside the town of Sulaiman Pek, Sept. 5, 2014. - REUTERS/Ahmed Jadallah

BAGHDAD — Human Rights Watch (HRW) issued a report Jan. 31 about the abduction and murder of dozens of Sunnis living in a town in the center of Iraq. “Members of [Shiite] militias, who the Iraqi government has included among its state forces, abducted and killed scores of Sunni residents in a central Iraq town and demolished Sunni homes, stores, and mosques following January 11, 2016 bombings claimed by the extremist group Islamic State [IS],” the report read.

Deputy Middle East Director at HRW Joe Stork was quoted in the report as saying, “Again civilians are paying the price for Iraq’s failure to rein in the out-of-control militias. Countries that support Iraqi security forces and the Popular Mobilization [Units] should insist that Baghdad bring an end to this deadly abuse.”

Saad al-Hadithi, spokesman for the information bureau of Iraqi Prime Minister Haider al-Abadi, told Al-Monitor, “The report reflects a conflict or civil war, but the truth is not so. There are terrorist gangs that have targeted all Iraqis in Diyala province to spark strife that would end in civil war. We should stop them, unveil their crimes and show the unity of Iraqis.”

In its annual report on the situation of human rights in the world in 2015, HRW wrote, “Iraqi security forces and pro-government militias committed possible war crimes during 2015 in their fight against the extremist group Islamic State … by unlawfully demolishing buildings in recaptured areas and forcibly disappearing residents.”

HRW added, “Mostly [Shiite] militias fighting [IS] with the support of the Iraqi government, such as the Badr Brigades, League of the Righteous, and Hezbollah Brigades, carried out widespread violations of human rights and international humanitarian law, in particular by demolishing homes and shops in recaptured Sunni areas.”

Asadi said, “The information in the HRW report is erroneous and aims at tarnishing the victories of these factions and acts hypocritically by accusing the Popular Mobilization Units and avoiding speaking about IS violations.”

The successive Iraqi governments after 2003 have not been satisfied with the reports issued by international human rights organizations, especially those shedding light on violations carried out by Iraqi governments or their affiliated militias. This has resulted in a state of ongoing dissatisfaction with those organizations.

Another report issued by the United Nations on Feb. 23, 2015, documented “serious violations of international humanitarian law and gross abuses of human rights perpetrated over a three-month period by [IS]. These include killings of civilians, abductions, rapes, slavery and trafficking of women and children, forced recruitment of children, destruction of places of religious significance, looting and the denial of fundamental freedoms.

In light of the atrocities committed by IS, namely burning civilians alive, HRW issued in September 2015 a report titled “Ruinous Aftermath” on violations by pro-government militias in the city of Tikrit in Iraq’s Salahuddin province.

Hadithi said in this context, “Most of the region’s governments are not on good terms with international human rights organizations. We, in Iraq, have found that some of the international reports were based on information from unreliable sources.”

He added, “Iraq calls on those organizations to base their reports on information from reliable sources that are familiar with the current developments, and to diversify their sources to make sure the information is accurate. It is preferable to have supervisors visit the scene more often and get information directly in the field.”

Sarah Leah Whitson, executive director of HRW's Middle East and North Africa Division, told Al-Monitor, “It is common that governments condemn or deny HRW reports on the situation of human rights in any country. Thus we are not surprised by the Iraqi government denying the facts and evidences in our reports.”

She said, “It is difficult for the governments to accept criticism, especially when the violations committed by the government against its citizens are documented, and specifically in times of conflicts or wars. This makes the government more prone to danger. However, we are on good terms with several officials in the Iraqi government and we find them more open to discussion than other officials in other governments in the region. I do not believe they neglect our reports on purpose. We are grateful for the many positive comments made by Abadi, as well as his commitment to curb the abuses committed by militias, investigate and punish those responsible for such abuses, and we hope he will abide by this commitment.”

The same has happened with the semi-independent Kurdistan Regional Government. On Jan. 20, Amnesty International issued a report, stating, “Peshmerga forces from the Kurdistan Regional Government (KRG) and Kurdish militias in northern Iraq have bulldozed, blown up and burned down thousands of homes in an apparent effort to uproot Arab communities.”

A few hours after the report was issued, Dindar Zebari, chairman of the High Committee to Evaluate and Respond to International Reports in the KRG, said, “The claims of [Amnesty International] regarding the peshmerga in IS-liberated areas are false accusations, bias, and they neglect the peshmerga’s sacrifices as thousands of martyrs were killed and wounded to liberate the citizens of areas seized by IS.”

In this regard, Shereen Mohamed Reda, a member of Iraq’s parliamentary Committee on Human Rights, told Al-Monitor, “Iraqi officials need to thank international and local human rights organizations, because they alert them of the violations they are making or that are made by parties that are not under their authority. They also need to build positive relations with them.”

Reda suggested that the Iraqi government form “teams and special committees to follow up on the information provided in the international and local human rights organizations reports, and carry out field visits to places where violations occurred. This way it will be taking advantage rather than be harmed by those reports, thus revealing violations without any efforts.”

Ziyad al-Ajili, executive director of the Journalistic Freedoms Observatory in Iraq, told Al-Monitor, “Countries in the Middle East — especially those under totalitarian regimes — have always rejected human rights reports, using stylistic discourse rather than evidence. This is the situation, although these organizations refrain from saying anything without having any evidence. Thus the denial of these reports by the Middle East and Arab governments is irrefutable evidence on their involvement in human rights violations.”

He added, “Those running the Iraqi state think in a totalitarian way, and this is why they reject reports that reveal human rights violations — although the ruling political elite used to take advantage of international organizations, when they were against the Saddam Hussein regime. This is where human rights organizations condemned the dictatorship of Saddam’s regime. Unfortunately this elite has started to look like Saddam in everything they do.”

The Iraqi government continues to deny and criticize international and human rights reports on the flagrant human rights violations in Iraq today — whether they are caused by the government itself or groups affiliated with influential figures in the Iraqi state, such as militias close to political leaders. This is true particularly since some do not want their crimes to be labeled as violations.

The human rights situation in Iraq continues to deteriorate, especially after IS seized Mosul on June 10, 2014, and displaced and killed minorities and all those violating its orders, thereby exacerbating human rights violations in the country and causing widespread reprisals and chaos.