Many Sunni clerics in Anbar have fundamental disagreements with al-Qaeda and the Islamic State of Iraq and al-Sham (ISIS), and thus may play a key role in resolving the battles there. 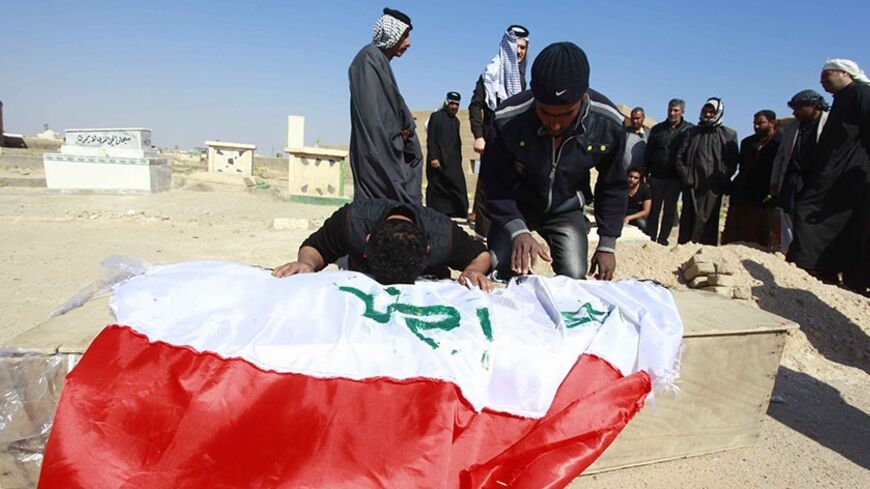 A man reacts over a coffin of a soldier, who was killed during clashes in Ramadi, during his funeral in Najaf, Feb. 17, 2014. - REUTERS/Alaa Al-Marjani

When hostilities broke out in Anbar province at the beginning of the year, many wondered why prominent Sunni cleric Abdul-Malik al-Saadi had chosen to keep quiet. Saadi became known during the Sunni demonstrations in 2013 as the spiritual mentor of the leaders of the clans’ demonstrations.

However, Saadi’s role in the recent battles has been unclear. He also did not give an opinion about the initiatives put forward over the last two months aimed at resolving the crisis.

His last official statement, referred to as Statement No. 40, was posted on his official website on Dec. 30, 2013, hours after the clashes broke out. He called on the people and clans of Anbar to defend their city, urged the security agencies to withdraw from the confrontation and called on residents to donate weapons to the “mujahedeen.”

Before that, in Statement No. 39, issued the same day, he urged the people of Anbar to defend “their faith, their land and their honor.” He also called on the local governments in the Sunni cities and on the Sunni deputies and ministers to resign, and on the army to ignore the order to fight in Anbar.

In subsequent weeks, he took no clear position toward the developments on the ground in Anbar, nor even toward some thorny events that accompanied the battles such as the emergence of ISIS and other fundamentalists. He did, however, hint at the importance of supporting the displaced families.

On Feb. 14, during the funerals of a number of clerics killed in bombing operations in Anbar, Saadi said that the government is justifying the bombings by using the presence of al-Qaeda and the Islamic State of Iraq and al-Sham (ISIS) as a pretext.

On Feb. 18, about 50 days after the fighting broke out, Saadi published a clarification (not in the form of an official statement) denying that he issued a religious edict prohibiting attacking the Iraqi army or requiring locals to chase away the militants.

Clearly, Saadi did not want to take clear stands on the events. He neither confirmed nor denied the presence of ISIS. He also did not comment on the initiatives put forth to resolve the crisis.

Although in his last comment he denied prohibiting attacking the Iraqi army, he did not issue a decree to attack it either. In his last statement, he indicated that people are carrying weapons in their attempts to expel the army from Anbar, and called for peace.

However, in his last comment, he also revealed that there is no communication between him and the gunmen in Anbar outside of the standard ways he makes his statements; his comment came after it was announced in a number of mosques that Saadi had issued a decree against harming the army and in support of hunting down the gunmen. Had there been clear lines of communication, undeclared statements or secret religious decrees, Saadi would not have had to come out and deny that he issued a religious edict.

In fact, the mystery surrounding the events in Anbar and the positions of gunmen from various organizations, their weight and their arming also applies to the position on Saadi himself, and the positions of a number of clerics, most notably Sheikh Abdul Hamid Jadou, a senior preacher in Fallujah who enjoys great prestige and who belongs to the same school of thought as Saadi.

Jadou has rejected armament and military escalation over the past few weeks. He harshly criticized the gunmen, the Iraqi government and the Sunni representatives in parliament. He called for peace, ending the bombing and the withdrawal of the army, and denied the existence of ISIS. And he did all that despite the fact that was giving his speeches from inside Fallujah until Feb. 21, when sources in Fallujah said that Jadou did not deliver the Friday sermon.

So we can say that Saadi, Jadou and a number of prominent clerics in Anbar are less enthusiastic about a military confrontation than a number of tribal leaders. Sources close to the clerics told Al-Monitor that the presence of ISIS fundamentalists on the ground directly threatens the moderate religious line in Anbar, especially since religious men have an awful history with al-Qaeda, which assassinated many of them under the pretext of violating al-Qaeda’s views or for not issuing religious edicts calling on the people to take up arms.

Although Iraqi officials seem to have no communication with Saadi and influential clerics in the crisis, the reality suggests that the lack of clarity in Saadi’s position toward the events so far can be something positive and a way toward resolving the crisis, just as Saadi refraining from commenting on any of the initiatives to defuse the crisis can also be viewed positively because he did not explicitly reject them either.

Most likely, Saadi and many clerics and leaders in Anbar want to end the crisis now to ensure reasonable government concessions regarding the people’s demands and regarding the ambiguities that sparked the battles. Moreover, the Iraqi government, which did not opt for negotiations and ignored the peace initiatives, is today compelled to open direct channels of communication with influential parties in Anbar to end the fighting.