US, Iran need to contain war of words

With talks beginning in Vienna on Feb. 18 , on a comprehensive nuclear agreement, rhetoric on both sides can make the already difficult compromises that much harder. 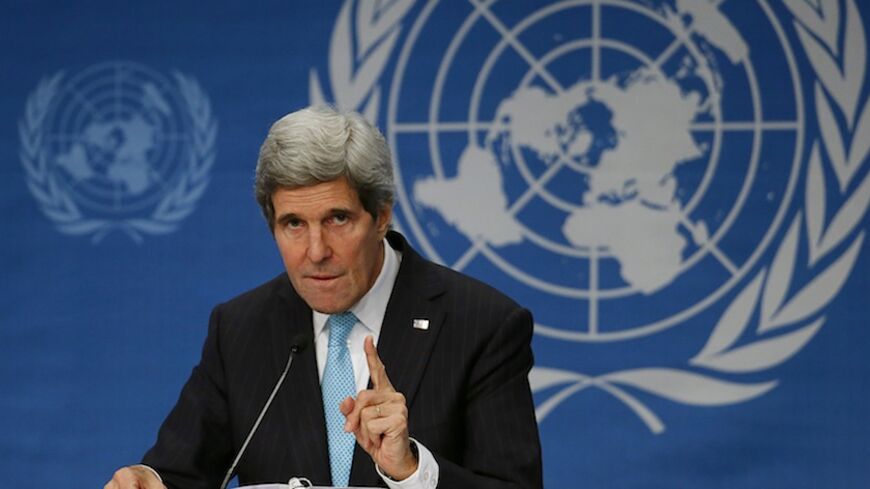 Building on the November 2013 Geneva interim agreement between Iran and the P5+1, aimed at reaching a “comprehensive solution” to bring the crisis over Iran’s nuclear program to a peaceful end, negotiators are scheduled to resume talks in Vienna on Feb. 18-19. However, a recent barrage of verbal attacks by high-ranking Iranian military and political officials, including Iranian Supreme Leader Ayatollah Ali Khamenei, in response to the repeated US use of the “all options are on the table” mantra, perhaps more palpable on the Iranian side, may have already hardened the two sides’ positions before the new round of talks has even begun.

The new round of US threats started with US Secretary of State John Kerry’s statements on Jan. 23 in his interview with Al Arabiya. If Iran does not meet the commitments it has made with the P5+1, “the military option of the United States is ready and prepared to do what it would have to do,” Kerry remarked.

Five days later, President Barack Obama, in his State of the Union address, warned Congress that he would veto any new sanctions bill. But in the meantime he used sharp language on Iran, from emphasizing the untrustworthiness of the Iranian government to threatening them with military attack. “We are clear-eyed about Iran's support for terrorist organizations … and the mistrust between our nations cannot be wished away,” he said. He added, "If Iran’s leaders do not seize this opportunity, then I will be the first to call for more sanctions, and stand ready to exercise all options to make sure Iran does not build a nuclear weapon.”

Obama made other remarks that in Iranian culture could be interpreted as humiliating and “talking from an upper-hand position.” At one point, he said, “American diplomacy, backed by pressure, has halted the progress of Iran's nuclear program and rolled parts of that program back.”

Iranian Foreign Affairs Minister Mohammad Javad Zarif, in an effort to contain the damage, shortly after Obama’s speech told CNN that such statements by the White House and the State Department were calibrated for the domestic audience. He has used this argument on several occasions to brush similar statements aside.

On Feb. 8, Khamenei fiercely responded to the Obama comments while implicitly targeting Zarif’s effort to justify and dismiss the aggressive behavior of the US officials. “The Iranian nation should watch these (nuclear) negotiations. People should see the rude remarks of the Americans, watch them and understand the enemy. Some want to distract people from the animosity of the enemy. No! See the animosity. See the duplicity. … The Iranian people should see this duplicity of the enemy and the ill and dirty intentions of the enemy. The nation should pay attention. One of the points US officials tell our officials is that they have no intention of changing the Iranian regime. First, they are lying; if they could, they would not hesitate for a moment to destroy this foundation. Second, they cannot.”

While in recent months there have been conciliatory exchanges and meetings between Iran and US officials, Maj. Gen. Hassan Firouzabadi, chief of the general staff of Iran’s armed forces, said on Feb. 12, “We are ready for the decisive war with the United States and the Zionist regime.”

The influential secretary of the Guardian Council, Ahmad Jannati, echoing these defiant sentiments attacked Kerry and Obama and mocked them saying, “You have used this 'option on the table' so much that your table is falling apart.”

To avoid any weakening of his position before the hard-liners as well as Khamenei, in a speech marking the 35th anniversary of the Islamic Revolution on Feb. 18, President Hassan Rouhani remarked, “I say explicitly to those delusional people who say the military option is on the table, that they should change their glasses. … Our nation regards the language of threat as rude and offensive.”

As far as Khamenei is concerned, there are three reasons behind his reaction to the US threats.

First, as this author and other experts familiar with Iranian culture have emphasized, pride plays a major role in Iranian politics that, for better or worse, has roots in Iran’s long history and civilization. In fact, as many observers assert, national pride and a desire to be seen as a regional power drives Iran’s nuclear program. This was the case even during the reign of the shah, when the country started its nuclear program in the early 1960s. Iranians find the language of threat and intimidation disrespectful and humiliating and this provokes sharp reactions from Tehran.

Second, Khamenei does not want to give the impression that dealing with the West is done out of weakness and fear. From a tactical point of view you should not appear weak, otherwise the “enemy” will take advantage and will demand more concessions.

Third, Khamenei seriously considers the effect that his passive position against the aggressive US remarks might have on conservative forces that consistently support the system. The grassroots supporters of the revolution are conservatives who are ready to give up even their lives to protect the Islamic system. His inaction, after spearheading resistance against what he calls “global arrogance led by America” for more than two decades, could seriously damage his stature and result in the disillusionment of the grassroots supporters of the system, which obviously might have dire consequences.

Could the intensification of this situation affect the negotiation process between Iran and the P5+1 and the search for a resolution on Iran’s nuclear issue? Some argue that Iran’s leadership feels immense pressure as a result of the US sanctions and has no choice other than to compromise with the United States. This school of thought views the Iranian system as rational and that it makes decisions on cost-benefit assessment.

The argument may be valid but could be problematic in defining “cost.” This view disregards that Khamenei has become a symbol of resistance to the United States among the conservatives and this provides him with authority as the Guardian Jurist, or Supreme Leader. There is a grave concern that his position will be seriously damaged if he tolerates the offensive US words, brushes them off and continues to work with the Americans under the bombardment of threats and perceived humiliating words.

Hard-liners are already making a lot of noise calling the US approach an insult to the Iranian nation. The Rouhani-Zarif team is determined to bring the nuclear standoff to an end, but they cannot do it at any cost. If the United States continues the language of threat and intimidation, the abandonment of the negotiations by the Iranian team is not impossible and if it happens should not come as a surprise.