Will Rouhani and Zarif defy Khamenei by holding direct talks with US on Syria? 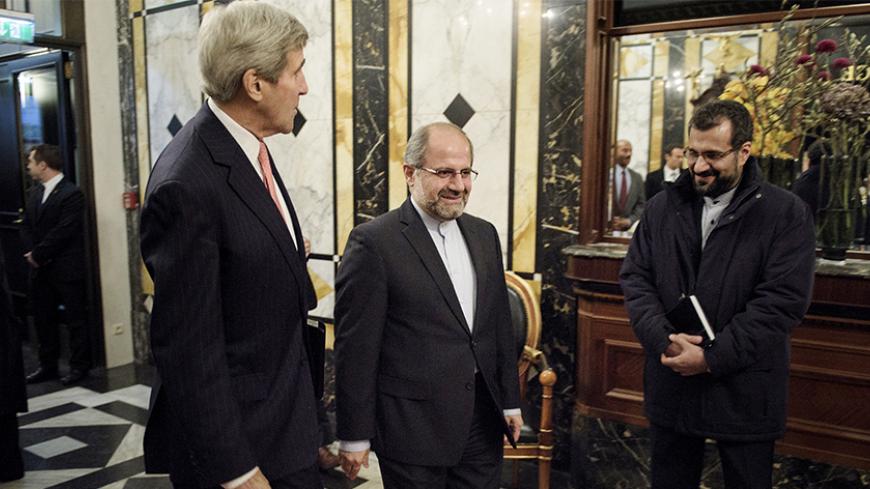 US Secretary of State John Kerry (L) is escorted by Iranian Foreign Minister Mohammad Javad Zarif's chief of staff (C) before a meeting with the foreign minister at the Hotel Imperial in Vienna, Oct. 29, 2015. - REUTERS/Brendan Smialowski

TEHRAN, Iran — Iran’s supreme leader plainly stated on Oct. 7 that “negotiations with America are forbidden,” seemingly addressing President Hassan Rouhani and Foreign Minister Mohammad Javad Zarif. Speaking before Islamic Revolutionary Guard Corps commanders, he argued that the prohibition stems from the many disadvantages it has. Indeed, Supreme Leader Ayatollah Ali Khamenei believes that the United States’ true intention with negotiations is to “infiltrate” Iran, and that only “carefree” and “simple-minded” people who are indifferent to “national interests” would support talks because they “don’t understand the matter correctly.” Thus, Ayatollah Khamenei’s opinion on Syria is that “there is no sense in other nations getting together and deciding on a system of government and the head of that government. This is a dangerous innovation that no government in the world would accept to be imposed on itself.”

It appears that Rouhani has taken the supreme leader’s red lines on board, as displayed in his recent interview with Italian newspaper Corriere della Sera. Addressing the topic of Iran-US relations, Rouhani said he sees no link between holding nuclear talks with Washington and having relations with it. Yet, he added, “One day, these [Iranian and American] embassies will reopen, but what counts is behavior. The Americans hold the key to this.” Through his further statement that “if they [the United States] modify their policies, correct errors committed in these 37 years and apologize to the people of Iran, the situation will change and good things can happen,” Rouhani has in effect adopted the same approach as his predecessors Ayatollah Ali Akbar Hashemi Rafsanjani and Mohammad Khatami. However, Rouhani has put all eggs, including bilateral talks on Syria, in the basket of the Joint Comprehensive Plan of Action — and its implementation. Indeed, Rouhani has said that “if the agreement is implemented well, it can be the basis for fewer tensions with the US and pave the way for a new era [in bilateral relations] … and after that, it may be possible for the two countries to enter talks on other issues.” This is while US officials, including President Barack Obama and Secretary of State John Kerry, have on various instances supported the idea of dialogue with Iran on issues other than its nuclear program.

The key question here is whether Iran’s policies in practice are different from those it declares. It appears that there is indeed such a discrepancy. After the signing of the JCPOA, a joke began circulating in Tehran that pointed to the inevitability of Iran-US talks on other issues, and indicating a thaw in bilateral relations. The content of the joke was that Iran would change the name of its central city of “Arak” to “Barack,” in honor of Obama, and that in return, the United States would change the name of Manhattan to “Mash Hassan,” which is a very casual way of referring to Rouhani.

Such a trajectory of cooperation has precedence in the history of diplomacy and international relations. For instance, the founders of the European Union started their cooperation with functional and technical issues, and the success they achieved in these fields was extended into cooperation on political, social and cultural matters. Indeed, functional “spillover” is a theory in international relations coined by David Mitrany and Ernest Haas that has been proven in practice. Although Ayatollah Khamenei prefers that there be no diplomatic contact between Iran and the United States on issues other than the nuclear program — including Syria — in practice, this will not be possible for several reasons.

First, given the multilateral nature of the talks on Syria that have been held in Austria, the Iranian delegation — led by Zarif – is able to negotiate with its American counterpart in the context of this multilateral setting, and there is nothing that Iranian conservatives can do about it. Conservative forces neither have an excuse to impose pressure on Zarif or Rouhani over such engagement. During his years of teaching at the Iranian Foreign Ministry’s School of International Relations, Zarif wrote a book titled “Multilateral Diplomacy: Theory and Performance of Regional and International Organizations"; it now seems that he is engaged in applying his own theories.

Second, considering that Russia, the principal ally of Syrian President Bashar al-Assad, is actively participating in the talks in Austria, Iran believes that it will become isolated and singled out if it fails to engage in dialogue with the main parties to the conflict — including the United States. Experience has also shown Iran that it will not be able to steer the crisis alone. In addition, Iranian officials have realized that inaction on their behalf may cause developments in Syria to move in an unfavorable direction.

Third, executive power is in the hands of Rouhani, and therefore, any initiative or diplomatic maneuvering during talks in Austria fall within his purview, thus placing Iranian conservatives in a passive position.

Fourth, the implementation of the JCPOA is a time-consuming process. Therefore, any negotiation with the American side on the matter can be used as a pretext to discuss Syria or other issues on the sidelines. Indeed, any interview by an Iranian official that might follow such talks would simply announce that discussions have been held with the Americans on the JCPOA, which is not a lie.

Fifth, Iranian public opinion and political culture view a lack of serious negotiations with foreign actors — including the United States — as a sign of weakness. There is also currently the expectation that if consultations can resolve a complicated matter such as the nuclear issue, why can’t they resolve the crisis in Syria? What’s wrong with engaging in talks with the American side if it will reduce the pain and suffering of the Syrian people? A wide spectrum of political and scientific elites inside Iran, including Rouhani, is now using the political history of Islam to prove this point. The precedents in Islamic history that are being presented by Rouhani’s supporters to justify talks with the United States include the negotiation and reconciliation of Imam Ali, the first Shiite imam, with Muawiyah, the caliph of his time — with Ali obviously representing Iran and Muawiyah representing the United States. Other examples of such precedent include the acceptance of Imam Hassan, the second Shiite imam, to forge peace with Muawiyah, or even Imam Hussein, the third Shiite imam, negotiating with Yazid, Muawiyah’s son and the caliph at the time, before the historic battle in Karbala. Finally, the most important precedent being brought up is the Hudaybiyyah peace treaty between the Prophet Muhammad and his enemies in Mecca. It should be noted that such interpretations of the history of Islam, by a religious government, are very significant.

As stated by former Iranian diplomat Seyed Hossein Mousavian, “It’s strange that while [the officials] of both countries consider each other their No. 1 enemy, the improvement of bilateral relations [between any two states] has not had as many external enemies as that between Iran and the United States, and neither have they been met with such internal opposition [in both Iran and the United States].”

In sum, Iran and the United States will hold bilateral talks on Syria, but this will probably take place in the form of discreet diplomacy accompanied by admissions and denials. Despite the rhetoric, the road to talks between the two nations on issues other than the JCPOA is open — but may be bumpy and fragile.