There is a strong and shared interest between Iranian President Hassan Rouhani and US President Barack Obama that ordinary Iranians imminently see — and feel — in the normalization of Iran’s economic engagement with the world. 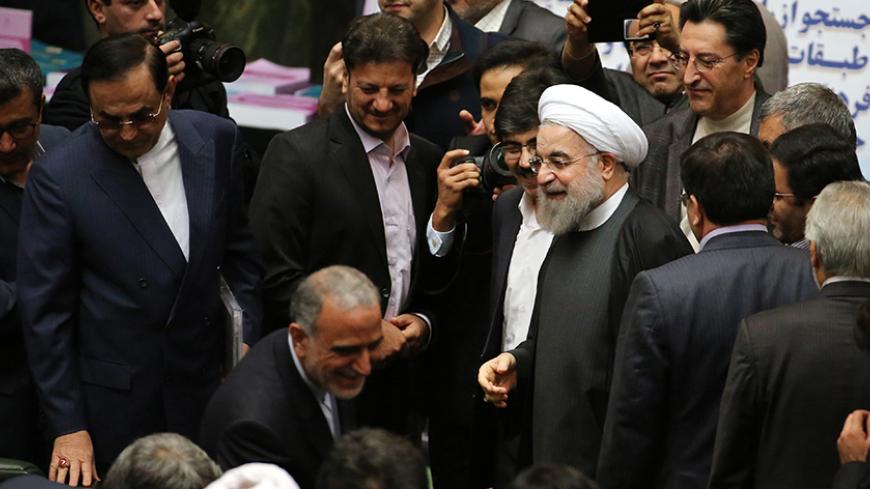 All is not well in post-sanctions Iran. In his first Nowruz message since the signing and implementation of the Joint Comprehensive Plan of Action (JCPOA), President Hassan Rouhani was muted about the sanctions relief. He only used the word “sanctions” twice, and when he did, he merely broadly stated, “Banking, financial, monetary, oil, gas, petrochemical, insurance and transportation sanctions … have been lifted. Conditions for the economic activities of our people have gotten greater and greater."

Supreme Leader Ayatollah Ali Khamenei is of a different mindset. In his Nowruz speech, in which he referred to “sanctions” at least 28 times, Khamenei stated, “The Americans have said that they would lift sanctions, and they have actually done so on paper, but through other ways and methods, they are acting in a way that the result of sanctions repeal will not be witnessed at all.”

Normalization of Iran’s trade with the world is of utmost importance to the Iranian leadership for multiple reasons. For Rouhani and his moderate camp, political fortunes are greatly tied to the JCPOA having a tangible impact on the lives of ordinary Iranians. Indeed, for those seeking a more open Iran, it is greatly unfortunate that the lifting of banking and financial sanctions has done little to remove fears about doing business with Iran. If you don’t believe the Iranian insiders who tell Al-Monitor that few to none of the major players yet dare go near Iran, listen to Ayatollah Khamenei, who usually avoids going into detail.

“Today, in all Western countries and in all those countries that are under their influence, our banking transactions have been blocked. We have a problem bringing our wealth — which has been kept in their banks — back to the country. We have a problem conducting different financial transactions that require the assistance of banks. … The US Department of the Treasury acts in a way … that big companies, agencies and banks do not dare to approach the Islamic Republic and have business transactions with it.”

To grasp the impact of lingering fears about engaging with Iranian banks and businesses, one must consider the motivations for Iran’s strategic decision to negotiate over its nuclear program. Moreover, one must grasp the nature of decision-making in the Islamic Republic.

The economic pain of the sanctions did not decisively bring Iran to the table. Rather, what contributed to changing calculations was concern over who Iranians may blame for the pain. Iran is no exception to the rule that all politics is local. Thus, a key motive for the Islamic Republic’s decision to seriously engage with the six world powers was to prove to Iranians that it has reasonably and in good faith sought a resolution to the nuclear issue. Khamenei’s aim was to show Iranians that their leadership has left no stone unturned in pursuing their interests. The centrality of avoiding blame extends to the very heart of Iran’s complex decision-making.

While Khamenei has final say on key national security and foreign policy issues, there are many decision shapers. The supreme leader’s ultimate role is to act as the check in a state void of institutions strong enough to provide systemic balance. Thus, while having final say on important matters of state, the supreme leader often also acts as a bellwether of the political climate. Though complex and cumbersome, Iranian decision-making has certain benefits — at least for the political leadership. One member of the Supreme National Security Council, the highest decision-making body in Iran, told Al-Monitor in late 2014, amid the nuclear negotiations, “Once a decision is made, it is very strong … if anything goes wrong, there is no one person to blame. The [political] system will say, ‘OK, we did our best, but … everybody was involved, [and] it seems we took the wrong decision.’ Otherwise, this blame game will cripple the country." It is against this backdrop that one must view Khamenei’s specific and repeated reference to the continued troubles of Iranian banks in his Nowruz speech.

To be fair, Khamenei’s anti-American discourse, which centers on words like “treachery” and “animosity,” has been amplified by a series of bad experiences stretching over the terms of four Iranian presidents. In the 1990s, then-President Ali Akbar Hashemi Rafsanjani’s outreach to US oil firms was met with Congress’ passage of the Iran and Libya Sanctions Act, the foundation for subsequent secondary US sanctions targeting the Iranian energy sector. In the early 2000s, under then-President Mohammad Khatami, tacit Iranian-American collaboration to successfully overthrow the Taliban ended as the Islamic Republic was labeled a member of the infamous “Axis of Evil.” Moreover, under President Mahmoud Ahmadinejad, Iran-US dialogue on Iraq faltered, while the White House not only rejected a nuclear fuel swap it had promoted but opted to instead push for intensified UN Security Council sanctions.

Despite these missed opportunities, most Iranians have so far favored engagement with the United States, as evidenced by their support for the JCPOA and the preceding negotiations. However, there are new and potentially troublesome dynamics at play that may greatly feed sentiment that faults the United States for the continued ostracizing of the Iranian economy.

In the past, talk of American treachery has fallen on deaf ears among many Iranians, partly because the Islamic Republic’s dealings with the United States were largely kept in the dark. In contrast, the highly publicized nature of the direct, high-level Iran-US engagement that led to the JCPOA has paved the way for anti-American sentiment to potentially find new breeding ground in Iran — should the United States come to be perceived as duplicitous.

To this end, there is a strong and shared interest between Rouhani and US President Barack Obama that ordinary Iranians imminently see — and feel — the normalization of Iran’s economic engagement with the world.

What is at stake is less about the future of the JCPOA and more about the risk of inopportune shifts in the Iranian political landscape at a crucial crossroads. Over the next 15 months, both Iran and the United States are set to hold important presidential elections. For President Obama, facilitating US commitments under the JCPOA is thus not only about securing an important aspect of his legacy, but more so, ensuring that his successor — whomever he or she may be — will encounter the same constructive Iranian approach he has benefited from so much. If not, it will be to the detriment of all.