Is Iranian economy weighing Rouhani down?

Polls show the Iranian president’s voter base is broadening in the aftermath of the country’s parliamentary elections, but that he also faces immense challenges related to the state of the Iranian economy. 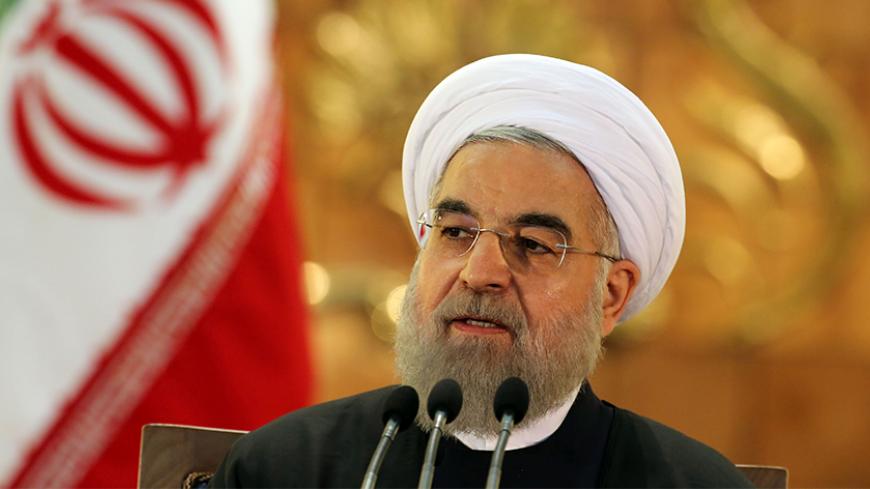 Iranian President Hassan Rouhani speaks during a press conference in Tehran after international sanctions on Iran were lifted, Jan. 17, 2016. Rouhani said that skeptics who said a nuclear deal with world powers would not bring economic benefits to Iran were all proven wrong. - ATTA KENARE/AFP/Getty Images

New opinion polls show Iranian President Hassan Rouhani to be in a strong position following the country’s Feb. 26 parliamentary elections. Among respondents, 81% of pro-Reformist voters and 61% of voters who cast ballots for independents said they voted for pro-Rouhani candidates. What is particularly noteworthy, however, is the broadening of the president’s base. Even among those who voted for the Principlists, half said they selected pro-Rouhani hopefuls. In all, 63% of those surveyed voted for candidates who support the administration, while just 22% voted for Rouhani critics.

The polling results are based on telephone interviews conducted Feb. 15-24 and March 3-13 among representative samples of 1,016 and 1,005 Iranians, respectively, with a margin of error for both polls of +/-3.2%. IranPoll.com, an independent Toronto-based organization, conducted both surveys for the Center for International and Security Studies at Maryland (CISSM).

Ebrahim Mohseni, a research scholar at CISSM, observed, “President Rouhani did not actively campaign against any specific political group, and this appears to have paid off for him as he now has very broad-based support.” Such support, however, also means that no one faction appears to have the upper hand in the parliament. Of the Iranians who voted, only a third said they supported the Reformists, while an equal proportion said they backed the Principlists. Roughly a quarter said they cast ballots for independent candidates.

Given that Rouhani’s presidency has so far been significantly defined by the negotiations over Iran’s nuclear program, which resulted in the Joint Comprehensive Plan of Action (JCPOA) signed on July 14, 2015, it should be noted that one source of support for the administration stems from positive views of the deal struck with the six world powers.

Indeed, the polls revealed that 73% of Iranians back the JCPOA. Although the level of support is highest among pro-Reformist voters (81%) and those backing independents (71%), a solid majority of pro-Principlist voters (61%) also back the nuclear deal. Eight months after the signing of the JCPOA, and more than two months after Implementation Day, however, it appears that enthusiasm for the agreement is softening.

While overall more than 7 in 10 Iranians approve of the JCPOA, the percentage of those who strongly approve of it has been on a consistent downward trajectory in past months. Last August, 43% of Iranians surveyed strongly approved of the deal, but that proportion has since dropped to 27%. Of note, however, the number of those who somewhat disapprove or strongly disapprove of the agreement has not increased since Jan. 16, Implementation Day. Indeed, the main trend appears to be a cooling toward the JCPOA.

This shift may have to do with the continued isolation of the Iranian economy despite implementation of the nuclear deal. Indeed, as lamented by numerous Iranian officials in recent weeks, including the supreme leader, Ayatollah Ali Khamenei, important aspects of the previous sanctions regime appear to in effect still be in place. In his Nowruz speech on March 20, Khamenei said, “Today in all Western countries and in all those countries that are under their influence, our banking transactions have been blocked. We have a problem bringing our wealth — which has been kept in their banks — back to the country. We have a problem conducting different financial transactions that require the assistance of banks. … The US Department of the Treasury acts in a way … that big companies, agencies and banks do not dare to approach the Islamic Republic and have business transactions with it.”

In this regard, the surveys show a decline in confidence among Iranians that the United States will live up to its obligations under the JCPOA. In a September 2015 poll conducted by Gallup, 45% of Iranian respondents were confident that the United States would uphold its commitments. The IranPoll.com-CISSM surveys show that this number has dropped to 29%. This may be a factor contributing to the softening support for Rouhani. While his favorability rating continues to be very high (84%), the percentage of people who say they have a very favorable view of the Iranian president has dropped to 40%, down from 61% last August.

Much of the dynamic involving support for Rouhani, and the JCPOA as well, revolves around the economic situation in Iran. The economy is the most pressing concern for Iranians. This cannot be overstated.

Since implementation of the nuclear deal, there has only been a slight increase in the view that economic conditions on the whole are getting better — 47% in January versus 52.4% in March. Of note, however, is that at the same time, the proportion of Iranians who say things are getting worse is dropping — 41% in January versus 33.3% in March. Thus, what appears to be occurring is a reduction in pessimism rather than an increase in optimism, which some might consider a matter of semantics.

Given that the Rouhani administration has managed to cut inflation from 40% in mid-2013 to some 12% at present, Iranians now seem most concerned about jobs, not rising prices. Indeed, in regard to what they think is the most important challenge for Iran, and what the next parliament should try to address, 15.5% said youth unemployment while 38.8% said unemployment in general. In comparison, only 6.2% cited inflation and high costs.

In this vein, 64.3% of those surveyed think Iran should increase economic engagement with Western countries, while a mere 6.9% of respondents said they favor a decrease. This does not, however, mean that Iranians see the solution to their problems as arriving from abroad. An overwhelming 53.7% said they are most eager to see Iran use its unfrozen assets abroad to create jobs at home. Moreover, only 2.5% said they are eager for greater access to Western consumer products. Indeed, while many greatly favor economic engagement with the West (58%), including 55% of Rouhani supporters, they continue to place higher priority on achieving economic self-sufficiency than increasing trade with other countries, which 36% view as a priority.

With 15 months left to his term in office, Rouhani, it appears, should further focus on job creation while expanding economic engagement with the West, but without being perceived as abandoning self-sufficiency as a guiding principle.