Rouhani Puts US to the Test

Presidents Barack Obama and Hassan Rouhani may have limited time to solve the nuclear crisis and reduce sanctions against Iran. 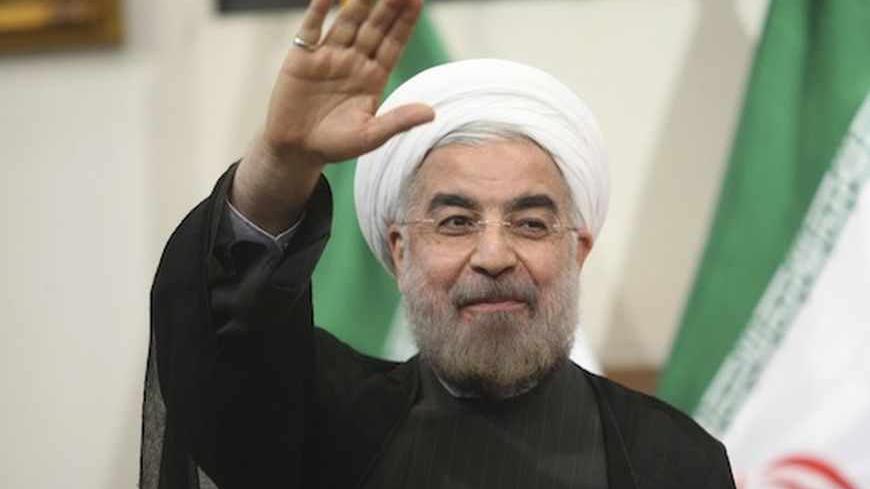 In the wake of several recent developments, hopes for untangling the Gordian knot between Iran and the United States that emerged with Hassan Rouhani’s election are gaining momentum.

Chief among them is the exchange of letters between the presidents of the two nations, initiated by President Barack Obama. While a decade-long confrontation over Iran’s nuclear program has spiraled into a perilous stage, this rare opportunity for settlement cannot be missed. However, misunderstanding the Iranians’ position and constraints could severely threaten the rapprochement sought by both sides.

The simple truth is that Rouhani should be offered sensible sanction relief to be able to persuade Iran’s leadership for concessions on its nuclear program. A piecemeal approach will not work. As a former Iranian politician told Al-Monitor, “The United States should be ready to give big if it expects to get big.”

Supreme Leader Ayatollah Ali Khamenei, after years of mostly uninterrupted opposition to direct talks with Americans, has endorsed the concept of “heroic flexibility” in relation to the United States. The reference is to a book that he translated from Arabic 44 years ago which analyzed the strategy chosen by the second Shiite Imam to make peace with an adversarial ruler, Mo’avieh, in the seventh century.

According to Hossein Mousavian, the Iranian scholar and former diplomat, Ayatollah Khamenei “has issued permission” for Rouhani “to enter into direct talks with the US.” Rouhani himself told NBC News last week that he has “full authority” from Khamenei to resolve the nuclear dispute.

While these developments are indications of Iran’s determination to open a new chapter in its relations with the United States, utmost caution should be exercised to avoid the history of past failed rapprochements repeating itself.

First, US officials should abandon the language of threat and intimidation.

On Sept. 17, referring to Obama’s letter to Rouhani, Marzieh Afkham, spokeswoman for the foreign ministry of Iran said, “Unfortunately, the US administration is still adopting the language of threat while dealing with Iran. … We have announced that this needs to change into the language of respect.”

Obama has continued to stress retaining the “military option” as an essential element of his Iran policy. “[Iranians] shouldn't draw a lesson that we haven't struck [Syria], to think we won’t strike Iran,” he said in an interview with ABC. In the same interview, referring to Iran, he asserted, “If you have both a credible threat of force, combined with a rigorous diplomatic effort, that, in fact, you can strike a deal.”

While the language may be aimed at placating the US Congress and Israel, or establishing an upper hand ahead of negotiations, such remarks could undermine the chances for progress. Mousavian has called such bullying tactics a “possible deal-breaker.”

Iranians are a proud people and the element of pride plays a pervasive role in the Iranian politics. Iranian social scientists repeatedly stress Iranians’ pride in their farhang (culture) and tamaddon (civilization) as recurring themes in Iranian national identity. Upon taking his oath of office in early August, Rouhani asserted, “The only way to engage Iran is dialogue from an equal position, mutual trust-building, [and] respect. … Speak to us with the language of respect, not threats.”

Second, the Iranian nuclear program has been constantly associated with national dignity. Many American scholars maintain that pride is the driving force behind Iran’s nuclear project. As a result, halting the uranium enrichment program, as repeatedly demanded by the United States, would incur unbearable political costs to Iranian politicians. They would be vulnerable to charges of abandoning Iran’s dignity if the nuclear project were surrendered. The cost is too high to afford.

Third, the revolution’s fundamental principle has always been resistance to pressure from foreign powers. Compromising under threat and coercion would clearly be a breach of that fundamental value. Simply put, the United States isn’t only demanding that the Iranian government give up its enrichment program under force; it’s pressuring them to relinquish their identity by accepting foreign control. Israel’s involvement only makes matters worse.

In his recent op-ed in The Washington Post Rouhani wrote, “The centrality of identity extends to the case of our peaceful nuclear energy program. To us, mastering the atomic fuel cycle … is about who Iranians are as a nation, our demand for dignity and respect and our consequent place in the world. Without comprehending the role of identity, many issues we all face will remain unresolved.”

The bottom line is that the United States wants Iran to remain a no-nuclear-weapons state. Therefore, logically, as long as an agreement provides for maximum transparency by implementing intrusive inspection measures, US national security interests should be protected.

It merits high attention that millions of Iranians voted for Rouhani to express their wish for an end to economic hardships, for which sanctions relief is key. Rouhani realizes that if he is unable to deliver sensible changes in terms of sanction relief, hardliners will organize a monstrous propaganda campaign against him and will marginalize him. And this will happen in a matter of months, not years.

He cautioned about this reality saying, “The world must know completely that this period of time for resolving the nuclear issue will not be unlimited. We have a specified period of time.”

This author, like many others, previously would have argued that Obama does not have enough authority to waive sanctions. In a July interview with Kenneth Katzman, a senior analyst and Iran expert at the Congressional Research Service, I asked his opinion about the president’s authority to relieve sanctions on the Central Bank of Iran, which many experts deem to be very damaging. Katzman said the president can use his own waiver if he “determines that doing so is in the national security interest” of the United States.

In later email exchanges I cast doubt on the president’s authority to ease sanctions. I wrote, “In the interview you referred to PL112-81 section 1245 as an example of the waivers that president can use for easing sanction on Iran’s Central Bank [for oil deals]. But the waiver is limited to almost eight months at best.” Katzman responded, “You had asked me about the waiver authority for the sanctions on financial dealing with Central Bank for the purpose of oil deals. The final law (PL112-81) allows for a 120 day waiver, and additional periods of 120 [day] waiver[s]. There is no stipulation for limiting the number of periods the waiver can be renewed.”

If that is the case, why does Obama not use his authority, waive the sanctions on the Central Bank with respect to oil deals for 120 days in exchange for some confidence-building steps from Iran? That will place Rouhani in a strong position to negotiate in the Iranian corridors of power for broader concessions in exchange for more far reaching sanction reliefs by the US and maybe even Europe. This is what Rouhani refers to as a “win-win” approach.

In any case, after this period the two sides would have put each other to the test, and therefore could assess the outcome and decide the next moves.