Syria is still a sticky issue between Hamas and both Fatah and Iran. 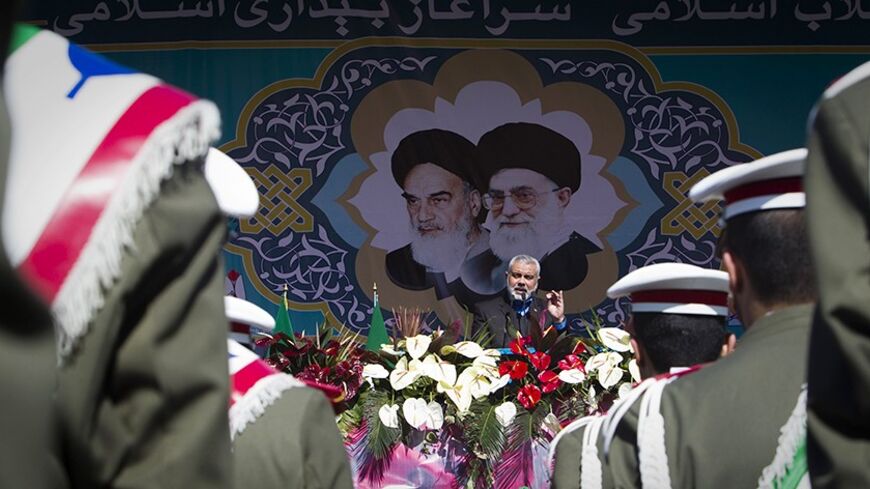 Soon after Hamas' fallout with Iran over Syria settled, some warmth returned to their relations. Meetings between Hamas and Iran were renewed at the highest levels in December 2013.

Yet just as Hamas thought that its relations with the Iranians had been restored, Jibril Rajoub, a member of Fatah's Central Committee, visited Tehran Jan. 27. The visit was the first of its kind by a Fatah official in years, and raised many questions about Hamas' ability to maintain the alliance with Iran that has endured for nearly 10 years. The trip drew the interest of Hamas amid talk that Fatah — its biggest rival in the Palestinian arena — would seek to exploit Hamas’ cool relations with Iran.

Rajoub, who arrived in Tehran as an official representative of Palestinian Authority President Mahmoud Abbas, met individually with Iranian Foreign Minister Mohammad Javad Zarif and his deputy. Rajoub said that this visit opened up a new page in bilateral relations and stressed that the PA was ready to strengthen its ties with Tehran.

A Hamas official in Gaza told Al-Monitor that Rajoub's statements welcoming ties with Iran contradicted Fatah's previous allegations that "Iran was blatantly interfering in internal Palestinian affairs and had a deep desire to commandeer the [Palestinian] cause and to use it to achieve [Tehran's] regional ambitions. [Fatah has also claimed that] Iran has shown a tendency for expansion at the expense of the interests of the Arab nation."

The same official, who spoke on condition of anonymity, showed Al-Monitor's correspondent a statement issued by Fatah in late 2010 rejecting "Iran's continuous attempts to use the Palestinian cause as a bargaining chip with the West, to implement its regional agenda as a means of interfering in internal affairs and to harm our unity and our vital national interests."

Against the Syrian revolution

Rajoub's visit to Tehran was preceded by the visit two weeks earlier of a number of Palestinian officials to Syria to discuss the crisis caused by the siege of the Yarmouk refugee camp. The most prominent of these officials included Abbas Zaki, a member of the Fatah Central Committee, and PA Labor Minister Ahmed Majdalani. Zaki met with President Bashar al-Assad, while Majdalani attacked Hamas and accused organizations affiliated with the movement of participating in armed operations against the Syrian army.

For its part, Hamas considered these accusations an attempt by the PA at a rapprochement with the Syrian regime at the expense of the residents of Yarmouk. Hamas said that its visit did not stop the siege and the "massacre" of the refugees, and considered Majdalani's statements on Hamas' position toward the Syrian crisis "brazen and opportunistic."

Al-Monitor spoke by phone with Izzat al-Rishq, a member of the Hamas political bureau currently residing in Doha.

Rishq, who has visited Iran a number of times alongside Hamas head Khaled Meshaal, said, "We as Palestinians need support and assistance from all parties to serve our cause, to liberate our land and [to ensure] the return of our people. Building relations should be a strategic principle, not a provocative tactic related to internal politics. Furthermore, these relations should not provoke any of the components of [Palestine], because the relations would then become a form of intervention in the internal affairs of states," hinting at the Fatah movement.

Although Hamas did not officially comment on what might be called Fatah's rapprochement with Iran and Syria, the same Hamas official told Al-Monitor that the visit was an attempt by Abbas to put feelers out about the Iranians' willingness to reconnect ties that had been cut.

It is worth noting that Rajoub made many appearances in the Iranian media, in which he said he had been sent on this visit within the framework of the wisdom of Iranian President Hassan Rouhani and his foreign minister in managing Iran's role and interests in the region, as well as Iran's opening to some Arab states.

Al-Monitor met with a former member of the Iranian parliament who spoke on the condition of anonymity, and asked him about the reasons for the rapprochement with the PA.

"Perhaps Tehran's interests outweigh the interests of the Palestinians, as a part of its policy to 'melt the ice' in ties with neighboring Arab states," he answered. "Thus, [Iran] hosting [Turkish Prime Minister Recep Tayyip] Erdogan embarrassed Tehran's biggest Arab rival: Saudi Arabia. The latter is trying to encircle Iran to prevent it from expanding regionally."

Meanwhile, the same Hamas official tried to downplay the repercussions of this visit, saying, "Hamas has no reason to panic. The road to a true rapprochement between Ramallah and Tehran is still long. The PA will face difficulties in pursuing a policy that differs from the Arab consensus — led by Saudi Arabia and Egypt — and that does not support strengthening ties with Tehran. Therefore, symbolic visits and diplomatic statements for purposes of flattery do not raise the fears of Hamas,” he added.

Hamas-affiliated media outlets covered Rajoub's visit, and the Al-Aqsa satellite channel dedicated an entire segment of its programming to the topic Feb. 1. Al-Aqsa discussed Fatah's desire to strengthen its regional alliances, which would help it expand its political options after years of estrangement with Tehran. According to Al-Aqsa, Fatah was trying to fill the void resulting from the decline in relations between Hamas and Iran, in an attempt to accumulate political options and increase the number of its regional friends. Fatah even seems to have strayed from its traditional principles and ethics in its alliances, and is considering only in its own interests, according to the channel.

Meanwhile, some social media activists, including Yousef Farhat, one of Hamas' most prominent faces in Gaza, addressed the subject. He raised this issue on his Facebook page, asking, "After this visit, will we hear the masses chanting against Fatah and accusing them of converting to Shiism, as we heard when Hamas was allied with Iran?"

He concluded by asking about the benefit of a Fatah-Iran rapprochement given that the former has entered into negotiations with Israel and ruled out a resistance program. Fatah has even confronted resistance groups through security coordination with the occupation forces.

"Fatah's recent contacts with Iran and Syria are a limited step, only related to tactics," Rishq said.