Turkey is trying to find the best way to control the impact of shopping malls on Turkey’s urban culture. 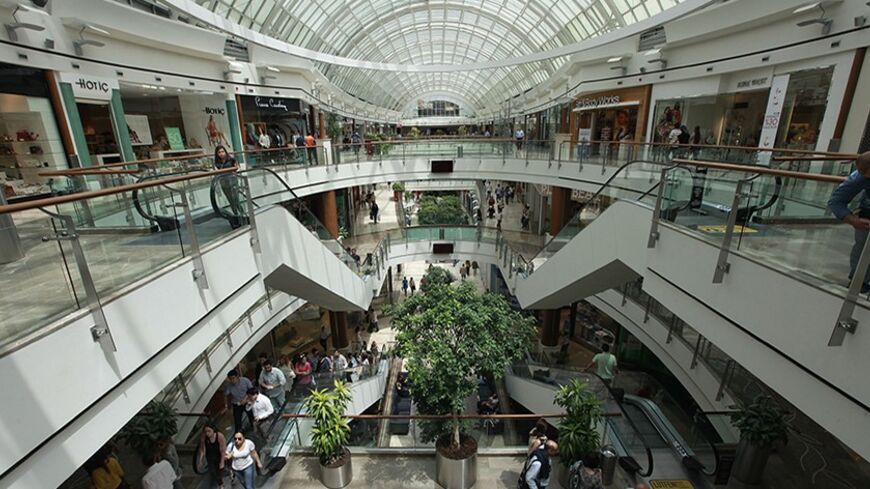 During his recent official visit to Italy, Turkish President Abdullah Gul tweeted praise for Rome’s beauty, but when he commended its lack of shopping malls and skyscrapers, he reignited perennial Turkish bickering on the topic.

While part of the population and government see shopping malls as entertaining and beneficial for Turkey's economy and society, others express concern for the destruction of small shopkeepers’ and artisans’ business, and some blame shopping malls for contributing to alienation, slamming them as the “holy shrines of consumer capitalism.”

Small wonder the opposition to building a new shopping mall in central Istanbul sparked a chain of protests this past summer. While there will be no shopping mall at that particular location, more are being built across the country.

Hurriyet printed a report prepared by the MPG/RDM consulting company on Jan. 24. The front-page article “Shopping malls: the locomotive of the economy” counted 333 malls in Turkey, with a complete rentable space totaling 9.2 million square meters [99 million square feet]. In terms of contribution to the economy, the shopping-mall sector provided 360,000 jobs in 2012 and 385,000 in 2013. The total number of visitors to shopping malls was 1.5 billion in 2012, and that number rose to 1.6 billion in 2013. Hence, expectations are positive, and the building of new facilities goes on. In 2014, there should be around 35 new shopping malls opened in Turkey. This would raise the total investment in this sector to $50 billion. For 2014, envisioned sales are estimated at 75 billion lira ($34 billion).

Many of the new shopping malls are tied to huge real estate development projects, usually including residence spaces and luxury offices. In the increasingly competitive environment, developers don’t shy away from extravagant projects. One such example is Viaport Venezia in Istanbul’s underprivileged suburb of Gaziosmanpasa, promising narrow historic-feeling streets, water channels and big squares that will be the sites of festivals like in Venice, Italy. The shopping mall to be built is to feature ceilings nine meters tall [29.5 feet], and special technology is to be used to create an artificial skyline to produce the feeling of being in a open-air space (as in the Venetian hotel in Las Vegas). The number of visitors per month is expected to be 1.5 million.

Citizens are divided on the topic. Some people wish to help artisans keep their business and prefer small stores over big ones. On the other side is the ever-increasing allure of the services that shopping malls offer. For example, one of Istanbul’s malls started Concierge+ services four years ago, offering assistance to guests. This same shopping mall has featured art exhibitions and seminars since 2003, while the new design and comfort of its renovated cinema attracts crowds that like to enjoy films in a stylish environment. In another Istanbul mall, KidzMondo, a 4,000-square-meter [43,000-square-foot] entertaining and educational space for children, opened to satisfy parents seeking a safe environment and fun activities for their kids.

Shopping malls make efforts to offer something for every pocket and interest. The latest research into consumer perceptions by the the Council of Shopping Centers showed the profile of a typical shopping-mall visitor is one of a high-school graduate, working married woman of 37. More precisely, about 63% of mall visitors are women, 56% of whom work, 28% with university degrees and 45% high-school graduates, and 61% are married. The visitors cite their reasons for going to the mall as: shopping (58%), to pass time (38%), eat (21%), meet friends (15%), entertain children (8%), window shop (8%), go to the cinema (5%) and cultural activities (1%). The usual time spent in malls increased from 2.3 hours in 2012 to 2.6 hours in 2013.

There are 92 malls in Istanbul alone, and the total amount of mall space surpasses the area of Luxembourg. Yet, working on Istanbul’s reputation as a regional shopping Mecca, best testified to by the Istanbul Shopping Festival project, has been a conscious effort and continual investment. The budget for this year’s festival has been announced as “limitless.” Several sectors, including retail, tourism, transport, hospitality, health and entertainment are to benefit from these activities. Organizers expect 10 billion lira ($4.5 billion) in sales and over 1 million visitors this year.

Yet not everyone thinks the contributions of shopping malls are all positive. The disputes between the big malls and unions of craftsmen and artisans often sound like a David-and-Goliath fight for survival. With such perceptions, it's no wonder people such as Abdullah Sevimcok from the Antalya Union of Tradesmen and Artisans (AESOB) expressed joy when the plan to build a new mall in the Konuksever neighborhood was rejected by the municipality due to public pressure.

There are developments in the ongoing dispute; the new draft law for the regulation of retail trade could impact the $250 billion retail sector in a way that makes the building of both shopping malls and small stores very difficult anywhere. Expert commissions of local administrators, academics, artisans, craftsmen and industry chambers would create feasibility studies and strategic plans determining the needs for any store, big or small, street by street. Even though obeying these plans would be voluntary, those who don’t adapt would not benefit from any state support. The Ministry of Customs and Trade will write a new constitution for retail trade, and smaller artisan shops would be more protected against colossal sale campaigns. Discounted products would no longer be available only in big malls, but in small grocery stores, too, and tradesmen and craftsmen’s work would be available in big shopping malls as well.

As expected, the reactions to draft law vary greatly. While Bendevi Palandoken, the president of the Confederation of Turkish Tradesmen and Craftsmen, called the draft law “super, excellent,” Vahap Kucuk from Federation of Shopping Centers and Retailers stated that effective regulation already exists, so there is no need for a new law. Palandoken said that 1,145,000 artisans and craftsmen abandoned their businesses between 2005 and the first six months of 2013. The majority of these businesses were grocery stores, franchises, small coffeehouses and hair salons.

The good news is that this year for the first time, all are invited to participate in the Istanbul Shopping Festival, which previously included only big shopping centers. Therefore, the fight between the little stores of tradesmen and craftsmen and big shopping centers is transforming into cooperation.

It remains to be seen how the quarrel between the big and small players will play out, but one thing seems certain: Whereas retail consultants predict that “as many as half of America's shopping malls” will fail within 15 to 20 years, their numbers in this part of the world are only increasing. In the first six months of 2013, Russia built more new shopping space than any other country in Europe, followed by Turkey. Furthermore, the analysts see emerging Central and Eastern European markets as favorable for further development in the near future.

That said, according to the above research, people cite all of the following as positive points of shopping malls: variety, dynamism, food space, novelty, safety and security, spaces for children’s play, sales and campaigns, quality and comfort. So those who oppose malls might have a hard time. Unless there are alternative spaces that the government creates or businesses open, with guarantees of a safe environment and a good time, many people will keep flocking to malls. In that case, the most important task will be to regulate new buildings in order to prevent the “ghost malls” phenomenon now common in China.