Turkey’s shopping mall boom has been hit by economic problems stemming from the lira's decline against the dollar and poor planning. 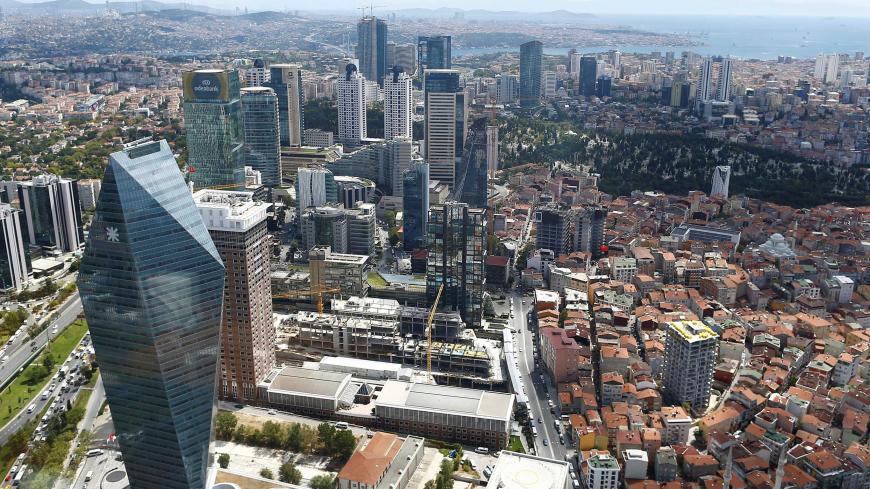 The Levent district of Istanbul, home to leading Turkish companies' headquarters and popular shopping malls, is seen from the Sapphire Tower in Istanbul, Aug. 16, 2016. - REUTERS/Osman Orsal

ANKARA, Turkey — Turkish Deputy Prime Minister Ali Babacan sounded the alarm in 2014: Industrial investment was in decline while a construction boom was luring entrepreneurs to build shopping malls and luxury housing projects with the promise of quick profits. He stressed the need to encourage investment in industry, warning, “Or else we are becoming an economy that builds very luxurious buildings, spending its money on stone and concrete, without producing.” Three years on, the Turkish economy is far from a major industrial revival, while dozens of shopping malls languish in a financial bottleneck or are headed toward closure, in particular in Ankara, Istanbul and Izmir.

According to the Turkish Statistical Institute’s 2016 Income and Living Conditions Survey, the material deprivation rate — which reflects inability to afford items and payments, such as for one week's annual vacation away from home, adequate heating, a meal with meat, chicken or fish every second day or basic appliances such as a washing machine and telephone — increased to 32.9% last year from 30.3% in 2015. Released Sept. 18, the survey showed that 68% of Turks were indebted, while 14.6% were under the persistent risk of poverty and 14.3% lived under the poverty threshold. Meanwhile, the richest 20% of the population took in 47.2% of total income. No doubt, this state of affairs bears on the viability of shopping malls and the retail sector in general.

Since 1988, when Turkey’s first modern shopping mall opened, in Istanbul, the sector has flourished, attracting $53.5 billion in investment, including $15 billion by foreign chains and brands. In Istanbul alone, the number of shopping malls reached 116 last year, with Ankara second, with 33. The total nationwide stood at 379, up from 145 in 2007. According to surveys and projections by realty companies, the figure is likely to reach 443 by the end of 2017 and 448 in 2018. At the same time, however, 10% of existing shopping malls are in the process of exiting the market.

One major reason for shopping malls' economic problems is their widespread practice of dollar- or euro-denominated rents. In Istanbul, for instance, the rent per square meter is often above $40 ($3.70 per square foot), which, given the trend in the Turkish lira’s depreciation, has sparked a flurry of closures.

The fırst bout of closures came in 2013, when 23 shopping malls fell victim to poor planning amid the boom. Some were converted to hospitals, private schools or office buildings. Yet about 20 of Turkey’s 81 provinces remain without a shopping mall, which has encouraged builders to seek new opportunities in the Anatolian heartland.

The problem of dollar-denominated rents grew so acute last year that President Recep Tayyip Erdogan stepped in, urging a return to the Turkish lira. His appeal appears to have had little effect, however. Barbaros Akyildiz, director general of a popular shoe brand with stores in 40 shopping malls, told Haber Turk that only two of the malls have switched to renting in liras.

Tekin Acar, head of a leading cosmetics chain, told one media outlet that his company has canceled contracts with 10 new shopping malls, warning that the state of emergency, in place since last year’s coup attempt, has created additional strains and uncertainties. “People are going bankrupt one after another, and this is going to continue,” he said, stressing that a number of international brands have pulled out of Turkey.

According to Abdullah Kigili, owner of a long-established clothing brand, the party is over for the shopping malls. “The period of joyous, abundant business is over,” he said in a Hurriyet interview. “They need to return to real rents. If those shopping malls go empty once, filling them anew will be impossible.”

Shopping malls have indeed suffered from the government crackdown after the coup attempt, which targeted a wide range of entities, including businesses with alleged links to the Gulen community, which the Erdogan government accuses of orchestrating the putsch. For example, the government seized a large shopping mall on the Ankara-Istanbul highway that housed hundreds of businesses and turned it over to trustees. In Antalya, Turkey’s main tourist resort on the Mediterranean, a company owning one of the city’s largest shopping malls met the same fate.

A Sept. 18 report by Deloitte’s Turkey branch notes that consumer spending is on the decline and that vacant spaces in shopping malls reached 20% in the first half of the year.

Bendevi Palandoken, head of the Turkish Tradesmen and Craftsmen Confederation, was reported as saying that eight malls have shut down in Ankara alone, while some newly inaugurated ones remain empty. This state of affairs should serve as a lesson, he said, warning that Ankara could become a “shopping mall junkyard” in the coming years.

Turkey’s retail sector, which employs 385,000 people and makes an important contribution to the economy, may see its shopping malls in further trouble in coming years due to the added impact of online shopping. Finance Minister Naci Agbal recently warned that amid the advance of electronic trade, “Shopping malls will disappear by 2030.”

Turkey’s shopping center development has been one of the most active globally in recent years, along with those of China, India and Russia. In the absence of regulations, many of the malls were built in city centers. Because the malls stay open late into the evening seven days a week, many smaller businesses in their vicinity have been forced to close. Now, the shopping malls themselves face a bleak future. Due to poor planning, scant foresight and the population’s declining economic fortunes, billions of dollars of investments may go down the drain.