Impressive numbers of Palestinians in Israel are crossing the Green Line destined for shopping and eating in the West Bank city of Jenin. 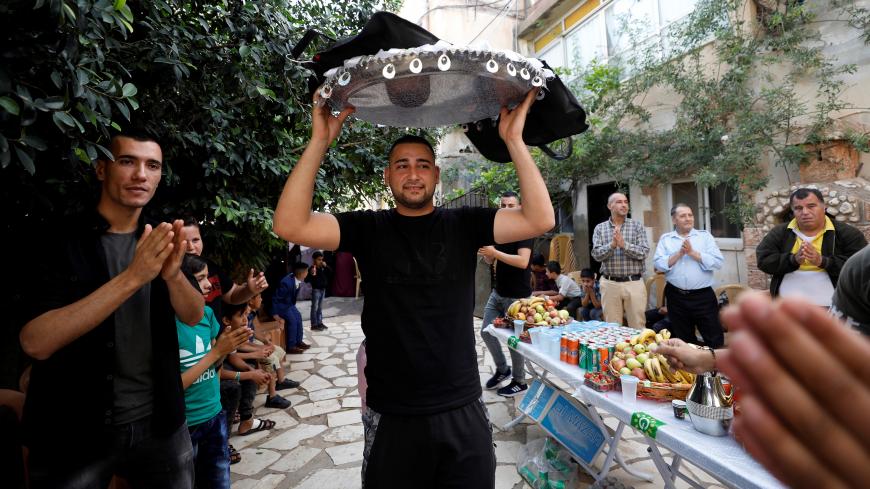 Hejres Torokman carries his suit over his head as he prepares for his wedding party, Jenin, West Bank, May 7, 2018. - REUTERS/Mohamad Torokman

RAMALLAH, West Bank — After years of stagnation following extensive damage and destruction by the Israeli military during the second intifada (2000-2005), Jenin currently finds itself in the midst of an economic renaissance, having emerged as a thriving retail shopping hub. Each year, hundreds of thousands of Palestinians from Israel cross the Green Line to frequent businesses and shops there, along with Palestinians from elsewhere on the West Bank. Both are attracted primarily by the affordable prices. Palestinians living in Israel access the West Bank city through the Jalama checkpoint.

In general, prices tend to be higher in Israel because per capita income is higher there than in Palestine. In addition, product type, quality and taxes, or a combination thereof, also contribute to prices being higher in the markets of Arab villages and towns in Israel than in the West Bank. In 2017, Mohammed Kamil, the director general of the Jenin Chamber of Commerce and Industry, cited Israeli figures in announcing that Palestinians living in Israel spent $365 million on the other side of the Green Line in 2016.

During the second intifada, hundreds of shops and facilities were forced to close or were destroyed. Jenin’s severely damaged economy began to recover around 2006. New shops were opened, and others were renovated, with clothing and footwear stores sprouting in large numbers. The opening of restaurants and fruit and vegetable shops followed. Then, in June 2008, Israel opened the Jalama crossing to allow a limited number of its Arab citizens to visit the city for shopping from 10 a.m. to 6 p.m. daily, without their vehicles. Over time, the number of Palestinians allowed to cross was increased, and they were permitted to drive into the city. Jenin lies 16 miles from Nazareth and 31 miles from Haifa.

Um Khaled drives to Jenin from Nazareth once a week to shop. “Jenin is very close to us, and prices there are lower than those offered inside the Green Line, not to mention the good quality of the products offered,” she told Al-Monitor. “I buy what I need and then eat in one of the city’s restaurants before heading back to Nazareth.”

Mohammad Mahajneh is a regular visitor from Umm al-Fahm. “I visit Jenin with my wife and two children,” he told Al-Monitor. “We are now shopping for Eid al-Fitr. We are mainly searching for children's clothes and sweets. Prices are affordable and merchants are friendly. Some traders tried to take advantage of us by raising their prices, but they are still relatively low for us.”

The friendly people are also one of the reasons Ahmed Telhami, from Shefa-Amr, comes to Jenin. In addition, he remarked, “Instead of shopping in expensive Israeli stores, we shop in Jenin and support its economy.”

Abu Ahmed al-Silawi, a Jenin merchant who owns food and candy shops, claims that 90% of sales in the city are to Palestinians living in Israel. “They spend on foodstuffs, clothes, shoes and other goods,” he told Al-Monitor. “Several stores have been able to keep their doors open because of them, while others were able to expand their enterprises due to the profits they reaped from these visitors.”

Silawi emphasized, “The commercial activity created by the Arab citizens of Israel in Jenin is noticeable. When the Jalama crossing closed on May 20 and 21 [for Shavuot, a holiday commemorating God giving the Torah to the Jews on Mount Sinai], commercial activity hit rock bottom. Arab citizens of Israel visiting the city encourage traders and businessmen to invest and expand.”

Arabs from Israel spend millions of dollars per year in Jenin. Kamil explained to Al-Monitor that this spending drives a need for additional labor, thus increasing employment, especially in the services sector, such as restaurants and parks. It also encourages traders to provide shoppers with high-quality goods.

“Around 860,000 vehicles crossed into Jenin from inside the Green Line in 2016 compared to 929,000 in 2017,” Kamil said. “The number of our visitors is increasing, which means more purchases, more shopping and more money.”

Jenin's real estate sector has also benefited as result of spending by Palestinians living in Israel. The province in general and the city in particular are experiencing a surge in construction projects, especially in commercial buildings.

“During 2017, around 700 new shops opened in the city and are duly licensed, raising the total number of shops to about 3,000,” Tawfiq Abu Obeid, a municipality official in charge of commercial markets, told Al-Monitor. “From the beginning of 2018 until the end of May, 380 new shops have opened, with the construction of dozens of shopping malls and towers. The number of new shops is expected to reach 1,000 by the end of the year with the completion of work on shopping malls now under construction.”

New shopping centers are opening on what seems like a weekly basis. On June 2, the fashionable Clock Tower shopping center was inaugurated, with dozens of shops. The complex was built on the ruins of the Cinema Jenin, the city's only movie theater, after its purchase and demolition.

The influx of visitors to the city has not been without a price, so to speak. “The large numbers of shoppers flocking to the city require greater regulation and infrastructure projects,” Kamil said. “The city's infrastructure cannot handle this number of visitors. Shoppers need expanded streets and parking spaces. The city's municipality has so far failed to provide and develop the necessary infrastructure.”

Abu Obeid defended the municipality's response thus far. “The surge in commercial activity in Jenin was unexpected. The city had not seen such a large number of visitors in years, especially during the month of Ramadan and the holidays,” he said. “The city of Jenin is relatively small, with a high-density layout. The massive influx of visitors from beyond the Green Line is too much for the city's facilities to handle. The city was not ready to accommodate such a large number of shoppers and cars.”

Abu Obeid said that plans are being considered for improving the city's infrastructure and providing basic and necessary facilities to ensure visitors and shoppers a more comfortable experience.

Despite the current positive outlook for the economic sector driven by the influx of shoppers to Jenin from beyond the Green Line, it could all end tomorrow if Israel were to decide to close the Jalama crossing.