The Iraqi capital's ancient and well-preserved Shorja market has long been a meeting point for Iraqis and a barometer of the political and economic situation in the country. 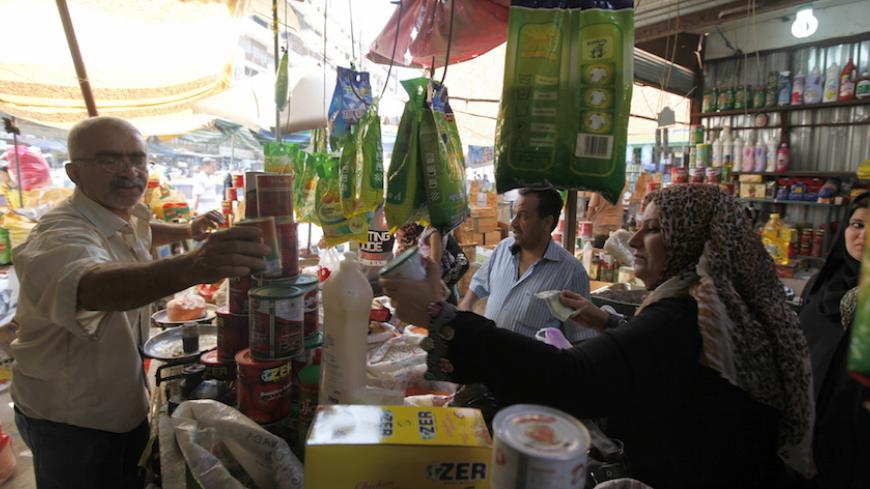 BAGHDAD — Souk al-Shorja is Baghdad's oldest market. It was established in the late Abbasid period about A.D. 750 and was first called Souk al-Rayahin then Souk al-Attarin. It is part of the historic area that includes the Abbasid palace on the Tigris River and the Khulafa mosque on al-Jumhuriya Street. "Shorja" means "salty water" in Arabic, and there was once a well where the market is now.

This market has remained throughout this period and later, and preserved the style of its shops, stores and squares that still swarm with shoppers and merchants.

Modern shopping malls in the Iraqi capital cannot compete with Shorja. It consists of a series of overlapping souks that preserved their traditional and popular character. It offers food and conventional household goods and more specialized items for religious occasions and holidays. Traditional spice dealers sell all kinds of spices, sugar, tea, grains and sweets.

There are several ways in to the market. Al-Monitor used the Rashid Street entrance, the narrow alleyways no more than three or four meters (10 or 13 feet) wide. Some of them are part of the market, which still preserves its old structure and has not seen any radical changes over the decades.

The activities in this market are not limited to wholesale and retail activities, but include various other transactions and importing and exporting business. It bustles with traders, shopkeepers, street vendors, shoppers, industrialists, brokers, owners of shipping companies and observers.

Saad al-Khafaji is a teacher from the city of Karbala, just south of Baghdad. He enjoys shopping and walking in this market buzzing with goods and people. He told Al-Monitor, “I enjoy visiting the market. This market has become a social and tourist destination. It is not only visited for shopping; some go there to spend time, meet people and check out new goods.”

Walking around in Shorja is not exactly a walk in the park. This famous market, which has long been neglected, suffers a dearth of services. The lack of security and poor infrastructure in and around the market has resulted in explosions, fires and floods.

Baghdad Mayor Thikra Mohammed Jaber Alloush visited the market on April 1 and pointed out the low level of services. She emphasized the need for attention to this market as a historical landmark for the city of Baghdad.

Many believe Shorja is more than just a market. Qusai Jawad, a merchant who owns a warehouse there, described it as a barometer of political, economic and social stability in Iraq. “A rise of prices in Shorja indicates a disturbed political and security situation," he said. "The large number of visitors and their facial expressions are indicators of social stability. In times of political and security unrest, the market becomes empty of shoppers and visitors, and the contrary is true.”

Jawad added, “Governments in Iraq are aware of this. In the era of the Baath Party regime, a friend of mine worked with the government in the market. He was assigned to send in daily reports depicting the general mood of the people in the market.”

The political and economic importance of the market also means it has been the target of armed attacks and bombings since 2003. The latest attack on the market came Feb. 7, when a suicide bomber blew himself up in Souk al-Arabi in Shorja, resulting in dozens of deaths and injuries. Another bombing a year earlier on Feb. 13, 2014, took the lives of six people.

Brig. Gen. Salah Hassan told Al-Monitor, “Being the economic generator of Iraq, Shorja market was the most targeted by bombings since 2003.”

In one section of the market, at the entrance off al-Jumhuriya Street, Al-Monitor met with Hamid Alwan, who sells books and stationery. He said, “The conversations between the market visitors, traders, passers-by and consumers paint a clear picture of the political situation in Iraq and reflect the extent of people's satisfaction or dissatisfaction with the situation.”

Writer-journalist Qasim Mozan told Al-Monitor, “Shorja market is not only a commercial hub but an economic power influencing political and economic decisions.”

Mozan believes that the people who brought down the government of former Prime Minister Abdul Karim Kassem were the merchants of Shorja market, who opposed his favoring of the poor and supported the forces that overthrew him. He added, “The Baath Party that took power in Iraq on July 17, 1968, realized the importance of Shorja market as an economic and political power. This regime assassinated merchants opposing its policies. In the 1950s, the Jews, representing the nerve of economic activities in the market, were forced out.”

On June 25, 1992, following a surge in food prices, Saddam Hussein executed 42 merchants, who were arrested at their shops in the market and faced trial within a few hours on charges of sabotaging the economy. The execution of these merchants on the same day shook Iraqi society.

Writer Jamal Jassim Amin told Al-Monitor, “Shorja market was the hunger indicator throughout the economic blockade years in the 1990s.”

Shorja market is also a place where the deprivation of the Iraqi people becomes evident.

Presidential adviser Laith Shubbar told Al-Monitor, “Shorja market, as an economic and historic landmark, has not been given the required attention by successive governments, but was subject under Saddam Hussein's regime to violent shocks, notably the elimination of indigenous traders, the confiscation of their money and the attempt to blur the market’s true identity.” He added, “Large markets such as Shorja are a microcosmic and accurate representation of the country’s economic, political and social situation.”

The fact that the Iraqi authorities recognize the importance of Shorja and its influence on politics and the economy has led officials to visit it and to order security be strengthened at its entrances. Some restoration efforts have even been made by the government, and the market is exempted from programmed electricity cuts, unlike other areas.

The political, economic and social importance of Shorja market led parliament member Abbas al-Bayati to call in 2011 for the formation of a committee to investigate the fires there, noting, “There are ‘hidden hands’ behind these incidents that aim to sabotage the economy and disrupt the life of citizens."