Growing numbers of Palestinians living in Israel prefer shopping and conducting other business in the West Bank because of a sense of belonging and to bolster the economy. 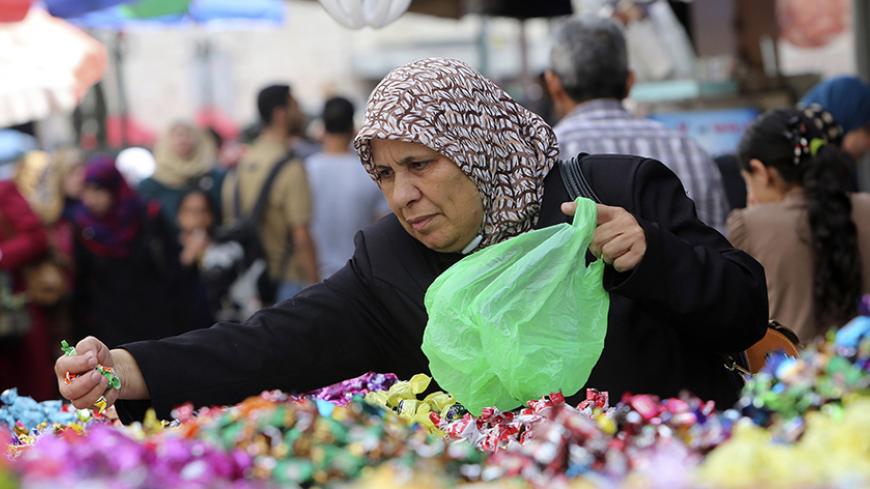 A Palestinian woman buys candies from a vendor at a market in Nablus, Sept. 30, 2014. - REUTERS/Abed Omar Qusini

NABLUS, West Bank — On a Saturday in Nablus, people are lining in front of the al-Aqsa sweet shop. The place is packed. Staff member Mohammad al-Nabulsi says the shop receives more customers on the weekends than on weekdays because of Palestinians visiting Nablus from Israel. On weekends, the shop operates at a faster tempo to fill the large number of requests for kunafa, a Levantine cheese pastry.

In the last four years, some 90,000 Palestinians from Israel have been crossing into the West Bank annually, after a long hiatus that began with the 2000 intifada, when the security situation prohibited such travel or made it too difficult.

Areej Makroush, from the town of Kafr Kana in the Nazareth district, told Al-Monitor, “The West Bank has become our internal tourism destination for shopping and entertainment, especially given the low prices compared with the cities in Israel. … In the West Bank, we have a sense of belonging and security. We don’t feel estranged, unlike shopping in Israeli cities. Here, signs and banners are in Arabic, and we are not obliged to speak Hebrew.”

In Makroush's view, despite some security instability, the West Bank remains safer than Israeli cities. She buys her clothes in Jenin, and she regularly visits Ramallah and Nablus for leisure.

Makroush, an information and history student at the University of Haifa, said her entire family travels to the West Bank as well. “We buy everything we need from the West Bank, even our groceries,” she remarked, noting that her sister bought all of her bridal necessities in Jenin, while one of her relatives purchased furniture for his entire house in Nablus.

Makroush said such spending habits are not driven solely by lower prices, but also by a desire to support the Palestinian economy. She said the same items might be found at cheaper prices in Tel Aviv during sales, but “we choose to buy from Palestinians.”

Makroush added, “We are often ripped off by traders, but we still prefer to buy from the West Bank than from the Israeli markets. The economic situation in the West Bank is very bad. The least we can do is help revive the Palestinian economy.”

This trend has recently turned into a phenomenon, with weekly convoys being organized to set off from predominantly Palestinian-populated cities in Israel for the West Bank.

Raja al-Khalidi, a researcher at the Center for Development Studies at Birzeit University, spoke to Al-Monitor about his findings on Palestinians from Israel visiting the West Bank. According to his research, more than 1 billion shekels (some $3 million) are being pumped into the Palestinian economy each year as a result of such tourism. The number of visits has increased from 840,000 in 2012 to 950,000 in 2015, constituting some 30% of tourist visits to the West Bank.

The experience of Fouad Zakarana, general manager of the Haddad Tourism Village Hotel & Resort in Jenin, appeared to lend credence to Khalidi’s assessment, saying 80% of his customers are Palestinians living in Israel. "The occupancy rate is higher during official holidays and summer vacation,” Zakarana told Al-Monitor. “The idea of establishing a resort was originally aimed at providing alternative tourist choices for the people of the West Bank after the closure of border crossings prevented them from going to Israel for recreation. However, what happened was the opposite. The Palestinians living in Israel were the ones coming to the West Bank for vacation.”

Zakarana agreed with Makroush's assertion that Palestinians in Israel feel a sense of security, nationalism and belonging in the West Bank. Social organizations, local Arab councils and women institutions have been organizing trips to Jenin to support the Palestinian economy.

Khalidi believes that Palestinian authorities are neglecting this trend, which could be better exploited economically. It is not being monitored by the Palestinian Authority or Israel, but all indications suggest it is not a fleeting occurrence, but a social, political and economic movement.

He told Al-Monitor that Palestinians living in Israel go to the West Bank not only to shop for consumer goods and products, but also for educational, accounting and legal services. This also stands to be a qualitative addition to the Palestinian economy.

Abdul Rahman said that in terms of investment in mechanisms to support Palestinian tourism, shoppers and other visitors to West Bank cities will be provided guidance centers, public facilities and protection for vehicles. No timeline has been set for implementing the plan.