Are deserted streets, shops the new normal in Ankara?

Gripped by fear and panic after an unprecedented string of bombings, Ankara’s residents are shying from streets and shopping malls, hurting the local economy. 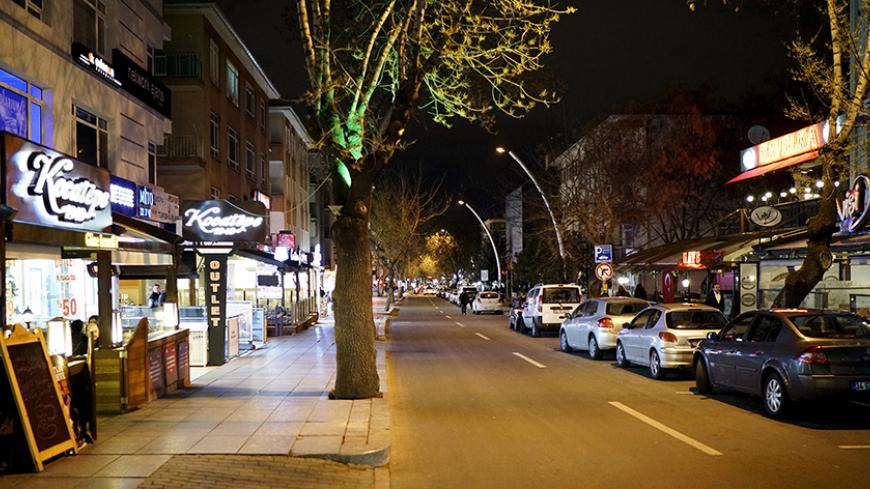 A deserted Bahcelievler 7th Street is seen during evening in Ankara, March 15, 2016. A suicide car bomb tore through a transport hub nearby on March 13. It was the third such attack in five months in the city, leaving many residents reluctant to venture out. - REUTERS/Umit Bektas
Sukru Kucuksahin
March 17, 2016

Ankara was a small provincial town when it became Turkey's capital 93 years ago. Today, it is the country's second-largest city with a population of 5 million. Over the past five months, three massive bombings have struck the city, claiming some 170 lives and leaving residents on tenterhooks. Fears are rife that this once-tranquil city is on its way to becoming another Middle Eastern capital mired in terror and bloodshed.

The string of attacks began Oct. 10, when two Islamic State (IS) militants blew themselves up in a crowd gathered for a peace rally near the main train station, killing 102 people. Then, on Feb. 17, two suicide bombers from the Kurdistan Freedom Falcons (TAK), a radical group said to be an offshoot of the Kurdistan Workers Party (PKK), slammed an explosives-laden car into a military bus convoy exiting the barracks a few hundred meters from parliament and the General Staff headquarters. The huge explosion, which killed 29 people, most of them army personnel, was heard across the capital, sending shockwaves among residents.

To soothe jitters, a few days later Prime Minister Ahmet Davutoglu introduced preparations for a special security plan, but only three weeks later, on March 13, Ankara was thrown into deeper shock after another suicide car bombing, also claimed by the TAK and similar to the previous one. It struck Kizilay Square, the very heart of the city, only 200 meters (0.1 miles) from the Prime Ministry.

The blast, echoing across the city, targeted a transport hub, claiming 37 lives. The mayhem took residents' fear and panic to new highs, with the press drawing comparisons between Ankara and Baghdad. The daily Cumhuriyet reported that Ankara’s death toll from terrorism since October surpassed those of Beirut, Kabul and Mogadishu.

Fear is palpable across the city, especially in shopping malls, which have become an Ankara hallmark in recent years. Boasting 33 shopping malls, the capital — whose dull landscape pales in comparison to picturesque Istanbul — is often the subject of jokes to the effect that shopping malls are the seafront promenades and picnic sites for Ankara's residents. Jokes aside, the malls attract tens of thousands of people every day, not only for shopping but also for leisure and socializing.

Al-Monitor visited two of the largest malls on March 16 to feel the pulse of the city. At Ankamall, a largely empty parking lot greeted the eye. Security guards estimated that the number of visitors was “down by at least 50%.” Inside the building, silence reigned in place of the usual bustle. When asked about the missing throngs of shoppers, a cleaner remarked, “How else could it be so clean? If it goes on like this, the economy will collapse, and we’ll be left without jobs. Why is this all happening? Who are we fighting with?”

Two young sales clerks chatted with gloomy faces at a cosmetics counter. It was around 4 p.m., and they had yet to sell anything, they grumbled. In a nearby coffee shop belonging to Turkey’s biggest chain, waiters tended to only five tables. One of them recounted how the packed mall was deserted within two hours after the last bombing.

“Most of the tables would normally be occupied at this hour,” he said. Another waiter chimed in, reproaching the wave of panic and simmering rumors of fresh attacks. “There was supposedly a bomb alert for this shopping mall as well. But I’m not nervous. It could happen anywhere. Plus, if people are already talking about it, [the bombers] would no longer do it here even if they intended to,” he said.

A couple of kilometers away, the outdoor parking area of the Armada mall also had plenty of vacant spots. Its food court, usually jam-packed, was similarly quiet. Chats with employees revealed two prevailing feelings: The third bombing had a much more traumatic effect than the previous ones, and the return of the crowds will take longer.

In the office wing of the building, an employee on his way home said, “Almost all the offices have been deserted. I work with foreigners, and they are all gone as well. What has become of our country?”

I then went to the store of a friend who is a member of the ruling Justice and Development Party (AKP). Neither she nor any customers were around. In a brief telephone conversation, she said that business had been bad for some time now, and the bombing rubbed salt into the wound. She seemed to put little responsibility on the government, however, instead blaming the Peoples’ Democratic Party (HDP), which the AKP accuses of collaborating with the PKK. “I just can’t tell you how angry I am with all those who voted for the HDP!” she said.

Some 4 kilometers (2.5 miles) away, the scene of the third bombing, Kizilay Square, was unprecedented. It was around 6:30 p.m., rush hour, the time at which the bombers had struck. Ankara’s main juncture — through which some 1 million people pass on a normal day — looked almost unrecognizable with so few people. One could even count the pedestrians waiting at traffic lights. The shattered storefronts facing the explosion remained covered.

Farther uptown, Tunali Hilmi, one of Ankara’s liveliest avenues, lacked both its pedestrian throngs and traffic crawling at the pace of a turtle. More than half of the shops were closed. In the ones that remained open, one could discern only gloom, making one ask, “Where is this going to end?”

The entertainment sector has also been badly hit. Irfan Demirkol, owner of the largest cinema in the Kizilay area, told Al-Monitor, “No one came on the first day [after the blast], so we canceled all the screenings. It’s the second day that we’ve closed all the halls again. We are waiting for the fear and panic to pass. After the previous bombings, it took three or four days. The bus stop, where the blast occurred, is used both by our employees and customers. This alone can explain how frightened we are. This is not about personal or corporate concerns, but we want the country to be a safe place because small businesses suffer the most.”

Orhan Karsak, who owns a plaza with more than 100 shops in Kizilay, said, “Shopkeepers can’t do business because people are staying at home. As a result, they start asking for rent discounts or expect sacrifices from employees. We had just begun to return to normal after the second blast, and now we are back to ground zero.” The government should activate support facilities designed for extraordinary circumstances, he stressed, “or else small shopkeepers will crash.”

The regional manager of a popular retail chain, who requested anonymity, said, “Everyone is in a panic. Friends are calling to urge me to stay at home, speaking of bomb alerts. The real danger, however, is that people seem to acquiesce to this state of affairs. Same with us. We are supposed to call clients and make sales, but one feels psychological pressure, like ‘What am I after?’ The customers’ return to the shopping malls will take much longer this time.”