A recent poll reveals that 87% of Egyptians agree that the issue of the Renaissance Dam should be internationalized. 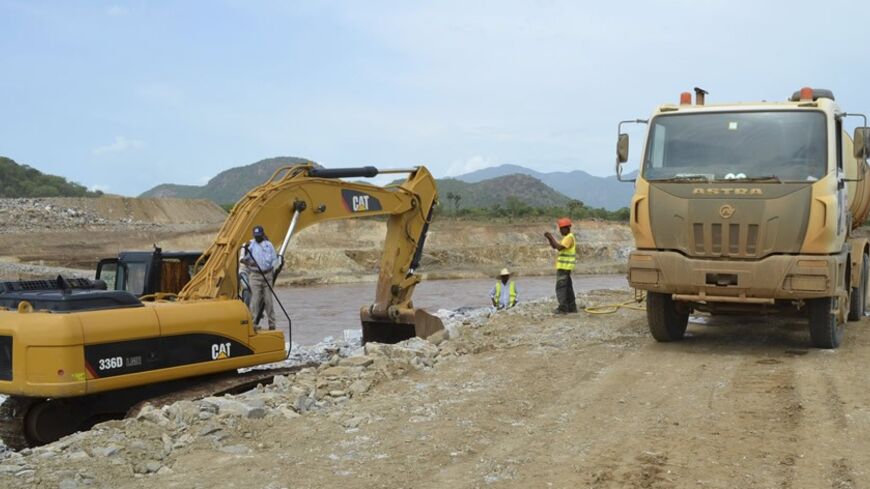 The Egyptian government has begun to take serious, overt measures toward internationalizing the Renaissance Dam. It is doing so through protracted negotiations taking place behind closed doors among the Supreme Committee for the Nile Waters, which includes representatives from all parties affected by issues of concern to the Nile River Basin. It is composed of staff from the Foreign Ministry as well as the Ministries of Water Resources and Irrigation, International Assistance, Defense and Electricity, and the Egyptian intelligence services.

On Jan. 20, Al-Monitor became the first to publish a report concerning this step, revealing Egypt's intention to internationalize its case against Ethiopia concerning the Renaissance Dam. At the time, Egyptian Minister of Water Resources and Irrigation Mohamed Abdul Muttalib released a statement denying Al-Monitor's reporting.

This comes at a time when, according to polls, the proportion of Egyptian public opinion that favors escalating the issue has risen to 87%. This is the percentage of people who answered "yes" when asked, "Do you support internationalizing the issue of the Renaissance Dam, following Ethiopia's rejection of initiatives to solve the crisis?" The poll was carried out by one of the most widely read news websites in Egypt.

These Egyptian moves toward international escalation are proceeding on two levels, in keeping with an agreement concluded by the Supreme Committee for the Nile Waters, according to a government source who spoke to Al-Monitor. The source stressed that, in fact, first-level steps began with the visit of Muttalib, along with Minister of Foreign Affairs Nabil Fahmy, to Italy, which is believed to be Ethiopia's principal technical supporter in building the dam. The Italian contracting company Salini Corporation has already conducted several studies and begun construction at the dam site.

The source noted that the next stage will witness other visits by Muttalib to a number of countries. It was agreed that the next visit would be to Norway, one of the countries that is funding the establishment of the Renaissance Dam. All of these visits seek to clarify the harm that Egypt will incur if the dam is completed according to its current specifications, aiming to win support from these countries for Egypt's position as well as bringing pressure to bear on the Ethiopian side. Egyptian officials seek to slow construction of the dam until an agreement can be reached with Cairo concerning the mechanisms for mitigating the expected damages to the Egyptian people and the beginning of an era of thirst in Egypt.

The same government source added in remarks to Al-Monitor that the second level of Egypt's plan to escalate the issue internally, which was agreed upon by the Supreme Committee for the Nile Waters, encompasses special steps to present international complaints against Ethiopia over its intransigence and insistence upon inflicting damages to Egyptian water security. This aspect of the plan has been postponed at present until after the completion of the Egyptian government's campaign to educate other governments concerning the harm that the Renaissance Dam will inflict on Egypt. He noted that the committee had put in place a number of options, including raising complaints to the United Nations and other international organizations such as the African Union. Bringing the matter before the UN Security Council has been ruled out for the time being, since it was decided to leave it to the next president-elect to determine whether or not to pursue that route.

Muttalib stressed that his visit to Italy had achieved its goals and would be repeated in many other countries and places. The mission of this and subsequent trips is to provide greater clarity on Egypt's water position, the challenges that Egypt is confronting with regard to the scarcity of water resources and the efforts that the Ministry of Water Resources and Irrigation is making in this area. Muttalib noted that, during the visit, he had explained the water resources situation and the reality of water scarcity in Egypt to Italian experts and officials. Those present expressed a keen interest in information concerning water resources and stressed that they were hearing it for the first time.

Muttalib stated there are a number of scenarios that the Egyptian government has agreed to implement in order to deal with the Ethiopian Renaissance Dam crisis. Among them is an effort to raise awareness in the world regarding the truth of Egypt's position toward development of the Nile River Basin, which he insists is not opposed to development in the countries of the basin, contrary to the version of events Ethiopia propounds. He stressed that the position of the political administration and the Egyptian government is fixed concerning the waters of the Nile: namely, refusal to compromise or give in on any point concerning Egypt's share, which has averaged historically at 55.5 billion cubic meters of water per year.

The Egyptian government, acting out of the belief that the Renaissance Dam threatens to leave many Egyptians without water, has already begun to internationalize the issue through a campaign to define the dangers of the Ethiopian dam in the international community, and to work to halt its foreign financing. Will the coming days witness the beginning of the next step, one of internationalization through formalized, international complaints?