Egypt has launched a diplomatic offensive to convince European powers to pressure Ethiopia against building the Renaissance Dam along current specifications. 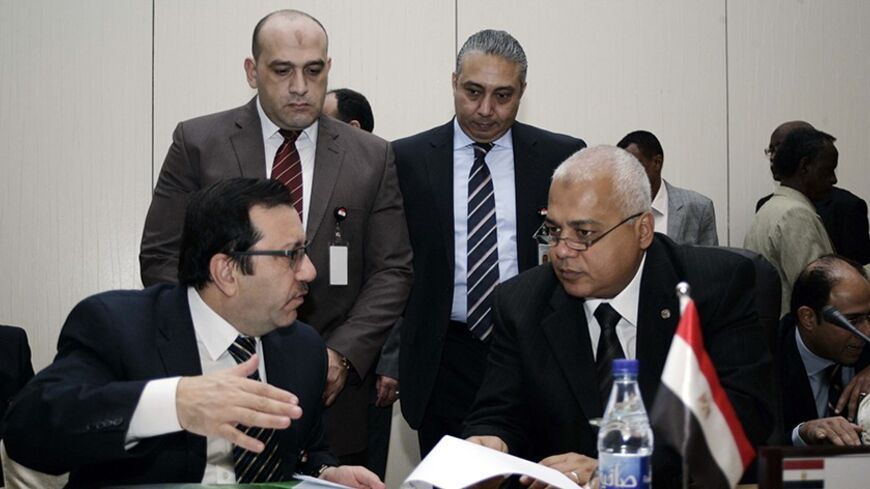 CAIRO — Cairo has begun a diplomatic campaign on two tracks, one explicit and one undeclared, with European countries and donor parties. This came after the Egyptian government escalated its campaign against the Ethiopian Renaissance Dam under its current specifications to protect Egypt’s historic interests in Nile water, following failed technical negotiations with Ethiopia.

“The campaign initiated by Egypt is on two tracks, one that is explicit and involves meetings by Egypt’s ministers of water and foreign relations with their counterparts in countries with influence in the Nile Basin, and one that is undeclared and involves meetings by Egypt’s ambassadors in these countries. The two tracks aim to persuade the international community to reject the dam’s construction because it may lead to further conflict and instability in the region of the Nile Basin,” a diplomatic source in contact with the Egyptian government told Al-Monitor.

The source, who preferred to remain anonymous because of the sensitivity of the issue with the Egyptian government, said, “More negotiations with Ethiopia only waste time and directly threaten Egypt’s water security. We realized that Ethiopia doesn’t want genuine solutions to end the crisis, but is only trying to portray Egypt as approving of the dam’s construction to facilitate access to funding. But [Ethiopia] didn’t provide genuine guarantees that the dam will not affect Egypt and has shown no intention to amend the technical specifications to minimize the potential risks according to the report by the international experts’ committee, which recommended reconsidering the dam’s safety studies.”

On Feb. 6, Egypt’s minister of water resources and irrigation visited Italy, where he explained the critical water situation in Egypt, the water problems that recur every year and Egyptian fears of the dam’s impact on the country’s water security. Afterward, Egypt’s Ministry of Water said in a statement, of which Al-Monitor has obtained a copy, that “the visit has achieved its goal. Italy has understood Egyptian concerns.”

The Italian Salini Construction company is building the Renaissance Dam after it signed a contract with the Ethiopian government in December 2010 worth 3.377 billion euros ($4.64 billion), with the dam due to be completed in six years.

Al-Monitor spoke to a government source familiar with the file of the Nile Basin. “Egypt’s open move, for the first time, and the visit by Italy’s irrigation minister has had an impact on Ethiopia, which invited us for dialogue again on Feb. 11 in Addis Ababa. However, Ethiopia again stuck to its point of view and rejected all confidence initiatives put forward by Egypt,” the source noted.

“Egypt will continue its international escalation and all options are open to us to protect our share of the Nile waters. And this decision was made after exhausting all attempts at dialogue with Ethiopia. Now visits are being planned to Norway, Sweden, the Netherlands and France. … We have also contacted all international donors such as the World Bank and the African Development Bank to demand they not give any technical support for the construction of the dam without making sure it will not cause damage to Egypt,” the source said.

“A copy of the report by the international experts’ committee that was signed by Ethiopia was sent. [The report] proves the existence of a potential risk to building the dam. But Ethiopia has not committed to finding solutions to reduce these risks,” the source stressed.

During a news conference on Feb. 13 after the Egyptian delegation returned from Addis Ababa, Ethiopian Prime Minister Hailemariam Desalegn said that his country will not back down from building the Renaissance Dam. He noted that if Egypt wants to internationalize the issue and send it to the United Nations, this will not help because there is no court specializing in arbitrating water disputes, and Egypt has no choice but to negotiate and engage in dialogue to reach a solution acceptable to everyone.

Egypt rejected participating in the ministerial meeting of the Eastern Nile Technical Regional Office (ENTRO), which is affiliated with the Nile Basin Initiative held in Addis Ababa on Feb. 4. The Egyptian Ministry of Irrigation said in an official statement, “We will not participate in the meeting in line with the Egyptian position taken in 2010 to freeze our activities in the Nile Basin Initiative after the unilateral signing of the Entebbe Convention by the Nile headwaters countries without reaching an agreement on the contentious items and without recognizing the legitimacy of any decisions that may be issued by ENTRO.”

For his part, Ambassador Gamal Bayoumi, the secretary-general of the Egyptian-European partnership at the Ministry of International Cooperation, said in an interview with Al-Monitor, “The issue of the Renaissance Dam has become very complex, and we have a state that is violating international customs and traditions. Egypt’s moves now target all countries that provide technical assistance for designing and building the Renaissance Dam through private contractors and also the states likely to fund the construction of the dam. … Discussing this crisis during the visits of Marshal [Abdel Fattah al-] Sisi and of the Russian foreign minister [Sergey Lavrov] has had a good effect because Russia’s relations with Ethiopia are still good, and can be leveraged for the benefit of Egypt.”

Bayoumi asserted, “We are still at the stage of dialogue. And we are trying, as much as possible, to attract Ethiopia to talk and negotiate. But [Ethiopia] is being stubborn and the impact of the dialogue session broadcast during [former President Mohammed] Morsi’s era has clearly caused the collapse of trust between Egypt, Sudan and Ethiopia.”

Aside from the language of political escalation, there has been an increased state of anxiety within the institutions concerned with studying the effects of the Renaissance Dam after Al Jazeera broadcast a report from the dam’s site showing initial construction, showing that Ethiopia is serious about building the dam.

The expert in the national committee to assess the effects of the Renaissance Dam, Alaa al-Zawahiri, told Al-Monitor, “Despite the lack of detailed and specific information that can be analyzed, the recording aired by Al Jazeera shows that concrete has started to be poured, which is the second phase after laying soil for the base. According to the dam’s stated specifications, laying the soil should be done over an area of ​​100 meters [328 feet], but there is no doubt that Ethiopia has completed all the initial work first and has put part of the concrete on the surface to gain time and impose a fait accompli on Egypt.”

“If this construction continues at that pace, there will be a fait accompli, and it will be difficult to persuade the Ethiopian side to amend the dam’s specifications or height after that,” said Zawahiri.

Egypt’s moves are still constrained by its difficult internal transitional phase. It’s important for Egypt to resolve its internal problems so that the water issue and the Renaissance Dam can return as a political priority for the next president.