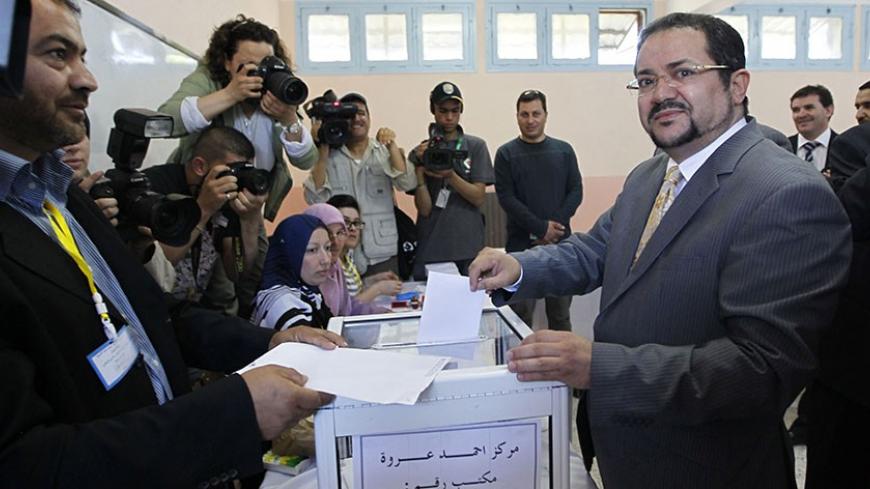 Abdelmadjid Menasra, leader of the Front for Change, casts his ballot during parliamentary elections at a polling station in Algiers, May 10, 2012. - REUTERS/Louafi Larbi

The situation in Algeria, just weeks before presidential elections scheduled for April, is confusing. Abdelmadjid Menasra, leader of the opposition Islamist-affiliated Front for Change, met with Al-Monitor to share his views on the current environment.

According to Menasra, “The recent events in Algeria have to do with the elections, and they are the result of the absence of the president [Abdelaziz Bouteflika] from the leadership of the political scene because of his health. The president has yet to specify his position on whether or not he will run in the elections. Thus, there was a vacuum that some supporters of a fourth term [for Bouteflika] tried to fill. But they did this in a wrong way and were struck by confusion as the deadline for announcing candidacies approaches.”

Menasra, who in 2010 left the Movement for the Society of Peace to found the Front for Change, went on to be more specific, clarifying, “Those supporting a fourth term for Bouteflika found themselves in a contradictory position. Some of them gathered signatures [in support of] the president, yet this was in violation of the law, since the president has not filled out the [official] forms to run. The interior minister responded to this, and [the government] responded violently to the statements of the secretary-general of the [National] Liberation Front [NLF] attacking the military security apparatus. Thus, a fourth term has become a complex problem for those supporting it, and this has prevented them from thinking about alternatives in the event that the president does not run in the upcoming elections.”

He concluded, “In addition, even if the president does decide to run, his health status will present many problems for his supporters related to the election campaign, [his] addressing the people, and going to vote on election day on April 17.”

From the perspective of this Islamist leader, who has demonstrated his tenacity in Algerian politics, the Islamists have not lost ground. “The Islamists have not lost their strength or popular support. Rather, the elections have lost their credibility and integrity to the extent that the [incumbent] authorities are considering a run for the current president, who is not even able to move or speak. [In the event that Bouteflika does run], they would falsify the results and say he won a majority, against the will of the voters,” Menasra asserted. “The opposition, including the Islamists, presented a set of demands to ensure the integrity and fairness of the elections, but the government did not respond to any of them,” he said.

The recent troubling events involving violence between Berbers and Arabs in Ghardaia, in the south, deeply affected Menasra, who calls for a real debate to settle this problem once and for all.

Menasra noted, “What happened in Ghardaia is not something new. We are accustomed to such events in light of the superficial treatment [by the government] that has accumulated and grown more complex. Today, [these events] reveal the government's inability to solve problems, hold a real dialogue and respond to popular demands. This is despite the fact that the problem, at its root, is not big. However, mistakes, downplaying [the problem], the lack of punishment for those who have done wrong and preventing the people from having elected representatives in a democratic and free manner, all of this transforms a small problem into a big problem. As a result, the government is unable [to do anything], and there is no popular civil agency capable of helping,”

He continued, “We cannot deny reality. We cannot deny our own inabilities, failures and mistakes, and we can't search for foreign parties to blame. The weakness comes from us. But this doesn't mean that there aren't internal and external forces that are trying to exploit [this weakness] to compromise stability. But how can a government that is unable to solve a problem in a single city ensure the stability of the country in the future and organize fair elections?”

On the latest dispute between the intelligence services and the leader of the ruling National Liberation Front, Menasra offered, “I have not heard or read anything about the army initiating legal proceedings against the secretary-general of the NLF after his remarks attacking the military security apparatus and its leader, blaming them for all the tragedies occurring in Algeria. In fact, [these statements] infringe upon the entire army and Bouteflika himself, in his position as president — the primary person responsible for the country — and also on his position as defense minister. The truth is these statements are part of the battle over a fourth term [for Bouteflika], and they are a part of settling scores in the absence of the president.”

He continued, “Through these statements, they [the NLF] wanted to transform the crisis over the fourth term into a crisis affecting all of Algeria and export fear to the people. This is because the ruling party is making decisions and implementing whatever it wants, and there is no outcry in the media. If there was any truth [to the NLF's] claim that it was implementing a religious state or distancing the security forces and the army from politics and partisan affairs, then why has this not been achieved by the president of the republic, who is also the leader of the ruling NLF.”

Regarding the Feb. 6 alert warning US citizens traveling to Algeria and labeling certain parts of the country as dangerous, Menasra adopted an optimistic tone: “Now, after great efforts and sacrifices made by the army, the people and some parties, Algeria is safe. There are no areas that could be classified as 'high danger' areas. However, the political confusion, the poor preparation for the presidential elections, the faults of the government and the absence of the president — in both practice and leadership, because of his illness — all of these factors make the future, as it pertains to the elections, vague. This has reached the point that [the people] fear critical scenarios, because some may want to use the presidential elections as an opportunity to agitate and make things worse. Thus, we in the Front for Change, reject such behaviors.”

“We believe it is necessary to recognize the elections as an opportunity for a political solution and democratic change, via popular will. Let's come to an agreement for the sake of bringing about a democratic transition after a long period [four decades of absolute rule]. However, refusing change, closing the doors to peaceful democratic [movements] in the face of the people, threatening citizens with chaos in the event that the people want change and using trickery to falsify the elections — all of these practices will only bring Algeria problems. And the country is not able to face these problems in light of the [government's] inabilities and weakness and the fact that the borders are [beset with problems]. This is in addition to the cross-border terrorist activity in the Sahel region.”

Menasra, discussing the Front for Change as a political force, declared, “The Front for Change believes in peaceful and democratic change, and we are keen to enable the people to have a choice. We believe it is necessary to take advantage of the presidential elections to build a real democratic system. Thus, we have called for a democratic consensus and hope that the Islamic, nationalist and secular currents will come to an agreement on a candidate who will vow to serve a single term in the presidency and directly after the elections launch a political and societal dialogue about reforming the constitution. This candidate should also discuss the essence of the ruling regime, including its nature and characteristics, and the relationships between various authorities, as well as the role of the military in this civil, democratic republic. Then, a consensual constitution should be drafted, to be a constitution for all Algerians. It should not be a constitution for the president alone, for the majority or for some groups but not others. The consensual president will then be in charge of forming a national unity government and organizing early legislative and local elections in order to strengthen the [representative] institutions. The president should be keen to promote national interests, to ensure that Algerians have all their rights and live in the shadow of peace, confidence, cohesiveness and unity. This is our proposal that we presented more than six months ago. We still hope that it will be achieved, even if we experience some difficulties along the way.”

Menasra expressed his hope that the upcoming elections will ensure the coherence and integrity of the country, noting, “There is still some time remaining until the elections, and we hope to succeed in agreeing on a consensual candidate. We hope that the current president provides guarantees that the elections will be fair. If he doesn't, and if after the elections [the government] does not allow for change, the future will be difficult, and anything could happen, including catastrophes, God forbid.”

“Things are in the hands of the president, and the army is the guarantor of stability. The army should also ensure democracy, and not allow [the government] to use it for electoral purposes in a way that distorts [the popular will] and prevents peaceful democratic change, stability and development for Algerians, in particular the younger generation. The latter will no longer accept the idea of historical legitimacy for its rule, nor will it accept [the president] treating them as if he is a patriarchal figure. They want a modern civil state that is ruled by the principles of democratic competition.”

Menasra said he wants to entrench democratic practices and ensure that the people have the freedom to choose their leaders. “There are two doors. If one opens the other closes. They are the door to democracy and the door to violence. Algeria is not far from chaos if freedoms are not expanded, democratic practices entrenched and change of rulers and rotation of power possible. Thus we in the Front for Change have made efforts for the sake of democratic change. We seek to prevent the environmental conditions [that encourage] terrorism and violence. Such conditions include despotism, corruption, exclusion, marginalization, contempt for women, distancing of youth, impoverishing society and spreading ignorance and illiteracy,” he said.

Menasra concluded by saying, “But we remain optimistic by virtue of our tolerant culture of struggle and our realistic vision for political work. And Algeria will be fine, God willing.”