With Algeria’s President Abdelaziz Bouteflika set to run for a fourth term, opponents and supporters engage in heated debates about the state and direction of the country, writes Kaci Racelma. 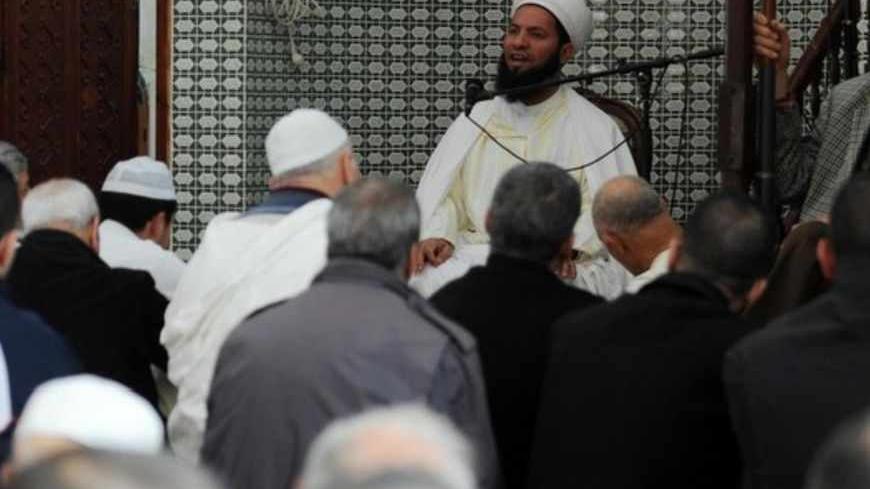 Sheikh Djelloul Hadjimi, the imam of the El Ouartilani mosque speaks during the Friday prayers on March 22, 2013 in Algiers.

Against the backdrop of a battle between supporters and opponents of President Abdelaziz Bouteflika, preparations for the 2014 presidential elections are starting in Algeria, a country in search of ideas and desperately trying to find its footing.

The two parties are openly competing for electoral hegemony in a context marked by scandals belittling prominent figures. For over 10 years, opposition groups were limited to registering for elections and most of the decisions were made by the head of state in office. But the Arab revolutions, which deposed Ben Ali and the like, gave wings to the opponents of Bouteflika, openly opposing a fourth term for the current residents of ancient Almoravia.

This is shown in the way that Ahmed Benbitour, the former prime minister, is advocating for change. “This is serious. The failed state is starting to completely decay.” This is how the situation has been interpreted by reputable economists among the population.

Benbitour is the first servant of the state to willingly leave power and thus challenge the policy advocated by Bouteflika.

This gives him considerable credibility among Algerians, who praise him and his sincerity. Benbitour, along with Ahmed Mechati, former mujahid and member of the member of the historical group of 22, and Sofiane Djilali, president of the Algerian party Jil Jadid (New Generation), are calling for Bouteflika’s political retirement.

The appeal of the alliance of the three big guns of the Algerian political scene for “a strategic alliance between the forces of change” to derail plans for a fourth term and a constitutional revision say a lot about the willingness of these figures to fight against “authoritarianism.”

Their entourage criticizes Algerian society's political apathy and especially that of the intellectuals, who are also called to contribute to change. This, they note, “should go through a presidential election without fraud and in which Bouteflika should not participate.”

A year before the presidential election of 2014, the only non-partisan candidate for this important deadline, namely Benbitour, is getting stronger. His popularity keeps increasing, especially among the country's elite that hopes for change. This alliance, which is working to mobilize citizens against a fourth term, is opposed by another political force, whose project is diametrically opposed. The extension of the current mandate, the revision of the basic law and trusting the government to run the elections are all promoted by supporters of the president and his bid for a fourth term.

The main driving forces behind the latter are Amar Ghoul, head of the founding body of the Rally for Algeria's Hope and minister of public works, and Amara Benyounes, secretary-general of the Algerian Popular Movement and minister of planning and environment. The former openly declared that his party will support the candidacy of Bouteflika if he seeks a fourth term. The latter considers the current head of state a person who can maintain the socio-economic balance and stability in the country in the face of the risks that could arise.

Louiza Hanoun, the first in command of the Workers Party, is added to these two supporters of Bouteflika. She openly accused Benbitour of being the main instigator of the events that have shaken the country’s southern region. Hanoun builds on the recent events that coincided with the carpet festival, which is celebrated every year in the province of Ghardaia, south of Algeria.

“We wonder how the carpet festival, which is peacefully celebrated every year in the province, turned into a political event this time,” she said. For his part, Benyounes, who believes that “the threat to Algeria persists” criticized "those who are trying to politicize the socio-economic demands of the youth in the southern cities."

"These arguments are not supported by facts, even though Benbitour is originally from the province of Ghardaia, which is the epicenter of the protest movements," an unemployed youth told Al-Monitor on the condition of anonymity.

The April 2014 presidential battle has started: Amid beating drums, the president accused of senility endorses himself for another term.