Algeria’s Civil Concord Law, which seeks to reintegrate reformed terrorists into society, continues to be a topic of controversy 14 years after its ratification, writes Kaci Racelma. 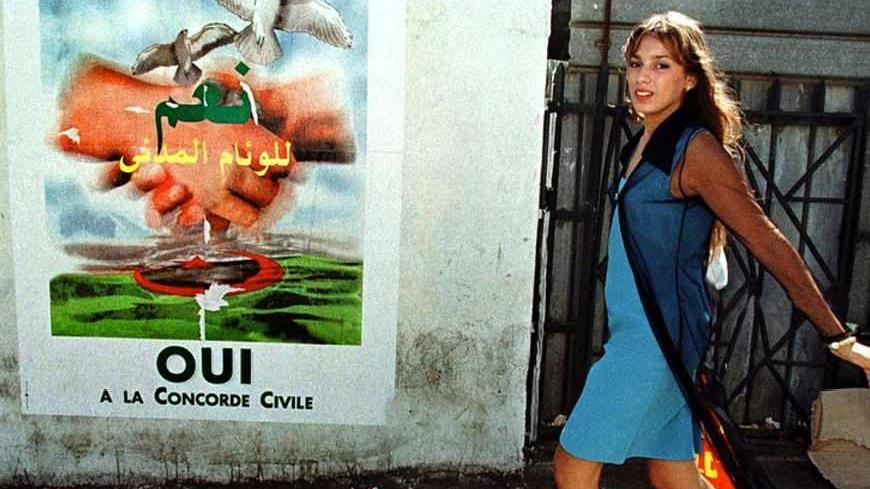 A young woman walks past posters for the referendum on "civil concord" in Algiers, Sept. 11, 1999. - REUTERS/Zohra Bensemra

The Algerian law on civil concord, which was passed Sept. 16, 1999, following a referendum by President Abdelaziz Bouteflika and had officially ended 10 years of war between the government and Islamist radicals, continues to be the talk of the town in Algeria.

This law was passed six months after the former Minister of Foreign Affairs under the rule of President Houari Boumedienne came to power (1965-1978) in a contested vote, following the withdrawal of six other presidential contenders.

Many praise the virtues of this law, which has achieved significant results on the ground. For more than a decade, the country has been struggling to get out of this vicious cycle of madness that was imposed by Islamist fundamentalists.

Almost 14 years after the referendum that was supported by the overwhelming majority of Algerians, the president’s law gave 15,000 terrorists the chance to repent. The advocates of this unique project have followed the same path to implement the Charter for Peace and National Reconciliation and to showcase its benefits.

In reality, however, hard-liners continue to roam the streets, especially in the center of the country, the Kabylia area and regions near the Tunisian border. These henchmen affiliated with al-Qaeda have totally rejected the charter’s provisions.

This law aims to reintegrate into society those who have renounced armed violence and grant amnesty to those involved in the formation of networks that used to support terrorist groups during the black decade.

This period, extending from 1992 to 1999, was the bloodiest phase of the history of independent Algeria. More than 200,000 people were killed in the most atrocious, inhumane way at the hands of terrorists, who have chosen to stay in hideouts to make their voices heard.

Emissaries have been sent to the hideouts in order to convince what the advocates of this law call “the lost ones” to disarm and reintegrate into society.

According to well-informed sources regarding this subject, 4,000 terrorists have benefited from this law and reintegrated into society without being dismissed from their work. Millions of other terrorists have chosen to give their friends the slip and applied for the new provisions of the law, including national reconciliation.

“The charter is overall a good initiative. But those who are guilty of crimes must be held accountable before the courts,” said Amar Zaidi, a human right activist, speaking to Al-Monitor.

For his part, Rebouh Idriss, head of communications in the Algerian Front for Change (FC), said that “this law that was initiated by the head of state a few months after he came to office in 1999, and was designed to put an end to the political and institutional crisis in the country. It almost follows on the draft law on amnesty that was previously launched by President Liamine Zeroual. The process is inadequate in terms of its non-expansion, as it does not cover other segments of society that were deprived of the right to engage in any political activity. The project should include all Algerians without exception.”

This policy is advocated on the ground. In fact, the committee in charge of the implementation of the charter has assumed the responsibility to process and deal with many cases. First of all, there is the issue of the missing people, who number 7,125, according to sources close to the government.

The families of the missing continue to demand information of their fate and insist on demanding justice for their victims. The authorities are truly perturbed by these cases as they are unable to provide appropriate answers that could relieve the families’ pain. The fate of the families that are victims of terrorism also remains unclear.

Up until 2006, about 500 children were born in hideouts, according to sources close to the government. Thus, it has become mandatory to create a legal environment, allowing them to be registered as legitimate children, since they are born to couples united by the fatiha (according to sharia law).

The Civil Concord is not favorable among the opposition circles that believe the law of retaliation (an eye for an eye, a tooth for a tooth) is the best way to build the country on republican foundations.