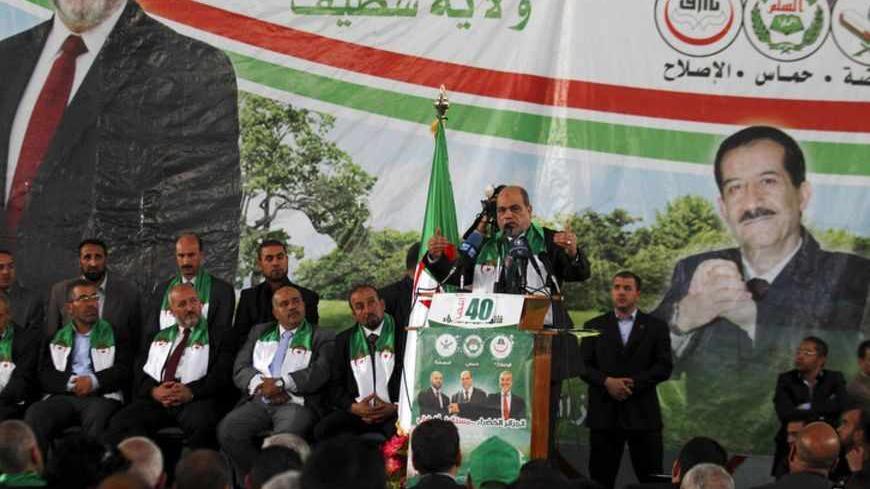 Bouguerra Soltani, the leader of the Islamist party Movement for a Society of Peace (MSP), which is part of the Algerie Verte (Green Algeria) alliance, speaks at a campaign rally in Setif, about 300 km (186 miles) east of Algiers, May 5, 2012. - REUTERS/Zohra Bensemra

Bouguerra Soltani's Movement for the Society of Peace (MSP) and its political party, the Algerian Front for Change (FC), headed by Abdelmajid Menasra, have been both seeking to consolidate the Islamist Union in Algeria.

This initiative goes far back in time, but the struggle for leadership has delayed its completion. However, their voice is being heard on the domestic political level. Thus, concerned parties have been rushing to join forces and form an alliance.

In light of the preparation of the bill to amend the constitution, which is to take place on the eve of the 2014 presidential elections, and given the resulting political challenges, Islamists have decided to stop operating as divided groups. Nevertheless, one should note that the MSP, which is to hold its fifth annual conference on May 2 and May 3, has no political weight. In fact, the MSP has been working since 2004 in a coalition with the Presidential Alliance, but left it in January to form the Green Algeria Alliance (GAA).

The GAA represents a collation of several Islamist groups (the MSP, El-Islah, and the Islamic Renaissance Movement, "IRM") formed on March 7, 2012, to prepare for the 2012 legislative elections.

The collapse of the Presidential Alliance — which included the MSP as a full member, the National Liberation Front (NLF) and the National Rally for Democracy (NRD) — and which was formed in light of domestic crises, has noticeably undermined the MSP that has been trying to clean up its tarnished reputation. In the same vein, it could be said that the FC has also been reduced to a caricature of itself on the domestic political level.

Unlike Morocco, Tunisia and Egypt, Algerian Islamists have faced a major setback, a first since the Arab Spring uprisings. This is due to the "blood-spattered years" of the black decade (1991-2002) when the Armed Islamist Group (GIA), whose militants were affiliated with the Islamic Salvation Front (FIS), suffered over 200,000 dead.

This has left the traumatized population with bad memories. People no longer wish to pin their hopes on these parties.

Therefore, it can be said that a unification of the MSP and the FC is likely imminent. However, a name for this new political coalition has yet to be determined. "The majority of militants wish to see this sacred union materialize. [The MSP’s founder] Mahfoud Nahnah was torn apart when he saw his faithful followers disperse," said the communication officer at the FC, Idriss Rebouh, speaking to Al-Monitor.

A new chapter of history has opened for these two blocs that have been seeking to materialize the union of Islamists through “providing a basis for the debate.”

In the same context, the joint committee that has been established to this effect has been preparing “for regional meetings in the coming days.”

The idea “of holding a joint summer school” in this context as well as a seminar scheduled to be held on June 14, which marks the death of Nahnah, are still valid.

Rebouh, a former executive in the MSP and the FC’s current communications officer, added to Al-Monitor that “it has become imperative for these Islamist parties to join hands and to form a single unit that would impose itself on the national political arena. Working in divided groups is against the founding principles of the late Sheikh Mahfoud Nahnah, who had always acted as a unifying element.”

Many actions are underway to this end at the militant base and across different regions of the country. There is even talk about gathering former Islamists and brothers of the MSP, who have been dispersed given the political situation in the country, especially following the rise of President Abdelaziz Bouteflika to power in 1999.

Thus, the MSP has sent out invitations to all its former executives to attend its fifth congress, even those who have formed their own parties.

Nevertheless, as the 2014 presidential elections approach, the two blocs that espouse the ideas of the late founding father of the MSP, Nahnah, still lack a common Islamist candidate for the possible future union.