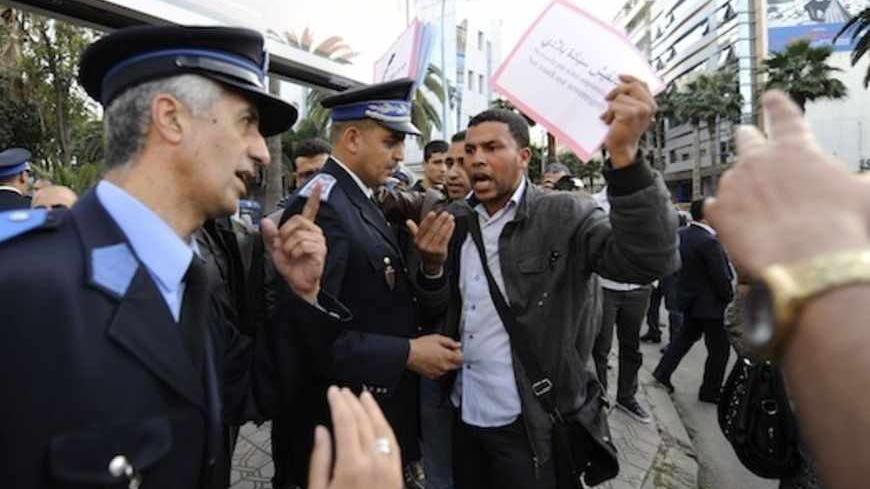 A protester argues with police officers as he protests against plans to broaden the mandate of UN peacekeepers in the disputed Western Sahara, in Casablanca, April 22, 2013. - REUTERS/Youssef Boudlal

The MINURSO is first and foremost a UN-led peacekeeping operation in the region. It was established April 29, 1991, by UN Security Council resolution No. 690. At the time, the situation was hunky-dory, and things were great for Morocco.

Lately, MINURSO's goal of a referendum to determine the region's future and secure population movements is likely to expand, to include a mechanism for monitoring human rights in Western Sahara. The pertinent question is whether human rights are respected there. This project, which is supported by many countries, will be subject to a vote at the UN Security Council.

A preliminary report was published in September, following an August 2012 visit to the occupied territories in Western Sahara by a delegation from the Robert F. Kennedy Center for Justice and Human Rights, headed by its president Kerry Kennedy and comprised of jurists and international human rights experts.

In Algeria, the National Consultative Commission for the Promotion and Protection of Human Rights, chaired by Farouk Ksentini, has always campaigned for the expansion of the MINURSO, in light of the various reported violations in the region. This organization says that the Sahrawi continue to suffer "from many forms of repression," and that "it is a matter of decolonization, and the UN cannot continue to act against its principles."

Speaking at an international conference on the rights of women in the Sahara, Ksentini was far from lenient towards Moroccans, who objected to such rights.

In order to maintain pressure on Morocco, the Sahrawi organized a conference, held from April 19 to 21, in the Sahrawi refugee camps in Algeria to discuss "the situation and the right of Sahrawi women to resist." Many delegations, including some from abroad, attended this event. The delegations have come "to call on the world and the Security Council to put an end to the suffering of the Sahrawi people," said Sahrawi Arab Democratic Republic (SADR) President Mohamed Abdelaziz.

While the Security Council is set to hold a session to discuss the report of the UN Secretary-General on Western Sahara, the SADR has been calling on France "not to block" the process. Brahim Ghali, SADR's ambassador to Algiers, said that the main stumbling block to self-determination for the Sahrawi people is "the allies of Morocco in the Security Council, France in particular, that continue to block" Sahrawi rights.

For his part, Idriss Rebouh, head of the communication department of the Front for Change (FC) and a member of the Union of Arab Doctors, called the expansion of the MINURSO to include an international mechanism for monitoring human rights in the Sahrawi territories "a victory for human rights."

"The expansion of the MINURSO to include an international mechanism for monitoring human rights in the Sahrawi territories is commendable at many levels," Rebouh told Al-Monitor. "This would help keep a close eye on human rights in the territories occupied by Morocco and reduce, even if only to a small extent, the repression against Sahrawi citizens."

The MINURSO's expanded mandate, which will include a mechanism for monitoring human rights in Western Sahara, will be subject to a vote at the UN Security Council. It aims at "alleviating the suffering of the Sahrawi people," said a Sahrawi journalist who spoke on the condition of anonymity. The emergence of an independent Sahrawi state in the Arab Maghreb region has always been impeded on multiple levels. The SADR has called upon countries including France, which have sided with Morocco, to stop being biased against human rights.