Yemeni women marginalized even in death

Yemeni officials have prevented the body of a woman killed during the Dec. 5 attack against a Defense Ministry hospital in Sanaa from being buried in the official martyrs’ cemetery. 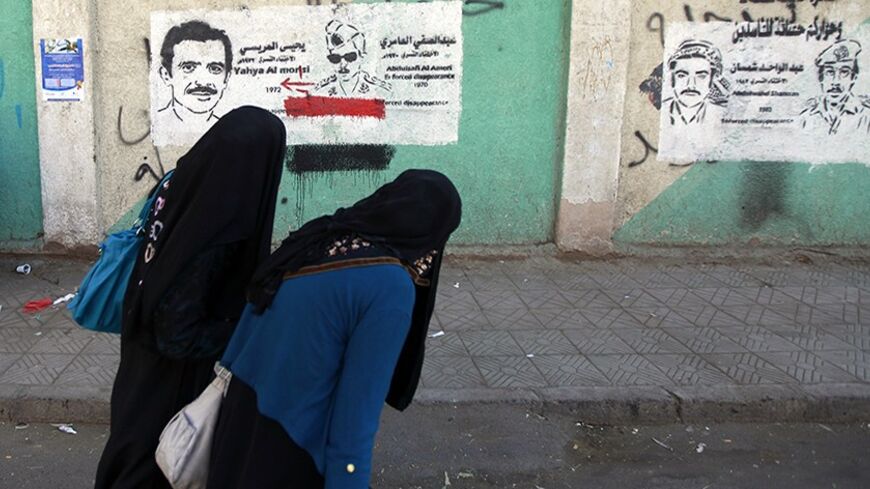 Women walk by a mural of a flag of the Yemen Arab Republic in Sanaa, Dec. 24, 2013. - REUTERS/Mohamed al-Sayaghi

It's a sad, painful time in Yemen. On the evening of Dec. 5, the day following the attack on the Al-Arida Hospital at Yemen's Defense Ministry that left 56 dead and more than 150 injured, I had dinner with a senior military official. A phone call he took involved the strangest discussion I have ever heard.

Speaking with the father of one of the victims of the previous day's massacre, the official insisted that the man’s daughter could not be buried in Martyrs' Cemetery, where male victims were being interred. That evening was the first time I realized that Martyrs’ Cemetery did not contain a single woman's grave, despite there having been dozens of female martyrs in Yemen over the years.

In Yemen, especially in the cities, women are not only marginalized in public life, but even after their death they are not given a grave that befits their memory and the sacrifices they made for this country.

Women in Yemen are usually the ones who give the most, yet they receive the least recognition. While women sometimes outperform men in countries where the sexes are afforded equal opportunities in education and employment, for this to occur in Yemen — a male-dominated country — is very unusual.

Although Yemen’s male and female populations are roughly equal in number, statistics indicate that girls have less involvement in education than boys do. This is especially true in rural areas, where the exclusion of women from public life is particularly pronounced.

Discipline is imposed on girls at home at an early age to safeguard their reputations, thus preserving their eligibility for marriage. As a result, girls are usually more serious students than boys are, albeit at the expense of a normal social life. However, poor scholastic performance can lead to forced marriage at an early age. More than 42% of Yemeni housewives were married before age 18, and about 8% of them were brides at 12.

Having recognized the gender gap in school enrollment, Yemen’s educational authorities devised a long-term strategy to increase female enrollment rates, with the goal of achieving a 95% female enrollment rate by 2015. But implementation of the strategy has been lackluster. In its 2012 annual report, UNESCO reported that Yemen would not achieve gender equality in educational opportunities by 2015 — nor even by 2025.

The marginalization of women is not motivated by purely social and cultural reasons, as is commonly believed, but also subject to political will. About a decade ago, the Yemeni authorities announced that they would begin introducing women into the military. This sparked an intense debate and the majority of parliament voted against the decision, motivated by a commitment to custom. However, the authorities remained committed to the move and a presidential decree created a very limited female military track. It passed peacefully and was accepted by society, while parliament stayed silent.

Yet, discipline and precision in performing tasks is not always the road to greater success when the responsibility level increases, and the few women who have assumed the leadership of ministries have not exhibited superior performance when compared to their male counterparts. Of the three ministries in the current government that are run by women, none were included in the lists of high-performing or low-performing ministries. This may be because the women-led ministries are not service-based ones, and thus are not scrutinized by the public. Their work is routine, and the main trait distinguishing female ministers is that they typically arrive at the office earlier than the men.

Although some of the working teams from the National Dialogue Conference (NDC) have passed resolutions imposing a quota for women, that will not necessarily strengthen the female presence in executive and legislative positions. This is because even the appointments made in the name of women’s rights in Yemen are subject to traditional political and elitist calculations. In other words, these resolutions might be less about empowering average Yemeni women of distinguished qualifications, and more about enabling elite women with ties to authorities to maintain their pre-existing privileges. Appointees include the heads of the Welfare Fund for Wounded, the Families of Martyrs of the Peaceful Youth Revolution and the Peaceful Southern Movement. The quota is also reflected in the fact that women hold 30% of leadership posts in the Supreme National Commission for Fighting Corruption, a high-level body that enjoys great sovereignty.

There is room for Yemeni women to compete in civil organizations, dozens of which are led by women. Some have actually succeeded in their work — in light of the weak competition from other women — while others have succeeded in marketing themselves and in increasing donors' interest in women's issues. Within the civil society context, many women have been appointed to the NDC, becoming well-known faces. The quota imposed by the international community on the NDC is the only thing that forced traditional professional elites to include women, and their involvement seems weak, a mere formality.

Yemen has a rich history of leadership roles for women, and former female rulers still garner admiration and acclaim. These rulers begin with the Queen of Sheba, who ruled beginning about 1,000 B.C., stretching to Queen Arwa, who ruled in the 12th century A.D. Their reigns were characterized by stability, diversity and prosperity — states rarely seen in Yemen's more recent troubled history. The Queen of Sheba's temple in the city of Marib remains one of the country's most renowned historical sites. Yemenis are proud of this distinction, and it serves a symbol of this country’s ancient history and the role of women in it. Today, however, the province of Marib suffers some of the country’s lowest rates of female school enrollment and employment.

The culture of strict feminine obedience results in Yemeni women’s absence from debates and discussions about their basic rights. Rather than worrying about quotas, Yemeni women are today struggling for equality in burial and honor for dying in national service. Burying Dr. Asmaa al-Thalaya, who died in the hospital attack, in the Martyrs’ Cemetery with the male victims would not have detracted from this honor. Ironically, burying her in another cemetery benefited another woman — Thalaya’s mother. The latter is only allowed to visit the grave of her husband (himself a martyr) in Martyrs’ Cemetery once a week. A high-ranking military official issued the decision that Thalaya not be buried in the same cemetery in accordance with the wishes of her mother, whose tears have not yet dried.

Women remain a constant topic in the rhetoric of politicians and partisans because they represent a crucial bloc of electoral votes. Yet, despite this rhetoric, only one woman won in the recent parliamentary elections, alongside 300 men.