The Kurdish peace process in Turkey faces a new obstacle as leaked documents raise suspicions that Turkish intelligence was behind the slaying of three Kurdish activists in Paris last year. 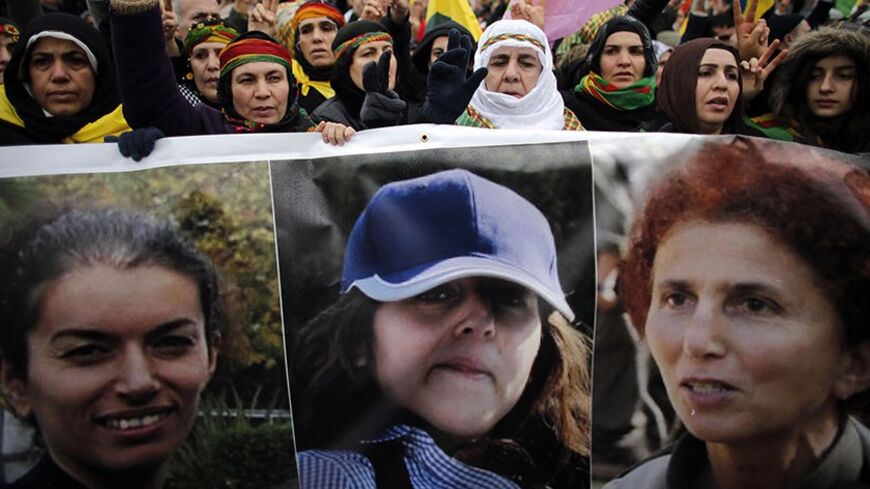 On Jan. 10, 2013, three women, members of the Kurdish diaspora in Europe, were found shot and killed in an information center run by the Kurdistan Workers Party (PKK) in Paris. The brutal executions sparked outrage among Turkey’s Kurds and raised serious concerns that an attempt was underway to sabotage peace talks between the PKK and the Justice and Development Party (AKP) government. PKK leader Abdullah Ocalan himself described the assassinations as an attempt to wipe out the peace process.

The French police, however, quickly caught a suspect, Omer Guney, who turned out to belong to the PKK just as the slain women and had even served as a driver to one of them, senior PKK member Sakine Cansiz. That’s how Guney got access to the building.

Following Guney's arrest, interest in the slayings began to wane in Turkey. The incident was almost forgotten until a few days ago, when two leaks sparked controversy over whether Turkey’s National Intelligence Organization (MIT) had a hand in the crime.

First, an audio recording posted on the Internet revealed a conversation between Guney and two purported MIT operatives. The exchanges suggest the three men were planning the killings. The purported MIT pair discussed with Guney some sort of checklist, advising him to wear gloves during the attack and being careful of security cameras around the building and suggesting escape routes. The person who leaked the recording claimed in a note to be a confidant of Guney's whom Guney had asked “to release this document in case something happens” to him.

As debate simmered over the recording, an alleged MIT internal memo hit the Internet. The document, titled “Sakine Cansiz” and dated Nov. 18, 2012, suggests that MIT engaged a person code-named “Legionnaire” for an “attack/sabotage/assassination” against PKK targets in France and paid him ($8,000) for expenses. The document, which bears a wet signature, is addressed to four MIT units.

Before I summarize MIT’s response and the ensuing reactions, it's important to recall MIT’s role in the talks with the PKK and the “settlement process” so as to fully convey the severity of the claim that the agency was behind the Paris killings. MIT and especially its chief, Hakan Fidan, have played a leading role in conducting both the peace talks in Oslo and the direct talks with Ocalan on the prison island of Imrali, as well as in planning and developing the peace process in general. Fidan participated personally in many of those meetings, and Ocalan is known to have developed confidence in MIT and Fidan in particular.

Given this background and regardless of whether the documents are authentic, those behind the leaks appear to be seeking to foment mistrust between the government and the PKK and undermine the peace process. The reactions of Kurdish politicians suggest that the revelations are taken seriously and that a certain degree of suspicion has emerged toward MIT.

Now let’s see what MIT said on the issue. An MIT statement released Jan. 15 maintained that the attempt to implicate it in the Paris assassinations aimed to discredit the agency, which has played an active role in the settlement process. It described the leaks as “an operation to expose functionaries involved in the process so as to render them incapable of carrying out their duties.” The statement went on to say that while “our agency has nothing whatsoever to do with the murders, an internal administrative investigation has been launched over the allegations.”

It is incomprehensible why MIT should worry about functionaries being “exposed” if the allegations are untrue. It is equally remarkable that the agency did not disown the document. Finally, if the situation merits an “administrative investigation,” one wonders why MIT chose to issue a denial before completing that investigation.

The ensuing reactions of Kurdish parliament members indicate that they too remain unconvinced by MIT. Selahattin Demirtas, co-chairman of the pro-Kurdish Peace and Democracy Party (BDP), said in remarks published Jan. 17, “MIT’s statement has failed to satisfy us. We were able to confirm that the audio recording is authentic. People who know the person in question well confirm that the voice belongs to him. And when it comes to the leaked paper, there are serious suspicions that it is a [genuine] MIT document. No one has said it is a fabrication. We will be closely following the issue.”

BDP lawmaker Altan Tan expressed misgivings and mistrust in even harsher terms. “If the document was not penned by MIT, then who penned it? They should answer this question first. If the document is not yours, then whose is it? Who produced it and how? If you are unable to find this out, then you’d better close up shop and go home,” Tan said.

Another BDP lawmaker, Ayla Akat Ata, submitted a parliamentary query addressed to the prime minister, asking whether “MIT had been in contact with Omer Guney prior to the Paris assassinations.”

The recording and the document seem to have raised serious suspicions over possible MIT involvement in the deaths. But even those who openly voice those suspicions do not put the blame on MIT as a whole. That is, no one claims that Fidan was playing the peacemaker publicly while ordering assassinations behind the scenes. The suggestion is that while top MIT officials made efforts in the peace process, a clique within the agency sought to sabotage both the peace process and their own superiors by orchestrating the assassinations and perhaps through other means.

Yet, regardless of whether MIT was involved in the Paris killings, its failure to conduct an impartial, efficient and convincing investigation into the allegations will dampen Kurdish confidence in MIT and its role in the peace talks and further fuel suspicions.

There has been no indication so far that the Paris deaths have had any negative impact on the peace process. It's obvious, though, that MIT’s failure to provide satisfactory and convincing answers over its suspected involvement in the slayings will make the process more fragile and vulnerable to external influence. Turkey is eagerly waiting to see what sort of an investigation its intelligence agency will conduct and what explanation it will offer to the public.