Turkey should consider a more balanced and less personalized approach to dealing with the Kurdish question. 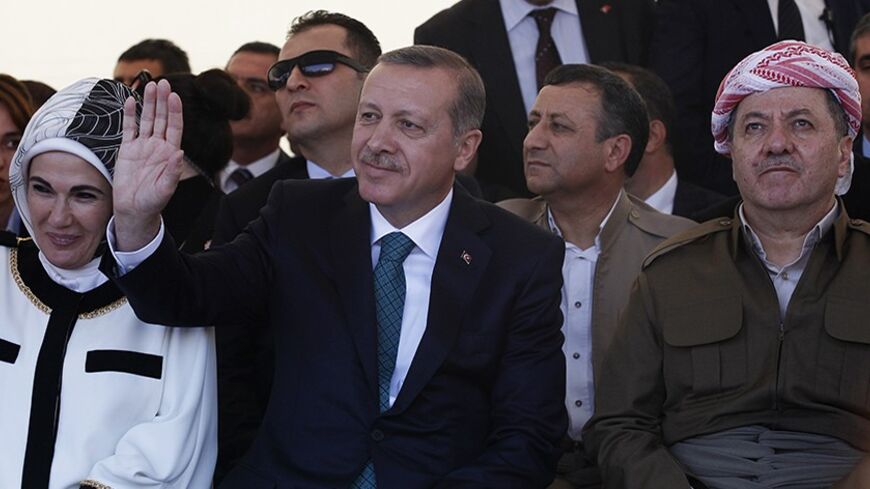 Turkish Prime Minister Recep Tayyip Erdogan can be lauded for addressing the Kurdish problem in ways his predecessors were unwilling or unable to do. In Turkey, he has recognized the Kurds and their language rights, negotiated a cease-fire and “peace process” with Kurdistan Workers Party (PKK) leader Abdullah Ocalan and even publicly referred to Kurdistan in a recent ceremony with Kurdish leaders in Diyarbakir. Erdogan also has successfully negotiated with the Kurdistan Regional Government (KRG) in Iraq, assuring Ankara’s security, commercial and energy interests in ways that were unthinkable just five years ago.

Despite these efforts, Erdogan’s strategies have not necessarily moderated Kurdish transnationalism or fully assured Turkish interests across borders. To be sure, the Ankara-KRG alliance has assuaged an important segment of Iraqi Kurdish society and Kurds tied to KRG President Massoud Barzani. Barzani has become Turkey’s interlocutor in addressing Kurdish issues in Syria and Turkey, and more recently part of Erdogan’s re-election campaign in southeast Turkey. This alliance is also furthering Barzani’s aim to become leader of all the Kurds and has reinforced the KRG’s dependence on Turkey and need to coordinate its nationalist agenda with Ankara.

Still, as Erdogan expands his Kurdish file to include the Kurdish problems in Turkey and Syria, he has raised the expectations of what Ankara should provide to other Kurdish groups. Taking on three Kurdish issues simultaneously via Barzani may have captured one significant component of Kurdish society, but it has limited Ankara’s ability to influence groups that challenge Barzani's power — groups that have increased over time. In fact, elevating Barzani in the absence of Iraqi President Jalal Talabani and a weakened Patriotic Union of Kurdistan (PUK) has enhanced power struggles inside Iraqi Kurdistan and heightened the polarization between two emergent Kurdish nationalist power centers: followers of Barzani and supporters of Ocalan.

In some ways, employing Barzani to promote Turkish interests and mediate Kurdish nationalism across borders has backfired. For instance, inviting Barzani to the historical Kurdish city of Diyarbakir alongside renowned Kurdish singers Siwan Perwer and Ibrahim Tatlises in November 2013 certainly evoked Kurdish nationalist sentiment and support. It was a deeply symbolic moment, bringing together distinguished Kurdish leaders for the first time in a historical Kurdish city. Yet, beyond the initial hysteria and symbolism, the meeting has raised criticism by many Kurds of its purpose (an election campaign for Erdogan) and outcomes, and deepened the divide between the Barzani and Ocalan camps.

Similarly, in Syria, Erdogan had hoped to use Barzani and the KRG as a counter-relationship to the PKK and Democratic Union Party (PYD), as well as bring together a Syrian opposition that originally excluded the Kurds. Yet, these attempts to marginalize the PYD have actually enabled the PYD to gain ground. Instead of unifying with Barzani and the KRG, which has been hosting over 200,000 Syrian Kurdish refugees, the PYD has affirmed its own autonomous region in Syria that challenges Barzani's and Turkish influence. Despite efforts to come together at the Geneva II conference, the Kurdish groups remain divided and the PYD continues to oppose radical Islamic groups, some of which have made their way to Syria through the Turkish border.

Indeed, Ankara’s ability to manage multiple Kurdish fronts is undermined by internal Kurdish power struggles, which have re-emerged with the rise of the Kurdistan region’s oil wealth, uneven economic development and the Syrian crisis. Turkey is also attempting to manage Kurdish transnationalism in a dramatically different regional context than even five years ago. Alliances and the balance of power have shifted, borders have become porous, ungoverned spaces have emerged in once stable states and minority groups are making claims for group rights. Whereas Ankara could once coordinate with Damascus, Tehran and Baghdad to control Kurdish nationalists and secure border areas, it currently has limited regional capitals in which to assure mutual support.

While Ankara did not create these trends, it has helped fuel power struggles that challenge regional stability and economic development. The personalized nature of the Erdogan-Barzani alliance has developed as the PUK lost power and the Goran movement has emerged as a key political actor in the Kurdistan region, and as PKK-influenced Kurdish groups have asserted influence in Turkey and Syria. The Kurdish political arena is now one in which various groups are seeking to level the playing field, secure similar opportunities and redistribute newfound wealth and power equally among themselves. This situation makes it increasingly difficult to elevate one Kurdish group or leader over the others without enhancing existing rivalries, and obstructing any potential for effectively resolving the transborder Kurdish problem.

Given Ankara’s continuing influence in the region, despite current domestic challenges, these trends suggest the need to fine-tune Turkey’s approach to managing the Kurdish issue. The option is not about choosing between the KRG and Baghdad, but pursuing a more balanced and less personalized approach that reaches out to institutions and different Kurdish leaders that influence distinct regions. These trends also suggest the need to recalculate perceived or real threats to regional stability. Rather than focusing on the potential dissipation of Sykes-Picot or Kurdish statehood, it would be more effective to assess where real power centers lie within and across the Kurdistan region, and their potential for change. This focus involves addressing the shifting balance of power dynamics and finding ways to better secure ungoverned spaces in Iraq and Syria, which directly affect Turkey’s national security interests.