Although many Kurds do not like the leftist and secular agenda of the Kurdistan Workers Party (PKK), the PKK has shown great resilience, in part as the result of the fragmented Iraqi and Syrian states and political missteps by Turkey. 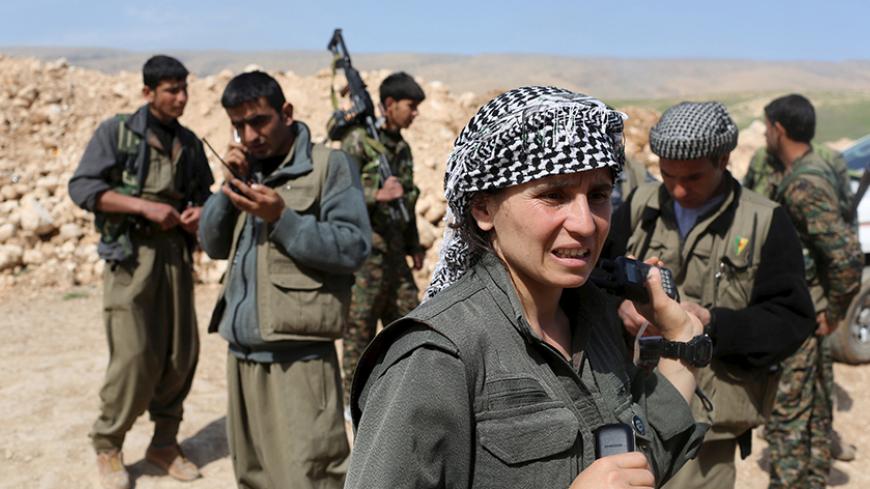 Kurdistan Workers Party fighters prepare to join others near a position that has been hit by Islamic State car bombs in Sinjar, Iraq, March 11, 2015. - REUTERS/Asmaa Waguih

Escalating violence between the Turkish military and the Kurdistan Workers Party (PKK) reflects yet another broken cease-fire in the 30-year conflict. Turkey has recommenced a cross-border bombing campaign and declared martial law in its southeastern Kurdish region while the PKK has relaunched deadly attacks against Turkish forces, institutions and assets. Still, this round of violence reflects a more protracted PKK problem. The PKK now controls its own deep-state institutions and satellite groups across Turkey, Iraq, Syria and Iran and has been empowered in the fight against the Islamic State (IS). It has become as much a trans-border Kurdish nationalist movement as it is a terrorist group. Any attempt to effectively counter the PKK will require dis-embedding it from Kurdish society and increasing the costs of conflict beyond a military campaign.

Those who lived through the 1990s in Turkey have reason to worry about the renewed violence. During that period, southeastern Turkey was a deadly battle zone, defined by mass killings, extra-judicial arrests, torture, population displacements and full-scale destruction of towns and villages by the Turkish military and PKK militants. In those days, you could hear and see the nightly bombardments that lit the sky from the Iraqi Kurdish border town of Zakho. Violence was driven by xenophobic nationalisms: Turkey’s refusal to recognize and respect Kurdish ethnic identity and the PKK’s radical agenda that sought nothing less than an independent Kurdish state.

Still, Ankara could count on superior military capabilities and strong regional allies to help quell the PKK. In northern Iraq, it conducted cross-border raids of PKK militants — an agreement negotiated with Baghdad during the Iran-Iraq War and tolerated by the newly created Kurdistan Regional Government (KRG). Ankara also cut PKK support from Tehran and Damascus, especially its bases, training facilities and networks in the Syrian-controlled Bekaa Valley. The 1998 Ankara agreement not only ended the Assad government’s backing of the PKK, but led to its expulsion from Syria, capture and imprisonment of its leader Abdullah Ocalan, and declaration of a “unilateral PKK cease-fire,” which lasted from 1999 to 2004.

Having been virtually incapacitated, what explains the PKK’s resilience and revival? The PKK has directly benefited from the fragmented Iraqi and Syrian states and their ungoverned spaces. After having been expelled from Syria, the PKK found a new base in the Qandil Mountains, then part of an international safe haven in Iraqi Kurdistan, where it has developed and deepened institutional networks within a larger Kurdistan Communities Union (KCK) that includes offshoots in Syria (Democratic Union Party, or PYD), Iran (Party for a Free Life in Kurdistan, PJAK), and Iraq (Kurdistan Democratic Solution Party, or PCDK) alongside its armed wing, the People's Defense Forces (HPG).

These PKK-Kurdish nationalist networks have expanded and have been reinforced in the campaign against IS. Since 2014, PKK forces have been effectively fighting IS in Iraq alongside Jalal Talabani’s Patriotic Union of Kurdistan (PUK), Iranian Quds forces, Shiite militias, Iraqi security forces and Yazidi fighters. In Syria, PYD forces have been battling radical Islamic groups even longer, since the civil war started in 2011, and continue to serve as coalition local partners against IS.

PKK battlefield gains have been fueled by Turkish leader Recep Tayyip Erdogan’s political miscalculations. Erdogan’s neglect of the Syrian Kurdish town of Kobani during the IS onslaught, his attempts to counter the PKK through KRG President Massoud Barzani, the June election success of Turkey's Kurdish-dominated Peoples' Democratic Party (HDP) and the failed “peace process” have raised Kurdish expectations of a political end state that, at minimum, includes some form of “democratic autonomy.”

Consequently, the PKK currently enjoys large support across Kurdish society, even if most Kurds renounce violence and the PKK remains a designated terrorist group. Many Kurds argue that if a vote were taken today across the four states in which Kurds live, Abdullah Ocalan and not Barzani would be elected as Kurdish leader. Part of this popularity is tied to the attempt to level discrepancies between Kurdish groups. Over the past decade the PKK has come to represent the “other Kurds” in Syria and Turkey who seek nothing less politically than what Iraqi Kurds have attained, while also challenging Barzani’s power and leadership. These nationalist trends, alongside the KRG’s need for a remaining card to leverage Ankara, have prevented Barzani from expelling the PKK from Qandil or fighting the PKK as it did in the 1990s.

The PKK has also used its societal reach to tap into deeply aggrieved populations. It is not PKK fighters from Qandil who are engaged in the violence in Turkey today, but the tens of thousands of young people living in urban areas who have been trained to fight by the PKK, but who represent their own local militias. Militant Kurdish youth groups such as the Patriotic Youth Movement (YDG-H) have declared “autonomous regions” in southeastern Turkey and claimed responsibility for the deadly attacks against Turkish security forces.

Indeed, many Kurds continue to loathe the PKK, most notably rival Barzani groups and conservative Kurds who have little empathy for the PKK’s militant leftist, secular agenda. Still, the PKK and its satellite groups will thrive as long as Erdogan continues to ignore the political and ethnic aspect of the Kurdish problem in Turkey, Syria and Iraq remain fragmented and threatened by radical Islamic groups and Ankara alienates key regional states while supporting unscrupulous sub-state actors. The PKK will also continue to benefit from the proxy war between Sunni and Shiite camps and support from Syria, Iran and Iraq, even if these states reject Kurdish statehood or expanded Kurdish autonomy. Under these conditions, any strategy that seeks to counter the PKK by delineating it from the larger Kurdish problem, or that conflates PKK and IS terrorism, is bound to fail.