The structure of the current US-brokered negotiations between Israelis and Palestinians allows both sides to evade compromise. 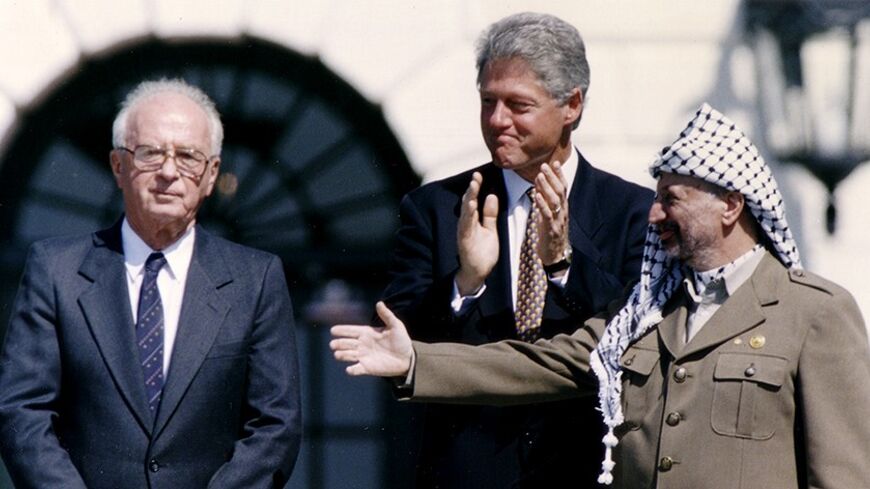 When the Palestine Liberation Organization (PLO) agreed to recognize Israel and sign a memorandum of understanding in 1993, the organization was experiencing an all-time low. The PLO had been routed from Beirut, and later from Tripoli. An internal struggle within the Fatah movement had erupted under the name Fatah al-Intifada, and the Berlin Wall had fallen, leaving Palestinians without their major international ally.

The agreement reached as a result of secret talks in the Norwegian capital, Oslo, allowed for the return of tens of thousands of Palestinian fighters, leaders and their families, but it failed to produce peace, independence or even a suspension of Jewish settlements. The West Bank was divided into areas A, B and C. In justifying their acceptance of this inadequate deal, Palestinians expected that the five-year interim agreement would soon translate into an independent state.

Now, 20 years later, Palestinian officials are finding themselves in a somewhat similar situation. The Arab world is deeply divided along sectarian lines. Egypt, the largest and strongest Arab country, is no longer involved in any Palestinian-related issue. On the contrary, Egyptians are extremely upset with the Hamas leadership in Gaza and have closed the Rafah crossing point after having demolished the tunnels. Even the United Kingdom, which was the colonial power just prior to the Nakba, is now publicly stating that the Palestinian-Israeli conflict is not one of its foreign policy priorities. Meanwhile, settlers have doubled since 1993, and the Gaza split has left Palestinian leaders even more vulnerable to pressure, similar to that which Arafat faced prior to the Oslo signing.

On the other hand, the Palestinian resistance movement in all its forms is also at an all-time low. With the exception of the Boycott, Divestment and Sanctions movement and the Friday anti-wall demonstrations, Israel is enjoying its longest relatively peaceful years, as the Gaza rockets have totally stopped and the Ramallah-based leadership is actively involved in fighting any attempts at violent resistance.

This brings to the forefront whether the time is ripe for a deal and if such a deal will be ultimately for the good of Palestinians. On the surface it appears that whatever deal is being cooked up in secret will not be of immediate benefit to Palestinians. Since politics is the art of the possible, and the scoreboard is so much tilted against Palestinians, it is doubtful that any framework agreement will meet the aspiration of most Palestinians. It is not surprising that hard-line Israeli Foreign Minister Avigdor Liberman has called Kerry’s ideas “the best Israel can hope for.”

The glimmer of hope for Palestinians — if there is one to be found — is in the invention of the concept of a framework agreement. The framework concept was talked about before the start of direct talks and failed to make headway.

Reaching a framework agreement without reaching a peace deal allows both sides to work out issues with their constituencies, with each side claiming not to have signed away issues that have national consensus. Of course, a framework deal is another term for an interim agreement — a term that Palestinians strongly oppose. When US Secretary of State John Kerry ended another marathon of talks with the Palestinian president on Jan. 4, chief Palestinian negotiator Saeb Erekat went overboard to reject that this would be another interim agreement. “What Secretary Kerry is doing — and let me repeat it in front of him — is not an interim agreement. It’s not a transitional period that’s beyond us. We’re working hard to achieve an agreement on all core issues.”