Amid ongoing regional turmoil, the peace talks brokered by the United States are out of the spotlight. 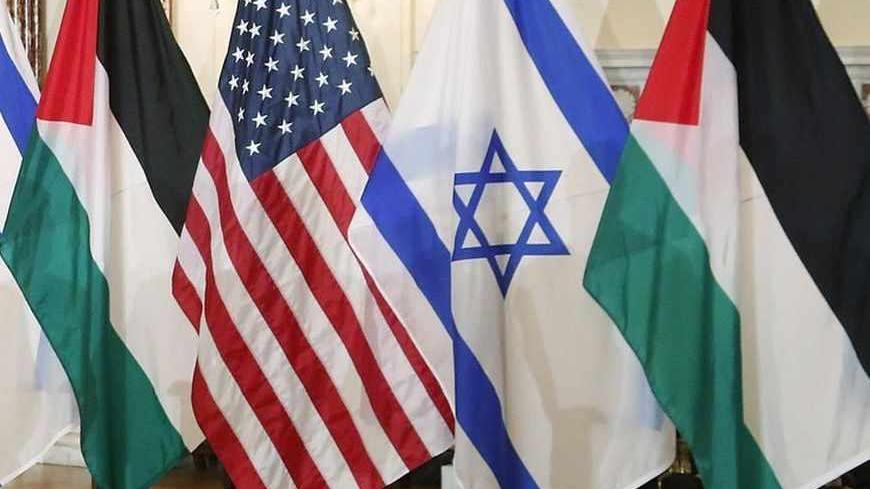 Palestinian, Israeli, and US flags displayed at a news conference to announce further peace talks at the State Department in Washington, July 30, 2013. -

US Secretary of State John Kerry seems to have succeeded in one important aspect regarding the Palestinian-Israeli peace talks. He publicly stated that he had received a commitment from both sides that the talks would be kept secret, and so far it appears to have worked.

After Kerry’s well-publicized July 19 statement in Amman and the highly visible opening session of the talks in Washington on July 29, both sides appear to have deliberately avoided the spotlight. The local media was full of stories about journalists trying to determine where the Jerusalem meeting was to take place, but to no avail. In the end, the media was forced to publish the only photo released by the negotiators of the Jerusalem meeting, held at an undisclosed location. It might prove to be more difficult to avoid the spotlight during the next meeting planned for Jericho or Ramallah simply because of their smaller size and limited number of possible locations.

While the motivation for keeping the negotiations low-profile might be understandable, it is harder to comprehend why the talks have not produced public expressions of support. So far only two public events have taken place involving Palestinians and Israelis. One was a visit by Palestinian legislators to meet their counterparts in west Jerusalem at the Knesset. Much attention was paid to a Palestinian flag being present in the Knesset alongside the Israeli flag. The second meeting took place last week in the Hungarian capital of Budapest and also involved legislators from both sides.

Very little cross-border media activity has taken place, however. Neither side has given a major interview to the other side’s media nor does it appear that the leaders have conceived media strategies to try to generate support for their points of view. When CNN contacted the Palestinian representative in Washington to counter the viewpoint that the Israeli ambassador had given CNN’s Fareed Zakaria July 26 on the program GPS, the Palestinian official declined, citing the request by Kerry to keep a low profile. The network eventually interviewed a Palestinian columnist to present a semblance of balance. It is unclear whether the absence of a Palestinian media strategy is the result of yielding to the American request or a reflection of incompetence and lack of proper planning.

The absence of a public or media strategy has not stopped attempts to find a back channel. Al-Monitor has learned that former US peace envoy Dennis Ross and Israeli American think tank expert David Makovsky are involved in a back-channel process with a leading PLO official in Ramallah. Palestinians and the rest of the world are aware that the 1993 memorandum of understanding between the Palestine Liberation Organization (PLO) and Israel was the result of the Oslo back channel rather than the bilateral talks under way in Washington.

At the time, the Israelis had not officially recognized the PLO, which was directing the talks in Washington. The back channel made sense in that Israel was able to talk directly to Palestinian leaders, despite not publicly recognizing them. No such need exists today, but some believe that back-channel talks allow for alternative ideas and suggestions to be tested without having to officially present them and risk having them abruptly rejected.

The lack of public meetings and media coverage appear to reflect a conviction that there is no need during this sensitive period to drag the public into talks that many still believe have little chance of success. As one former Palestinian negotiator likes to say, “Blessed are those with low expectations, for they shall not be disappointed.”

In the past we have seen what happens when the public is disappointed. The failure of peace talks inevitably leads to a spike in discontent and violence. The current talks are able to maintain a low profile in part due to the major events taking place in the region. With at least four surrounding Arab capitals engulfed in unprecedented violence, there has been little attention given to the Palestinian-Israeli negotiations. In a strange way, some believe that the tsunami hitting nearby Arab countries might be advantageous to the talks.