The Kerry Talks:Why the US Needs to Be in the Room

Having US officials involved in every step of the negotiations might pressure Israel to compromise. 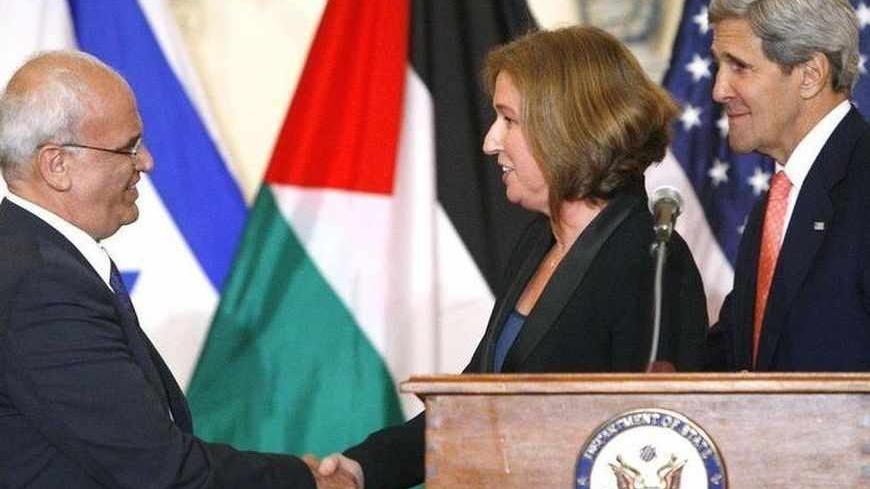 One of the most abused and repeated claims made in Washington is that the Americans cannot want peace more than the parties in the Middle East. The reason why this statement is so false is that the Americans have had a long history of involvement in the Middle East conflict, almost exclusively on behalf of the Israelis. Whether they want to admit it or not, the United States has for decades sided privately with the Israelis while publicly claiming to be neutral. Serious investigation into the motivation for this bias always points to domestic politics as the major, but not exclusive reason for it.

Yet despite the Palestinians' knowledge of the Americans' true position, they have generally wanted the United States to be involved. In fact, they have demanded it. When the Quartet — the European Union, Russia, the United Nations and the United States — proved incapable of making headway against Israeli obstinacy, the Palestinians turned to Washington as the party that could, if it chose to, apply direct or indirect pressure on the Israelis.

Having reached this point, the Palestinian leadership decided to maximize use of the United States and insist that American negotiators be present at all levels of the current talks. For the Palestinian side, the idea of trilateral, rather than bilateral, talks changes the dynamics of the negotiations for the better. By getting the United States into the negotiation room, the Palestinians are hoping that Washington will square its public posture — which has been rather fair and in sync with the international position on Palestine — and its real position in shielding Israel from the rest of the world. Palestinian thinking is that through their Arab and Muslim allies, they can help ensure that the Americans remain honest in the talks or bear the fruits of overt bias in the already boiling Middle East. Having US negotiators in the room also provides a sense of continuity that might help ensure that the basic issues of the sovereignty of the Palestinian state, equality of the land swaps (in size and quality) and genuine sharing of Jerusalem (especially the Old City) are reached.

While Palestinians are not expecting absolute fairness from the Americans, they are hoping that the cost of failure, that is, its ramifications on foreign policy and the strategic interests of the United States, is such that it will help produce a fairer US role in these talks.

Students of the Arab-Israeli conflict know generally the contours of any viable peace agreement that the majority of Israelis and Palestinians would agree to in a public referendum. Most neutral observers agree that such a result should include a viable, contiguous Palestinian state more or less along the 1967 borders, with small land swaps, primarily exchanging three Israeli settlement blocks and creating a link between Gaza and the West Bank; sharing Jerusalem’s holy places; and a fair and agreed upon (i.e., by Israel) resolution of the Palestinian refugee problem. The Arab Peace Initiative, approved by the Arab League and the Organization of Islamic Cooperation, is seen as a reasonable offer, exchanging Israeli withdrawal to the 1967 borders for normalization of relations with 56 Arab and Islamic countries.

The difficulty then is less the actual results of the talks and more how to get the participants to accept these broadly accepted compromises that both people can live with. Having American officials at every step of the way will go a long way toward helping ease the parties (primarily the Israelis) toward a position of accepting these basically foregone conclusions that are widely accepted as the price for peace.

As the Israeli occupation continues, and Israeli occupiers show little sign of nearing the end of the 46-year-long nightmare they have caused the Palestinians, increasing numbers of countries are no longer buying the old Israeli excuses. The only remaining superpower has stood by Israel while publicly refusing to abandon the accepted international requirements for peace. Having US officials in the negotiating room will present the Israelis with the difficult choice of accepting the requirements of peace or risk losing their last international friend and ally.